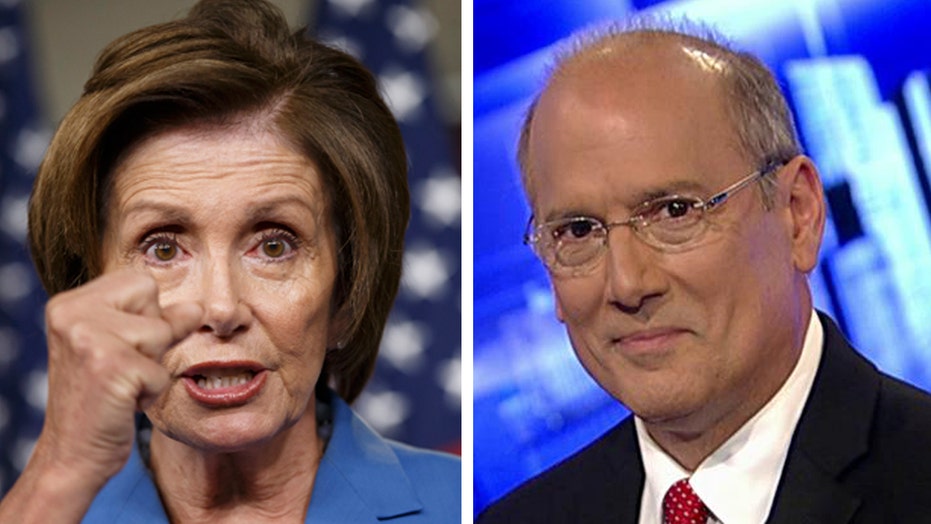 This is a rush transcript from "The Kelly File," August 4, 2014. This copy may not be in its final form and may be updated.

SHANNON BREAM, GUEST HOST: New details tonight on an epic incident in Congress involving House Minority Leader Nancy Pelosi and Republican Congressman Tom Marino. It all happened during debate over an immigration bill late Friday. Congressman Marino called out Democrats for playing politics after failing to address the border crisis when they could have. Listen and watch.

REP. TOM MARINO, R-PA.: In 2009 and 2010 they had the House, the Senate, and the White House and they knew this problem existed. They didn't have the strength to go after it back then but now they're trying to make a political issue out of it now.

BREAM: Well, that set off Congresswoman Pelosi, who was speaker of the house way back at that time that they were talking about. As Congressman Marino finished, Miss Pelosi confronted him in a very rare breach of etiquette. Watch your lower right-hand of your screen.

MARINO: We need to line up and protect this border from the people coming across.

BREAM: And it didn't stop there. As the congressman walked away, Congresswoman Pelosi stormed across the aisle again waving her finger. Watch and listen. Even fellow Democrats appear surprised.

UNIDENTIFIED WOMAN: I yield one minute to the gentleman from Washington, Adam Smith.

UNIDENTIFIED MAN: Gentleman from Washington is recognized for one minute.

BREAM: What was she doing? Well now, in a prime time exclusive, Pennsylvania congressman, Republican Tom Marino joins us live. Good to see you, Congressman.

MARINO: Thank you. It's a pleasure to be here.

BREAM: All right. So, I have to ask you. You were out there, you were making your remarks. Were you sort of surprised about her approaching and what was happening?

MARINO: I wasn't surprised, but it's just a breach of protocol. I had never seen it and my colleagues, certainly they have never seen it. But look. Anything she does will not surprise me anymore.

BREAM: She was clearly upset and I understand this conversation continued. Can you tell us about any further words that were between the two of you after what we saw there?

MARINO: Sure. And when she came over the first time she called me a liar, you're a liar, this isn't true. And you heard what I said about -- I was a prosecutor for 18 years. So, I did my research, my homework and told her about that and said to her that you might want to try that.

BREAM: But was there one?

MARINO: No. First of all, if she wanted to remind me, she could have asked me to yield, to respond to make a statement. She could have asked for more time on the floor. She didn't. She just simply was losing it and when I finished and said, you know, I must have struck a nerve here, then she came back and followed me up and said that I was insignificant.

BREAM: What was the context of that?

MARINO: She just -- she looked very bizarre, very angry to the point where she just said you are insignificant. And you know, I can take that. As I said, I was prosecutor for 18 years. I was threatened by drug dealers, murders, and organized crime. This was a walk in the park. I just suggested to her that we go off the floor and so there wasn't a scene and, again, she told me I was insignificant.

She's telling really my people and my district they're insignificant. She's telling the American people who aren't royalty because there is a fair number of people who act like royalty and that was a primary example of it and I just simply said you're acting arrogant and let's discuss this and then she was escorted off the floor by the sergeant of arms and someone from her side of the aisle and I think another security person.

Look, I'm a street fighter. I'm not going to take this from anybody. I'm a gentleman. I was. I think that's really what unhinged her. But I'm just not going to tolerate that when --

BREAM: Did you apologize?

MARINO: I did not apologize.

BREAM: She said she accepted your apology.

MARINO: Right. And they were scolded for that.

BREAM: Do you want an apology from her?

MARINO: No. I want her to apologize to my constituents and the Americans people. I don't need an apology from her. I went over and told her with - - the leader and other woman said, this was not directed at you. I said I wouldn't do that. She put her hand out to shake my hand. I shook my hand, and she said, thank you and something else. We got into a little bit of discussion about the children, I do a lot of work with children. But then I said, look, again, I don't want to discuss anything else. This wasn't directed at you. She put her hand out, she shook my hand and said thank you, and we went on our way.

BREAM: All right. We can report there was at least a handshake.

MARINO: There were two handshakes actually. And, you know, I hold no malice. This is -- again, this is something that I wouldn't even have brought up until I heard the fact that she said that she accepted my apology. And, again, that was their way of just covering up what she had just done, which is a total breach of decorum in the House of Representatives from the speaker of the House or former speaker.

BREAM: All right. Congressman Marino. Good to see you tonight.

BREAM: The door is open for, you know, Minority Leader Pelosi to come here to "The Kelly File" and tell her side as well.

MORINO: Yes. People can read on my Twitter @RepTomMorino, we'll talk about it.

MORINO: Thank you so much.