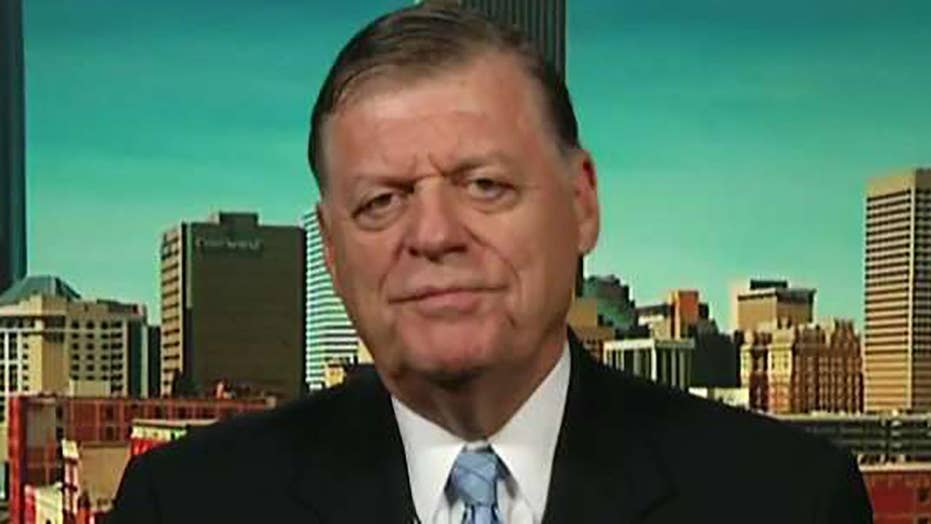 Rep. Tom Cole on the impact of tariffs on US farmers

Oklahoma Congressman Tom Cole discusses on 'Your World' how farmers and ranchers are reacting to escalating trade tensions with China.

This is a rush transcript from "Your World," July 6, 2018. This copy may not be in its final form and may be updated.

ZIPPY DUVALL, PRESIDENT, AMERICAN FARM BUREAU FEDERATION: Our message to the president is, we're patriots. We want to be there to support you. You're our president. But we have to get this done in a timely manner.

NEIL CAVUTO, HOST: Well, they have been patient.

And the read from the American Farm Bureau Federation president Zippy Duvall talking with me earlier on Fox Business Network is that there is a limit to our patience, because we're getting hit hard right now.

When you think about it, everything from soybeans to wheat, to barley, and all, they all trade on the commodities markets, the future markets. And a lot of those prices have been tumbling. Now, to be fair, a lot of those prices were headed south long before Donald Trump became president of the United States. This trade rift that has now turned out to be more a lot more involved has obviously accelerated that.

But the read now from Republican Oklahoma Congressman Tom Cole.

Congressman, very good to have you, sir.

COLE: Well, there is.

This -- I'm from a part of the country that really doesn't gain from these tariffs in any way, a big agricultural district, over 14,000 farms and ranches in it. And frankly a district that is a big oil and gas producer. So, the price on metals, the tariff on steel and aluminum hurts us. And a big district in terms of the aeronautical industry as well. Again, very metal-sensitive.

So, we don't see much upside in this fight. But I will say, there's a lot of confidence in the president of the United States. He's asked for patience, and so far at least he's gotten it.

CAVUTO: There's always a timetable on patience, I guess, sir.

What do you think it is? A lot of your constituents have been dealing with this because their products trade on the open markets in real time.

What is the timeline on this? In terms of months? What are we talking about?

COLE: Yes. Well, we would hope to start seeing some results by this by later summer, certainly into the fall.

It's hard to predict timelines. The one thing I will say is that farmers and ranchers are awful used to volatility. That's the nature of the markets.

It would help a lot, frankly, if we could get the farm bill passed in Washington, D.C. It now has passed both the Senate and the House, so getting that conference in through, that's always seen as something that provides a safety net and some stability.

Again, you know, I don't know how you would estimate something. But right now, again, there's a lot of faith in the president. A lot of belief that he's right. We do hold a lot of chips and, frankly, particularly where China is concerned, a sense that they have been bad actors for a long time, that they have gamed the system to their advantage, that they have been really brutal when it comes to stealing intellectual property from this country.

CAVUTO: No, there's no doubt China is in a case a lot by itself, as we have discussed in the past, sir.

I'm just wondering, though, when we include the likes of the Canadians and the European Union, I would imagine their offense are less, yet we have lumped them all into the same big old pot. Does that worry you?

COLE: Yes, it does, because I think they could be allies in dealing with China.

Look, China is rapacious all around the world, not just to us. So, I think don't want to alienate allies. Now, we're in a position where we're renegotiating NAFTA now. That's a good thing, time to do that. And, frankly, from an agriculture standpoint, we would hope to see some gains there.

Where the Europeans are concerned, again, the president has got a legitimate point. We certainly see very protected agricultural markets in the European Union.

Again, there's some sympathy, but there's also a limit. Again, this is a very export-dependent industry. In Oklahoma, we export more than half of our winter wheat, for instance, huge exporters of soybeans. And that's been good for the economy. Again, we're a big foreign exchange earner for the United States.

COLE: So, you don't want to sacrifice your strong areas.

Very good having you, sir. Thank you very, very much.