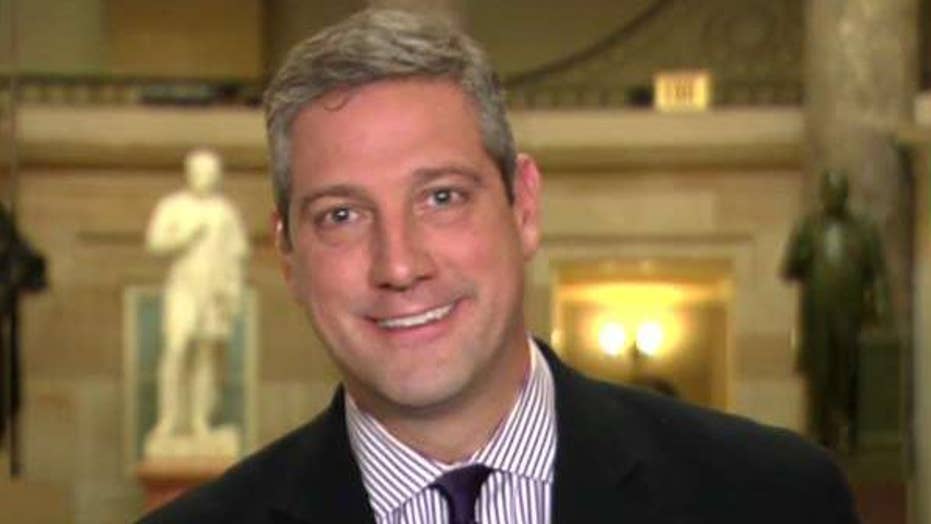 Rep. Tim Ryan: Not wise to borrow money to give tax cuts

Democratic congressman from Ohio voices his criticisms of the GOP tax reform plan.

REP. KEVIN BRADY, R-TEXAS: This is time well-spent. Our Democrats have good ideas in tax reform. They stayed at the table to talk to us. So, I think it's early for them. We're going to keep the door open and keep discussing with them.

But all I know is this. Look, this -- the growth we have had for 10 years, where we can't compete anymore around the world, where businesses aren't able to bring in -- back their dollars and reinvestment in America, it's got to stop.

CAVUTO: All right, House Ways and Means chairman Kevin Brady optimistic he can get Democratic support. We will see.

Ohio Democratic Congressman Tim Ryan, remember, was the one who challenged Nancy Pelosi, racked up quite a few votes in that challenge, joins us right now.

CAVUTO: Would you vote for this?

RYAN: We're just looking at it.

But, right now, Neil, I think borrowing $1.5 trillion is not a good way to entice a lot of us to be able to vote for this. We're borrowing money to give tax cuts that are primarily going to go to the wealthiest people in the country.

And we're probably going to have to borrow that money from China and other countries. And I just don't think that's wise. And I'm yet to find too much in here that is really going to drive up wages and drive investment and increase manufacturing in communities like mine.

So, it just came out today. We're going to look at it real closely. But, at first blush here, I don't think borrowing all this money is going to be a very good idea for our country.

CAVUTO: All right, now, I know you have tried to address spending in the past, so I'm not lumping you in with all your Democratic colleagues.

CAVUTO: But for a lot of people who hear a Democrat bemoaning piling up deficits and debt, they say, well, wait a minute, what has been going on the last eight, nine years, right?

RYAN: Well, I mean, we're coming out of a huge financial collapse...

But we have started to bend the curve on deficits a little bit. But if you want to go back, as we have periodically, and remember what happened in the '90s with a Democratic agenda on taxes, on budgets, we ended up with a $5.6 trillion surplus at the end of that term for President Clinton.

And I think we need to get back to those days where we pay for our expenditures, we don't borrow money, and we certainly don't borrow it to give huge tax cuts to people who have been doing pretty well.

CAVUTO: All right, but who are you talking about here, since let's say the richest are still going to be paying at that 39.6 percent rate?

RYAN: Well, I think getting rid of the Alternative Minimum Tax to make sure that, no matter how many loopholes you can jump through, that guys like Donald Trump and people like him are going to have to at least pay a minimum.

If you got rid of the Alternative Minimum Tax for Donald Trump, he would have gotten a $30 million tax break a few years back.

I don't think that's the way to go, Neil.

CAVUTO: Are you for the corporate tax cut?

RYAN: Well, I have got to look closer at it.

But it doesn't look like it closed any of the loopholes. My big issue with the corporate tax is, you have got about one-fifth of the Fortune 500 companies that didn't pay anything. Meanwhile, a lot of the other ones are paying that tax.

So, I think there's an unfairness within the corporate tax, not to mention that about 25 percent of the corporate tax is paid for by the workers. That's the Congressional Budget Office saying that.

So, they actually -- the worker actually pays some of that corporate tax, too, which I have concerns about.

We should be doing -- using money to have public-private partnerships with the telecommunications companies, with the power companies to take care of our public infrastructure, if we're going to be competitive in the 21st century.

I just don't see this tax policy as something that is really going to benefit the working-class family in Youngstown, Ohio.

CAVUTO: All right, but, obviously, you referred to the Clinton years, of course, when we did see surpluses. You're quite right about that.

He lowered a lot of investment-related taxes. He brought that top rate up to the rate it's still at now. So, you could make an argument that, you know, those friendly rates to business helped bring the kind of surpluses and economic activity you want to see, right?

RYAN: Well, I think it also led to the tech boom, and I'm not sure it led in the long term to distributed investments and wealth creation for working-class families over the long term, not to mention that that was a long time ago.

And we have seen a huge concentration of wealth. Since we did tax reform the last time, which was about 31 years ago, 96 percent of income growth went to the top 10 percent of families.

So, all of this new growth, almost all of it, went to the top 10 percent. And I think that's why you see the anxiety in Middle America.

So, if we don't plug these communities in...

CAVUTO: But you don't have to worry about them, because they're not part of this -- this tax party, right?

CAVUTO: They're not -- the rich are not part of this tax party.

RYAN: Well, no, what I'm saying is, that's where the benefits are going. A lot of the cuts...

CAVUTO: But not the benefits of this latest series of tax cuts that Republicans are pushing, right?

RYAN: No, they're getting a -- I think just getting rid of the Alternative Minimum Tax alone is a huge one.

RYAN: I think dropping the corporate rate in -- without any kind of closing of the loopholes...

Let me ask you, though, real -- while I have you here, when you challenged Nancy Pelosi, it raised a lot of eyebrows. You got a lot more votes than people you thought you would get.

A lot of people have been critical of her, saying she's getting a little long in the tooth. Maybe it's time for fresh young leadership.

CAVUTO: Do you want to challenge her again for the Democratic leadership in the House?

RYAN: You know, I'm not focused on that at this point. I'm focused...

CAVUTO: Are you thinking about it?

RYAN: You know, I haven't really given it much thought.

My main goal is try to get the Democratic Party back on track, talking about economics, getting wages up, pensions, back to an economic message which I think allows us to be competitive in every corner of the country. That's been my main goal. And I'm going to continue to do that and try to help...

CAVUTO: But you don't think she's too old for the job or whatever?

You know, the president is 70 years-plus.

RYAN: So, I don't think age has anything to do with it.

But I stated my piece in November, and I will continue to say, we have to talk about the economics.

RYAN: And I don't think that we can be a party that is hostile to business.

I do believe we need to make public investments.

RYAN: But, at the end of the day, the government is not going to hire everybody in Youngstown. We need small and midsize businesses, entrepreneurs to be growing and creating wealth in our communities.

RYAN: And that means you have to work with business to make that happen.

RYAN: Thanks, Neil. Always a pleasure.