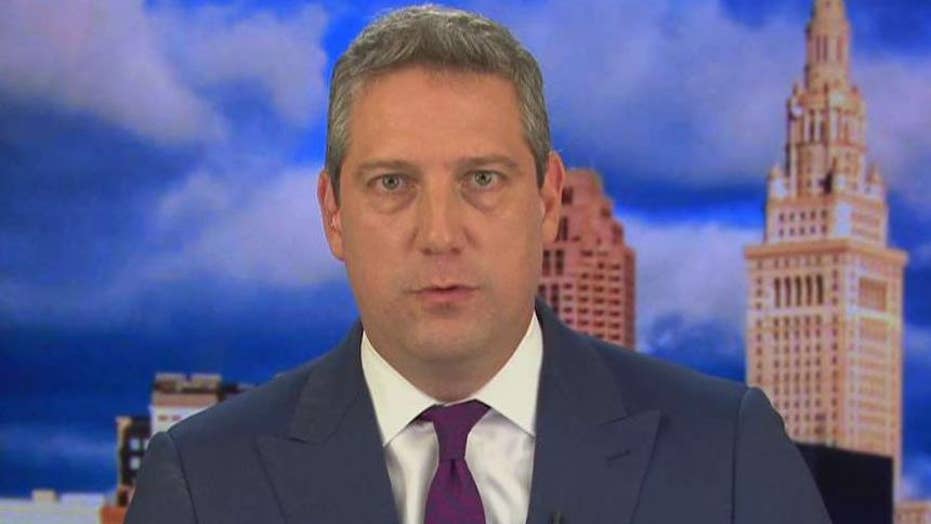 This is a rush transcript from "Your World," November 2, 2018. This copy may not be in its final form and may be updated.

He's closely scrutinized, of course, the Ohio congressman, House Appropriations Committee, serves there, also earlier had challenged Nancy Pelosi to lead the Democrats. He failed at that, but he won a lot of admirers in the process. He joins us right now.

CAVUTO: How does this shape up? Nancy Pelosi -- I mentioned her -- had said that she's very confident Democrats will retake the House. What do you think of that?

RYAN: I think there's a -- there's a pretty good shot we can.

I mean, the different -- the real issue is going to be the margins. All of these races seem to be -- like the ones you just showed in Florida, within two, three, four points either way. And so now it's really down to the ground game in each of these congressional districts and each of these states.

And at the end of the day, whoever gets their people out to vote are going to have wins. But I don't think they're going to be huge wins. And so our margin could be small or it could be decent.

Should her reward be then, if Democrats do take the House, make her the next speaker?

RYAN: I'm still of the school of thought that I was two years ago, because our -- is that we need new leadership.

And I will just say, I think the new members coming in need to be our priority. If we win 30 or 35 seats, or we have a pretty big margin, how do we protect those people who have come in? And most of those people have already said that they weren't going to vote for her.

And so to force them to place that kind of vote would, I think, put their seats immediately in jeopardy. And, also, we have got to rebuild the blue wall in the -- in the industrial Midwest, Pennsylvania, Ohio, Michigan, Wisconsin. So we’re going to need some leaders who can help us do that.

We need to start playing again in the South. We're going to need leaders who can go into congressional districts into the South and help us win some of these districts in North Carolina, South Carolina, in Georgia.

And so that's going to be the discussion we're going to start having after the election.

CAVUTO: Do you think she should lead Democrats?

RYAN: My position hasn't changed on that. It's the same idea.

Again, I mean, we need people who can go into these congressional districts. And we have got to get back to, yes, health care and the economic message. I mean, I know the report is that the job numbers are good.

But the reality is, inflation is still outpacing the wage increase. And so people are still feeling squeezed. I just ran into a woman at the grocery store in -- just outside of Youngstown, Ohio, and it's the same argument that’s been going on for 20 or 30 years.

And I think the president's getting a little out ahead of his skis here. Yes, you get the job numbers, but if people aren't feeling it, then it's going to be a political problem.

CAVUTO: Well, they're feeling it more than they have, right? I mean, the wage gains are the best they have been in almost a decade, right?

There are many in your party, Congressman, who have been advocating just nixing the tax cuts that were approved by Republicans, not a single Democratic vote. And some, like Kamala Harris, the senator from California who might be a presidential candidate, says take that money and give it to the poor, $500-a-month checks.

Corporate profits are at their best. They have been doing really well. They have seen -- about 96 percent of real income growth has gone to the top 10 percent of the people in the country. And we borrow a lot of that money from China -- let's be honest -- in order to pay for this.

CAVUTO: Would you take away the corporate tax cuts?

RYAN: Well, I think you could need -- I think we need corporate reform. And I think you need to make sure that these corporations are paying their fair share.

I think we still have one-fifth of corporations that don’t pay any corporate tax. So you still need that reform in place.

I would be more concerned with small businesses, start-ups, helping get some investment in the communities like Youngstown from venture capitalists.

But if you can -- if you can keep the middle-class tax cuts in place, keep them in place for small businesses, we still need growth. The number one job creators is still start-ups. And in Youngstown and Akron, Ohio, and these comeback cities in the Midwest, we need private investment.

So it's not that the private sector is bad, but we also need broadband, roads, bridges. We need work force development training. We need more into -- involved in the health care, especially preventative health care. And we need to take down dilapidated homes and buildings to really clean up our cities.

And you were among those, maybe because of where you're from in Ohio, who had warned the Hillary Clinton folks, if memory serves me right, not to ignore your neck of the woods and the Midwest in general. They did. In retrospect, that proved fatal.

The president seems to be preferring to go back to these very same areas, West Virginia notwithstanding. And do you think Democrats risk screwing up again?

And that's got to be what we evaluate after this election. Joe Biden is one of those people who can go anywhere. And he was just in Youngstown a couple of days ago. I know he's been in West Virginia. He goes to North Dakota.

But we need more than just Joe Biden. We need someone in our current leadership that can go to these places and really communicate to these workers, because I think we have got a great argument to make on health care, on bringing technology and entrepreneurship into these communities, on pensions, I mean, really have an honest conversation with how many people are losing their pensions or squeezed in their retirement because they’re losing their pensions, but worked for 30 or 40 years.

That's not fair. Our government should be working to do that. That’s another thing. If we repeal that 83 percent of the tax cut, I think we could get people made whole on a lot of the pensions that they -- that they have lost.

CAVUTO: But capitalism wouldn’t be checks handed out to the poor, $6,000 a year, would it?

RYAN: Well, the ideal would be, how do you get private investment in the communities to lift everybody up? I mean, the goal is to get everybody working. Every able-bodied person should be working.

CAVUTO: Congressman, thank you for taking the time.

RYAN: Neil, always good to be with you.