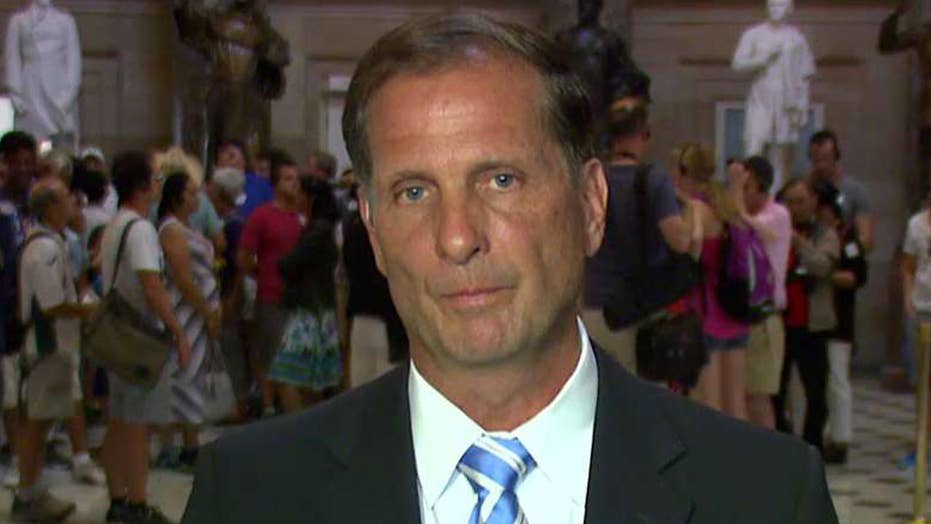 Rep. Stewart: I'm not really worried about the GOP agenda

Congressman says he supports the president and his goals

REP. PAUL RYAN, R-WIS., SPEAKER OF THE HOUSE: We have an obligation to carry out our oversight regardless of which party is in the White House.

And that means before, rushing to judgments, we get all the pertinent information.

SEN. MARCO RUBIO, R-FLORIDA: Before we form opinions and advocate for action, we need to know what the facts are.

UNIDENTIFIED MALE: At this point, we need to see the facts, and laid out. All we're dealing on right now is media reports.

UNIDENTIFIED MALE: Facts. We need facts, not -- not speculation.

RYAN: And there's clearly a lot of politics being played. Our job is to get the facts and to be sober about doing that.

So where is all of this going? House drama spilling over to Capitol Hill, Wall Street, you name it.

Congressman, good to have you here.

Are you worried about that agenda?

I mean, we have known this was going to be difficult. We knew there would be opposition. Most of us just kind of keep our heads down and we take the next step and we keep working on the things that we can work on, the things we can control.

Are things more difficult now than they would have been? No doubt about it, Neil. I think you can see that. But I think most of us, again, are just focused on doing what we promised the American people that we would do.

CAVUTO: How much do you blame maybe the management style of Donald Trump for a lot of this?

STEWART: Well, it's hard for me to say how much, because I -- what would I say, a percentage or whatever?

I think there's two things at play here. One of them is a president who speaks fairly extemporaneously, who kind of says what is on his mind. He sometimes says things in the heat of the moment or with emotion.

And the second thing is, you have got a press who I think, just frankly, has lost their minds in some ways. And they're like puppy dogs out there chasing rabbits, I mean, this thing and that thing and this thing.

And every one of them are a crisis to some of these folks. And you put those two together, and it leads to what we see now. And that's a very chaotic, very emotional and just, frankly, over-the-top rhetoric sometimes.

CAVUTO: Do you think the White House needs a senior staff shakeup? That's been -- that's out there.

STEWART: Yes. Are you asking, would I support that? Do I think it's necessary?

STEWART: You know, I don't know.

You know, very, very clearly, we would like things to be more smooth and to have a more consistent message, a more controlled message out of the White House. But, once again, I think that this president has faced such fierce opposition in nearly everything he does.

And let me tell you an example. And it's one that I think you probably want to talk about. Look, I like Director Comey. And I have defended him for a couple years now to my Republican friends and to my Democrat colleagues who have been saying for a couple years, at least since the Hillary Clinton e-mail thing, hey, he should go. He should be -- he should resign or he should be fired.

And now, suddenly, those same folks are defending him. And I think that's just one example of how the politics of this thing can turn on a dime. And, again, there's just fierce opposition to everything this president tries to do.

CAVUTO: Do you think that if tax cuts, the health fix is delayed beyond this year, Congressman, stick a fork in both, they're not happening?

STEWART: No, I don't think stick a fork in it, but you can probably get the fork out of the drawer.

It will be much more difficult if we don't do it this year. I mean, that's one of the reasons we were so adamant and I felt so strongly about, you have to do repeal and replace of Obamacare. That was the foundation on which really all of our legislative calendar rests, and a number of reasons for that.

But now we have done that. It gives us a little confidence, a little momentum. Tax reform is actually harder. We know that.

STEWART: I don't think it's going to be done by July or August. But I do think it has to be done this year.

CAVUTO: All right, sir, thank you very much. I know it's been a crazy time down there, Chris Stewart of the House Intelligence Committee.