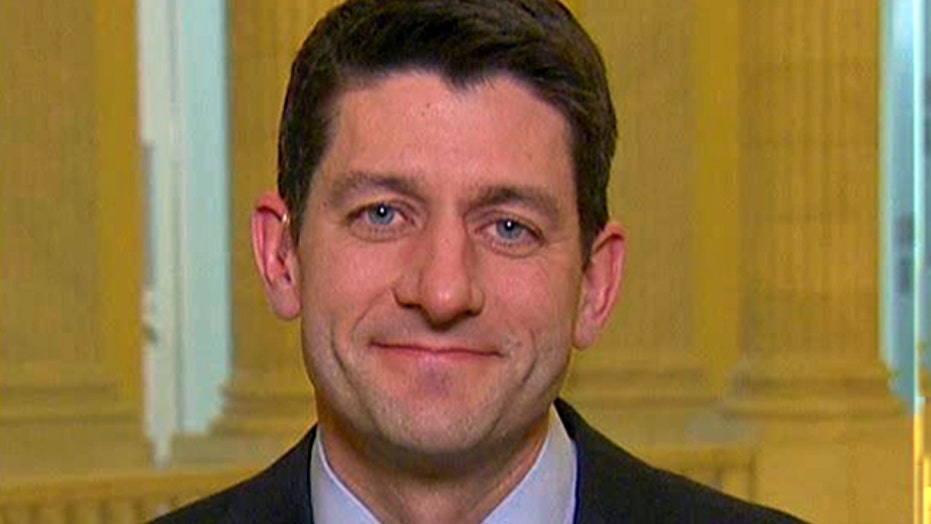 Rep. Ryan: Obama's budget has gone 'farther to the left'

This is a rush transcript from "The Kelly File," March 4, 2014. This copy may not be in its final form and may be updated.

PRESIDENT BARACK OBAMA: Governor Romney, I'm glad you recognize that Al Qaeda is a threat. Because a few months ago, when you were asked what's the biggest geopolitical threat facing America, you said Russia. Not Al Qaeda, you said Russia. In the 1980s or now, calling to ask for their foreign policy back because, you know, the Cold War's been over for 20 years.

MARTHA MACCALLUM, GUEST HOST: So there, take that, right? That was President Obama and Governor Mitt Romney in the third debate of the 2012 presidential campaign, interesting to look back at that now, right?

President Obama mocking the governor for calling Russia America's greatest "geopolitical adversary." The president got a laugh from that one that night. And many in the media were quick to ridicule and point it out and talk about how funny and clever the whole thing was.

But as Russian President Putin now shows no sign of loosening his grip in Ukraine, and perhaps we're -- you know at the point where we're starting to concede that they've taken over Crimea at this point. Commentators across the political spectrum are concluding that actually Governor Romney was right that night. Republican Wisconsin congressman, who was the vice presidential candidate, of course. He joins us now this evening with his thoughts on this. What's your reaction when you look back at that, congressman?

REP. PAUL RYAN, HOUSE BUDGET COMMITEE CHAIRMAN: You know there are moments Martha when I just look down, shake my head, and say I can't believe we lost to these guys. This is one of those moments.

Mitt was right. I think the president was incredibly naive on his Russia policy. His reset has been total failure. I think this is what happens when a superpower projects weakness in its foreign and defense policy. Aggression fills that vacuum. And I think that's what happening right now.

MACCALLUM: Do you think the president wants to be a superpower? Do you think he want to lead in this situation?

RYAN: I don't know the answer to that question. I don't think he likes us being the superpower as we have traditionally seen ourselves. I believe he's taken on the whole notion of exceptionalism. I believe we are an exceptional country for lots of reasons. And I'm not sure that he's gonna be leading like he ought to be in this situation.

Look, Russia's violated the sovereignty of Ukraine. I think there are a lot of things we need to be doing to address this, LNG exports, other -- other kinds of sanctions. But I think the lack of a coherent foreign policy, the fact that the president is proposing a budget to hollow our defenses projects weakness, and weakness a force of vacuum which is filled by aggression, and I think that's what's happening.

MACCALLUM: All right. A lot -- lot more to be said on that. But I want to get your thoughts on the budget. Because the president put out his budget today, it's a $3.9 trillion budget plan. What do you think about it?

RYAN: It's more of the same. I mean, look I wish there was something positive to say, I really don't. I think he's going further to the left. This is a budget where the president basically raised the white flag and has surrendered his administration for the next three years, that he's not going to do anything to address our fiscal challenges.

I mean, last year he actually put a couple ideas in the budget to try and deal with our entitlements and our debts. This year, none of it, actually just more spending more borrowing, $1.8 trillion in new tax increases, in addition to the 1.7 trillion he already put out there, over $8 trillion in more debt. His budget proposal to bring our debt up to $25 trillion. It's gone further to the left. So, this isn't even an attempt to work with Congress.

MACCALLUM: You called it a campaign document this budget.

MACCALLUM: What do you mean by that?

RYAN: I think it's a campaign document for its liberal base. I think he's not trying to bridge the differences between Congress, I think he's trying to give his base the kind of tax increases, spending increases and borrowing increases that he believes in. So I think he believes in this budget, but I don't think it's in the mainstream, and it's clearly not doing anything about our fiscal problems. It proposes that we never ever balance the project. And I just don't think American taxpayers deserve that. I don't think that's what they're looking for in a president.

MACCALLUM: There's so much frustration, we see it on Twitter all the time. People send us notes all the time about how concerned they are, about the debt in this country. And then you know you read further, the Senate is not going to vote on this budget. You know, people are so frustrated with Congress, the lowest approval numbers out there are for folks on the Hill. You know, I think people just throw up their hands and say, what difference does it make? Why should we care that the budget came out?

RYAN: Well, it is one of those on dead on arrival budgets. We have passed three budgets in a row here in the House that actually balance the budget and pay off the debt. We've shown the country here specifically how we will balance the budget, how we'll pay off the debt. We're putting ideas out there, how to grow the economy, how to create jobs, how to open up energy infrastructure, how to keep the defense from being hollowed out.

MACCALLUM: Let's talk about what you're going to bring forward in March. And you're looking back at 50 years since the war on poverty came into existence under Lyndon Johnson. All these programs that were designed to eradicate poverty in this country. You know, Johnson spoke very forcefully about how important it was that we shouldn't have poverty in the United states of America, and yet the numbers are still pretty much the same after all those years.

We have the highest poverty rate in a generation, 46 million people living in poverty. And a lot of these programs are so redundant and duplicative and ineffective. We need to have a debate in this country about how better to fight poverty. How better to -- to approach this. What I think what our approach has been is, form a new programs after new program,s don't see if they're working, and just throw money at it, and measure how poverty fighting as how much money we're spending on this program versus of how many people is getting out of poverty.

And that's -- that's what we need to do, is have a good debate about attacking root causes of poverty, so we to get people out of poverty once and for all. That's not the kind of debate we've been having.

MACCALLUM: Congressman, thank you very much. Good to talk to you tonight.

RYAN: You, too, Martha, thanks.