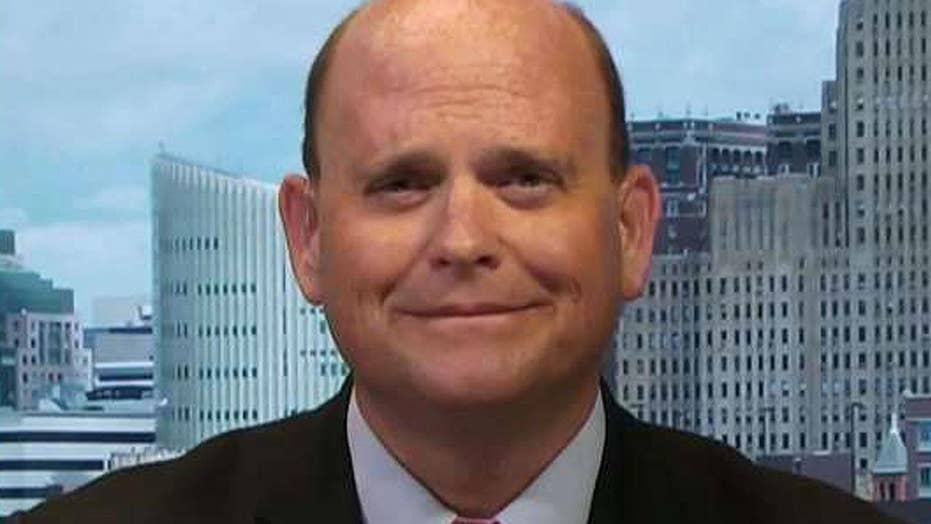 Rep. Reed: Reasonable to say tax reform will be after August

Congressman talks about the timeframe for tax cuts

This is a rush transcript from "Your World," April 19, 2017. This copy may not be in its final form and may be updated.

NEIL CAVUTO, HOST: I do want to pay attention to what happened at the corner of Wall and Broad. I talked about a sell-off. I talked a lot inspired by comments by Speaker Paul Ryan, ironically, in London. I'm going to get to those comments in a second.

But they cut to this, that he is optimistic they can get tax reform, tax cuts done, but the timetable might be kind of loosey-goosey, I mean, so loosey, so goosey, we're now into the fall potentially.

To Republican Congressman Tom Reed is a member of the House Ways and Means Committee, very integral in coming up with this whole thing.

In fact, they're the only guys that seem to coming up with anything regarding tax cuts.

So, Congressman, good to have you, sir.

CAVUTO: All right, well, give them my love back at them. I think we need a prayer here for this to happen. That's how I roll here. I just think right off the top of my head, Congressman.

Now, I'm looking at this. And it doesn't look too good as far as getting this out there. I spoke to Chairman Kevin Brady on this issue. He's optimistic that they can get a blueprint going in committee hearings on that and move forward.

Are you? I mean, what does the timetable look like for you?

The code is so broken, that we're going to move forward with it. The House is leading on the issue. We're looking to do some hearings here in the very upcoming future. And we're going to keep pushing forward. And my goal is to get it done sooner, rather than later.

Does that mean the rest of 2017? We're going to do it right. So, whatever that time frame is, we're going to keep pushing forward.

CAVUTO: All right, you always sound like my dad when we were taking long road trips, Congressman. He would say, Neil, we will be there soon. Well, how soon? Soon.

All right, so is soon not August? Is it after August?

REED: I believe it's reasonable to say it's after August. But we're going to have the debate.

And that's the way it should be. It should an open, honest debate across America, to try to limit as many unintended consequences as possible, and have this in an open and honest way and engage as many folks as possible.

When I spoke to Kevin Brady yesterday, he seemed to indicate when I raised administration views on a border tax, a tax on imports, that sort of thing, I said, well, not everyone in the administration is keen on that. And he mentioned something I thought was a very interesting comment, when he said, well, that depends who you talk to.

Are you getting different vibes out of the White House and, for example, even out of the Senate? It sounds like a lot of ideas are being thrown out there. But, for example, on the import tax, you're not all in agreement on that.

REED: Well, I do believe there's going to be a very vigorous debate. It's tax reform. It doesn't happen every day. It happened decades ago.

And this is another an opportunity to get it right. So, you're going to have that debate. And I think that's a positive development. But until you actually get stuff in concrete, we're going to lead in the House of Representatives on the Ways and Means Committee and we're going to put our ideas out there against anyone's. And the only ones that have been floating around so far are ours. And that's why we're going to keep pushing.

CAVUTO: And that's what worries me, Congressman.

I don't mean to badger the other guys or make a blanket indictment of Republicans. And I know this isn't easy. If it were, it wouldn't be generational that we have it, and '86 was the last time.

But the frustration seems to be that time is slipping away, and that he the later it goes in the year, the less likely certainly taxes -- the tax cuts would be retroactive. Is that your feeling, that whatever you guys come up with later in the year, it won't be retroactive?

REED: Well, I think we can deal with that, as we have to deal with a transition package, and going to this next generation, this competitive code, this fair code, this simple code that we envision for America going forward.

We can deal with the timing. We can deal with the effective dates. The bottom line is to get the policy right. And right now, the best policy being put forward is what we're doing on the committee. And until there's a different idea, we will keep pushing.

CAVUTO: What you're doing has nothing to do with what's happening on the health care front and giving another rework for that.

Is that a problem for you? Because everybody seems to be saying you have got to do the health care thing. And that didn't work out so well last time. Are you convinced that this time it will and that greases the skids for what you want to do on tax cuts?

REED: I do, because talking to the administration, I know the administration -- this is their top priority. Obviously, we had a setback with health care, but health care is not going away. We can walk and chew game at the same time. And I'm very optimistic we're going to keep pushing forward.

I'm not so convinced that that dexterity is there. And I blame a lot of folks for that. But because you're not all on the same page, and now people are talking about paying for tax cuts, and you have a number of supply-siders, led by Art Laffer and others, saying, hey, you don't have to pay for these.

On that alone, there's widespread differences of opinion. Do you believe you have to pay for a tax cut that it has to be revenue-neutral?

REED: I believe it should be a goal. You have the dynamic effects. And I think now that we have those type of scoring mechanisms, we shouldn't be beholden to bean counters out of D.C. to get the policy right.

CAVUTO: All right, so you're not beholden to paying for tax cuts, that the idea that there might be short-term deficits, but you will get a lot of revenue down the road?

Growth is a key component of what we're shooting for. And the bottom line is, get it right for the American people.