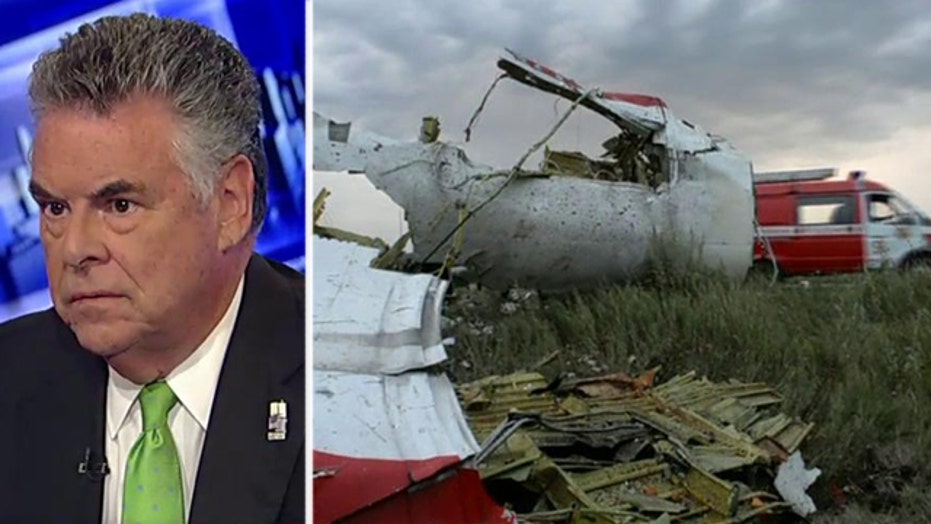 Congressman reacts to jetliner shot down over Ukraine

This is a rush transcript from "The Kelly File," July 17, 2014. This copy may not be in its final form and may be updated.

KELLY: Do you believe that that they still do not have the manifest of this flight?

KING: No, I would believe we have to have that.

KELLY: We, meaning we the Americans. We have that, don't we?

KING: Yes, generally again, I'm not certain, but we do and probably the reason they're not acknowledging Americans -- they're going to wait until next of kin is notified. That's usually the way it's done.

KELLY: OK. So, but not even to confirm the number of Americans or that there were Americans on board?

KING: Yes. I don't know why they wouldn't. To me, anytime you raise a mystery about something like this, it just create conspiracy theories we don't need. This is bad enough without creating extra confusion.

KELLY: Do you have knowledge of this?

KELLY: Is this something that you will be briefed on?

KELLY: And right now what we're hearing is that most people believe that this is, you know, this faction of Ukraine who is pro-Russian, basically. They call them separatists, but they're pro-Russian. And the big question is whether Russia actually had its hands in it or not. Do you believe that matters?

KING: No. It matters certainly if Russia was directly involved, it matters. But even just the fact that they supplied the weaponry, they have to take responsibility. And I think it's important for the president to show leadership here. If any Russian involvement at all and certainly appears if there were, I think we should deny Russian planes' landing rights in the U.S.

KING: And get European allies the same. Why should air flap be allowed to land in our airports after something like this until Russia admits what happened, until they make full compensation, until they make sure it doesn't happen again.

KELLY: If Russia had its hands on this, even indirectly, do you believe it was an act of war?

KING: I would say -- well, if it's indirect, maybe not an act of war, but certainly an act of criminal negligence. And Russia would have to bear responsibility.

KING: Yes. I would put it in the category of criminal negligence.

But again as a major world power, Russia cannot be guilty of that type of criminal negligence. They have to pay a price for that. This isn't some third world banana republic we're talking about. We're talking about Russia, we're talking about Putin. And he has to take responsibility and has to be held accountable. And we should, I believe should start with embargoes, we should start doing whatever we can do economically and get a western allies to show some guts and go along with this, and we have to become energy independent.

KELLY: We don't want to do it because it's going to hurt us financially, correct? I mean, if we put tensions on Russia, we have it downside economically.

KING: Yes, in the long run we have to do it. It's as simple as that. I mean, there's always going to be some pain. Yes, no pain, no gain. So I believe, again, the president has to show leadership.

KELLY: What should he be doing? I mean, if the early reports turn out to be true and there were 20-plus Americans on board this plane that were just murdered by guys who received some very dangerous equipment from Putin, what should our president do?

KING: Well, first of all he shouldn't be at fundraisers tonight. That's absolutely disgraceful for the president of the United States at a time like this to be --

KELLY: What is he thinking, Congressman? Why is he doing that?

KELLY: It cannot be that he doesn't care. So, what could it be?

KING: Something almost like an emotional barrier he has. Again, Benghazi, out to Las Vegas to raise money after the Americans are killed in Benghazi. It's a failure of leadership. And it's really, again, any president can make a mistake, but this is a pattern. It's a long-established pattern in times of crisis that he seems to just zone out.

KELLY: Last question, do you think that we're going to know who did this one way or the other even if they're running away with the evidence in Moscow?

KING: -- will show us exactly where the missile came from and the forensics will show the material and what country it originated in.

KELLY: I hope you're right. Congressman Pete King, good to see you tonight.