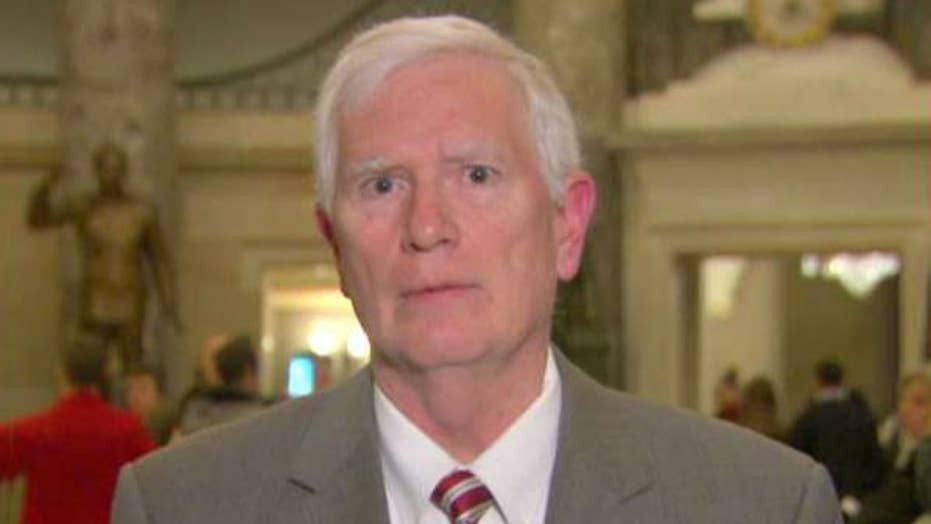 Alabama congressman speaks out about the level of spending proposed in Senate legislation.

NEIL CAVUTO, "YOUR WORLD" HOST: And, again, I want to emphasize that this is a pox on both houses, on both parties. This is not just about Democrats wanting DACA. This is about both parties abusing dollars and cents equally, equally, not one over the other.

Both are cheating on something they agreed to a little more than seven years ago. And they're recklessly avoiding it.

And that is why -- that is why interest rates backed up today and that's why a big jump in the Dow turned around today, on the belief that these guys have created a problem.

And this next guy agrees. He's a hell no on this budget deal, doesn't like what his own party has done, certainly doesn't like what Democrats have done, and doesn't like the fact that we forgot about something called fiscal resolve or anything approaching it.

It is a debt junkie's wildest dream with all the spending of money that we don't have, we have to borrow to get and can't afford to pay back. And you can see that already reflected in the credit markets, where we're going to embark on an unending stream of trillion-dollar or more annual deficits.

That's money taken outs of the credit markets, money that is no longer there, that drives up interest rates. It's unfathomable to me that we want to bankrupt a country that it took centuries of our ancestors to build.

But this legislation goes a long ways toward bringing about an American -- an American debilitating insolvency and bankruptcy. And I'm shocked at how bad and financially irresponsible this piece of legislation is.

There doesn't appear to be any resolve to even slow the growth of spending down. And I did talk about what was going on with things like the 10-year note and all that was backing up today, I believe in large part due to the government essentially shrugging its shoulders at this.

BROOKS: The economics are simple.

If Fox were to borrow about 25 percent of its operational costs each and every year, before long, Neil, you would be out of a job.

BROOKS: Because Fox would be out of business. Same thing with family.
The economics are the same thing for our country. People need to start looking at what is going on in Venezuela to see how bad it is when a central government goes into insolvency and bankruptcy.

Recently, 800 percent, 800 percent inflation rate in Venezuela. Is that where we want to take the United States of America with an insolvency of our central government?

Recently, over a 12-month period of time, 75 percent of the Venezuelan population suffered an average weight loss of 19 pounds, because they can't get the food, the calories to sustain their body weight. Nurses and teachers are going across the border into Colombia setting up houses of prostitution, earning money that way, than buying food in Colombia and hiring mules to carry the food back to their kids in Venezuela so they don't starve.

Is where we want to take the United States of America? Again, this idea that we have unlimited amounts of money that we can borrow, it's a fiction, it's dangerous, and it needs to stop here.

CAVUTO: Well, you're right about that, Congressman. I don't you have to be a Democrat or Republican to see that.

Thank you, sir. Very good having you.