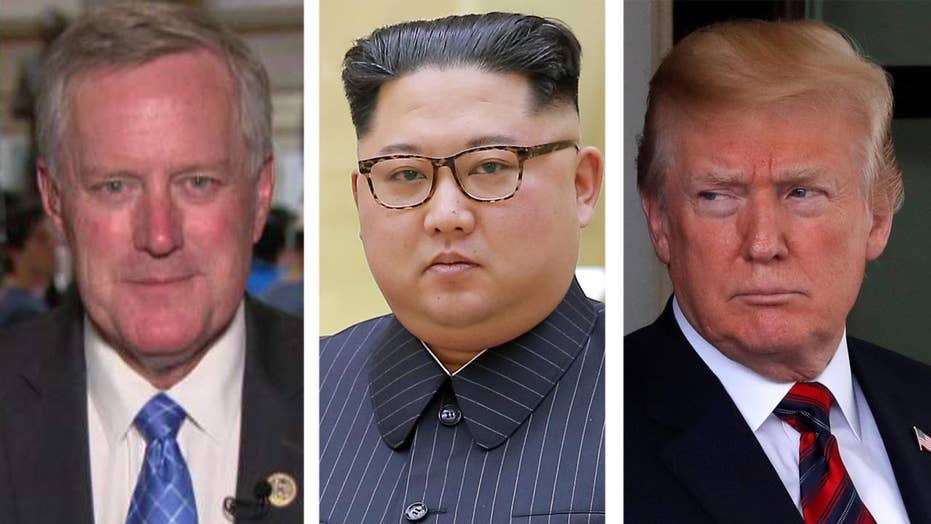 Rep. Meadows on President Trump pulling out of NoKo summit

This is a rush transcript from "Your World," May 24, 2018. This copy may not be in its final form and may be updated.

Apparently, we're going to get tougher when it comes to the North Koreans. Already having slapped the hardest sanctions on any country in the history of, well, all countries, the president is considering still more actions, more punitive actions.

Let's get the read with Mark Meadows, the man who runs the House Freedom Caucus, among many things.

REP. MARK MEADOWS, R-NORTH CAROLINA: Neil, it's always great to be back with you and your viewers.

So, it's certainly good to be here today, even though the news obviously is not the best as it relates to North Korea, but look forward to answering your questions.

MEADOWS: Well, I think what we're going to see is not only a ratcheting up on the sanction regime, but really all their allies.

Here's the thing, is the North Koreans had an opportunity to become part of the international community and negotiate. They have made it clear that they don't want to do that. So, now that the talks are off, I think that they will become more and more isolated, if that is indeed possible.

But certainly the mood here on Capitol Hill is to be as punitive as we possibly can with the sanctions, and let them know that a nuclear peninsula of -- on the Korean Peninsula will not be tolerated.

CAVUTO: You know, I'm just wondering if this just might be an elaborate game of subterfuge here...

CAVUTO: Where the North Koreans eventually -- because we haven't heard from them -- come back to the table, realizing they might have gone too far.

But what if it's the opposite, Chairman? What if they -- they up the ante and then this all passes?

MEADOWS: Well, they may up the ante. I certainly hope not.

And I hope, you like, that your first hypothesis is right, that everybody that perhaps they're overreaching just a little bit, and just because there was a historic step across one line between North and South Korea doesn't mean that it will necessarily produce results.

I'm still hopeful that it can. And yet, today, it looks pretty bleak. But-- but even if it gets ratcheted up, I have -- I have great confidence in not only are the strength of our military and our military might, but the other tools that we have at our disposal to make sure that we keep Americans safe.

And I know the president is committed to that.

CAVUTO: Sometimes, politics being what it is, Congressman, the left, many on the left said the president blew it here, that the North Koreans came out on top. You heard about Nancy Pelosi was arguing about this.

But if you're the North Korean leader, and you're looking to see if the United States is going to potentially risk damaging a relationship with their big mentor, and that is China, how would you feel?

MEADOWS: Well, I'll tell you, if I was North Korea, I can give them a real message.

Having spoken to the president a number of times, and knowing him, he's serious about making a deal, but he's also serious about the punitive measures. And he will not blink.

You can't have it both ways. I can tell you, this president and Secretary Pompeo know how to negotiate. And yet, at the same time, China is going to have to determine who they're going to deal with.

I believe, in the end, they know that it's better to align with the United States than the North Korean dictator.

CAVUTO: In your gut, what do you think unraveled this?

MEADOWS: You know, in my gut, I think what happens is, is, in any negotiation, when you get close to actually making a deal, people get overconfident on their ability and what they think the other side may or may not want and the motivations.

I think they're underestimating the president's resolve. But at the -- the end of the day, I'm hopeful that maybe the event doesn't happen on June the 12th or around that, but that it does happen in the coming weeks, and that we find that the North Korean people will benefit from really coming into the 21st century and understanding that economics are really the driving force for most people's support, or lack thereof.

CAVUTO: Mark Meadows, good catching up with you. Thank you, sir, the House Freedom Caucus chairman, in Washington, D.C.

MEADOWS: Same to you. Thank you, Neil.