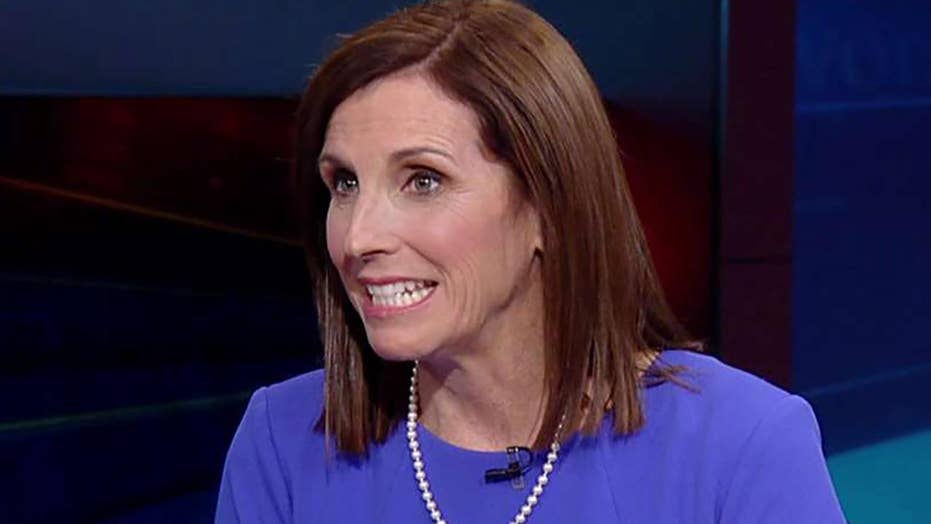 Rep. McSally: We have a historic diplomatic opening in NoKo

This is a rush transcript from "Your World," May 15, 2018. This copy may not be in its final form and may be updated.

NEIL CAVUTO, HOST: So, could it be as simple as a case of cold feet, and maybe the North Koreans getting a little nervous about giving away so much so early, or the global perception that they are?

Who better than to get a read of this than a woman who has visited the country, will be visiting the country again?

Congresswoman, good to have you on.

REP. MARTHA MCSALLY, R—ARIZONA: Good to be on, Neil. Thanks.

MCSALLY: Well, look, it's hard to tell. Could be just some posturing and trying to show strength coming up to the summit.

But we have also seen in the past, 1992 and 2000 and 2007, where they had a lot of nice words about moving towards more of a peace, and then it really ended up being nothing and they backtracked to their normal oppressive, belligerent regime.

CAVUTO: So, they lie. They have a history of lying.

MCSALLY: They have a history of lying. Right?

And, so in this case, you talk about trust, but verify. It's distrust and deeply verify. And we have a diplomatic opening that is historic, certainly, haven't seen in 65 years, thanks to the maximum pressure campaign by the Trump administration.

CAVUTO: But if Kim Jong Un is saying that I have no interest in meeting with my South Korean counterpart, I mean, do we still go to our wedding?

MCSALLY: Well, I think there is still a lot of diplomatic efforts going on behind the scenes in order to prepare for this. So let`s see how the next days unfold.

They have an ongoing exercise that's going to continue until the end of the month. They have an air force exercise with the --

CAVUTO: You mean our joint military exercises with the South Koreans?

CAVUTO: By the way, is there anything that we have been doing different delay that would have prompted this response?

MCSALLY: No. We, in fact, delayed the initial exercise until after the Olympics, you know, in a goodwill -- but they knew it was coming.

CAVUTO: Did we tell them it was coming?

MCSALLY: I'm sure they know, yes.

CAVUTO: Something to me, congresswoman, seems to have either been miscommunicated or that they didn't see coming, or, to your earlier point, maybe just doing what they have done so often in the past.

The Air Force exercises started yesterday. And they go until the 25th. And so that's a little bit of a shift of a new exercise that started.

CAVUTO: So, we haven't been any more provocative in any way?

MCSALLY: No, not at all.

I mean, these exercises are yearly. They're just based on our working with our Korean counterparts to make sure that we are ready to go, we have got interoperability, command-and-control. This is what we do all the time.

And we shouldn't stop them. Look, if they are trying to get to us stop these exercises, when they haven't changed one thing, that would be dangerous. I would not advise that.

CAVUTO: So, you wouldn't advise that we change -- not stop the exercises, but either, I don't know, don't make them as dramatic? I don't know.

MCSALLY: Stay the course now. Keep up the maximum pressure campaign. We have a diplomatic opening for sure.

But the vice grips need to keep being very strong until they actually change their behavior, that they would allow a full denuclearization of the peninsula that is verifiable.

CAVUTO: But wasn`t the subject of what the meeting on June 12 was going to be about, changing behavior then?

MCSALLY: Yes, but Secretary Pompeo has been over there a couple times now and they`re doing a lot of groundwork behind the scenes in order to prepare for that meeting on June 12.

So, again, this is -- there`s a long time between now and June 12. And a lot of things can happen diplomatically. And the administration needs to make the decision. We always had to be ready to walk away.

MCSALLY: President Trump has said that many times. This is a historic opportunity.

CAVUTO: But we didn`t think walk away ahead of the meeting, right?

So, maybe it's all settled, but do you think the Chinese are playing any role here, or there's pressure in North Korea that Kim Jong Un has given the impression or given the store away before even sitting down?

MCSALLY: I think he certainly needs to continue to show strength. He's got his own internal politics and his own regime dynamics going on. It's hard to tell.

CAVUTO: -- any resistance, congresswoman, to the overtures he's made, now, he doesn't make them, I know, in a vacuum?

CAVUTO: But that the perception is that, boy, between the release of the hostages, between the denuclearization commitment --

MCSALLY: And, again, that doesn't surprise me. I'm not saying -- I can't tell you about classified information I have about what they're actually talking about internally.

So, he is trying to, I think, show up to the negotiations potentially with greater strength, instead of weakness. We are certainly in a position of strength.

CAVUTO: But your trip is still one? Nothing has been canceled?

MCSALLY: I`m still heading over there.

CAVUTO: Is there going to be someone to meet you on the other side or --

CAVUTO: All right. But if they're worried that all of the sudden the North doesn't want to meet with them, would your meeting be pointless?

MCSALLY: I think it's really important for me to get on the ground with this delegation, talk to the troops, talk to the embassy, see what's actually happening real time and get a real sense firsthand.

CAVUTO: Well, have they talked to you, congresswoman, to say, we don't know what's up?

MCSALLY: We have been talking about our plans for our trip, but we will see when we get on the ground.

CAVUTO: The president, of course, has been making very clear in the State Department, we're still going, we don't see anything changing.

We need to see what happens in the days ahead. And I think it's right to continue to plan towards June 12. But we always have to be willing to walk away. And the president has been very clear about that. We are not giving away the farm.

We have very clear objectives of making sure that no American city is going to be held hostage with a nuclear weapon by North Korea. We will use all elements of national power in order to stop that from happening, economic, diplomatic, and military if necessary.

And he needs to change his behavior. He's got an opportunity. Let's see what path he chooses to take.

CAVUTO: While I have got you here, we have a bulletin coming in that the European Union is looking at efforts to salvage the Iran deal following our withdrawal.

In other words, they have not joined us.

CAVUTO: That is England, France, Germany. Doesn't say anything about Russia and China. On our backing away from that.

But they are trying to salvage it.

MCSALLY: I don't know what that means. It's a crappy deal. We have said that all along. They have had 16 months in order to address these very real shortfalls of the sunset clause in seven years

And so all of these things are causing Iran to continue to -- whether it's in Yemen or Syria or attacking Israel -- this is all because of an influx of cash that the Obama administration allowed for them.

And they are going to have some tough decisions going forward. And I hope they choose correctly to stand with us.

MCSALLY: Thanks a lot.