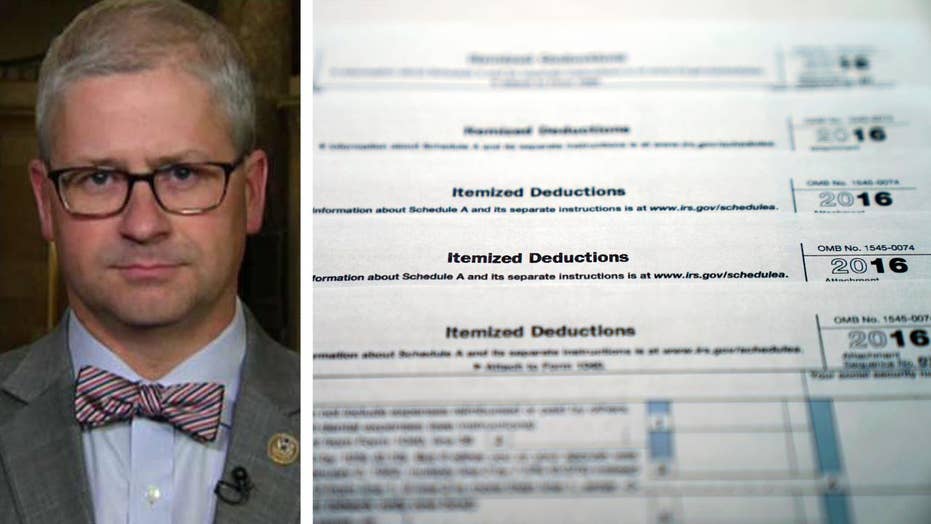 This is a rush transcript from "Your World," November 8, 2017. This copy may not be in its final form and may be updated.

NEIL CAVUTO, "YOUR WORLD" HOST: But in the meantime, the Senate now is set to release its tax plan, just as the House is wrapping up its tax bill, or marking it up, as they say.

But there are big differences here between the two measures, in fact, big enough that some say they could complicate the approval process and maybe even getting this whole thing done.

CAVUTO: The early differences are that the Senate wants to sort of stagger or delay the corporate tax cut. Is that a nonstarter to you?

So, this is a negotiation not just here between the House and the Senate, but also with the White House, and the president has a really important voice in this, obviously, because we wouldn't be in the game for tax reform if he did not win that election a year ago.

So, everything is in play at this point, obviously. But we want an immediate rate reduction and we want permanence.

CAVUTO: Now, they're also trying to deal with some provisos in your measure, in the House measure that have proven very unpopular, the ability to write off medical expenses and all of that. Are you open to any of takes stuff as well?

MCHENRY: Look, I -- look, everything that we do, every decision we make impacts our ability to have broad rate reduction. So we have made the tough choices in the House to dramatically simplify the individual code, the corporate code, and the individual pass-through small business code.

And so I think we made the right choices in the House. Not perfect, obviously. A lot of give-and-take to conform with Senate rules. And so we're cramming as much tax relief as we can to middle-class families and to businesses as possible and still conform with the Senate rules.

When you talk about the medical expense question, it's utilized by a very small percentage of largely wealthy people. It does not have that broad- base impact on families that we think is necessary for it to meet the desired consequences.

CAVUTO: So, what is your sense of the timetable here? Maybe these, to your point, the differences are all ironed out.

But I believe the goal was to get this done in the House by Thanksgiving, to get it done in the Senate, wrapped up and signed by the president by Christmas. Doable?

MCHENRY: Yes. It has to be doable, because we want to have immediate tax relief for middle-class families.

The complaint I hear loudly from my constituents at home and what we saw in elections in Virginia yesterday is Republicans want results. And they demand outcomes. And so if we get outcomes, where we actually pass tax reform and get the first steps of health care reform done, the first fulfillment of the president's pledges when it comes to immigration and border security, look, we're going to be in fine shape a year from now.

And if we don't get anything done, then people are going to say, what -- what use are you? So, we know the consequences of failure are very real. And that motivates to us get this thing done in a timely fashion.

CAVUTO: You know, since a lot of people have criticized the plan, maybe given the limitations and the budgetary requirements in order to get this through reconciliation in a simple majority vote in the Senate, that it's already watered down, and now the Senate could water it down some more.

MCHENRY: In the Senate? Well...

CAVUTO: In either event, that this is not what it was originally billed to be, that a lot of people are just disappointed that the tax cut isn't that big?

MCHENRY: Well, originally, it was supposed to be revenue-neutral, and the Senate was able to come up with a compromise to have a $1.5 trillion of tax relief.

Am I disappointed in the Senate? Look, I'm a member of the House. We wake up every day disappointed with the Senate. It's what we do. It's not a partisan issue.

MCHENRY: It's just the nature of a bicameral legislature.

CAVUTO: You should hear what they say about you.

Thank you, Congressman, very, very much.