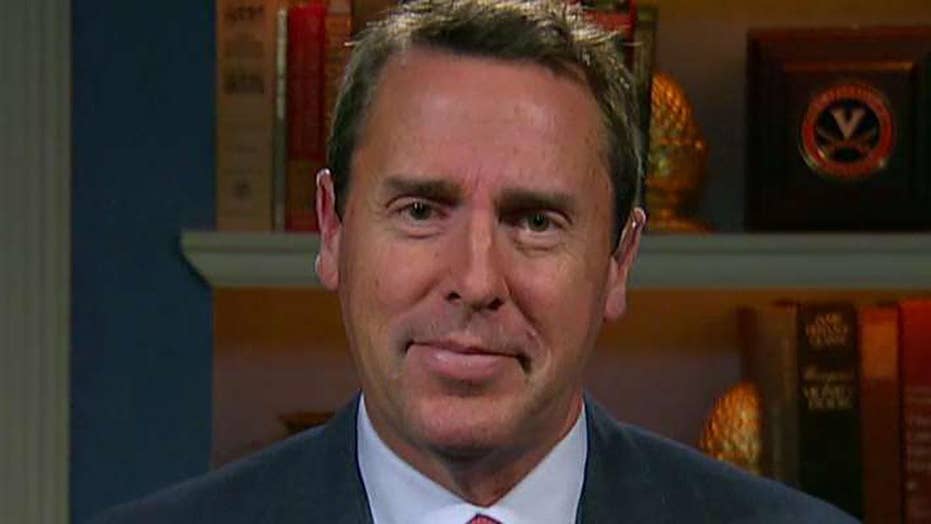 This is a rush transcript from "Your World," September 8, 2017. This copy may not be in its final form and may be updated.

Now, my next guest was among them, not because he didn't think that Harvey deserved the aid, but because of the way it was handled and what it was linked to.

CAVUTO: Explain your position here. You don't like the way it was handled. Right?

WALKER: No, we don't. In fact, those 90 conservative Republicans actually voted for Harvey funding on Wednesday. What happened in the Senate, when we attached kind of a backroom deal measure to raise the debt ceiling, that was the problem.

This has been a problem for the last several years, continuing to raise the debt limit, adding more to our national debt, without any kind of meaningful reforms.

CAVUTO: Then how do you feel, Congressman, about the president coming up with this measure with Chuck Schumer and Nancy Pelosi, he says to sort of clear the decks for addressing the tax package in the next few weeks?

WALKER: Listen, Congress -- and I believe the grade of the 115th Congress will come full present over the next two to three months, 60 to 90 days.

I believe we should be able to do both, be competent enough that we can work on tax reform, while also making sure that we're trimming the spending.

That's what many of these -- listen, these 90 conservatives, they are the ones that have been out front supporting the Trump administration, the Trump agenda.

It was a little disappointing to see how this manifested itself, and even with the treasury secretary, Mnuchin, coming to our conference this morning. I will tell you, it didn't go over well.

WALKER: Well, basically, there were questions asked that couldn't be answered.

That is creating some pause. And even some of the guys who I understand from Texas needed to support this, certainly no condemnation there, but there were many more than just the 90 conservatives who had some major questions.

CAVUTO: Do you trust the president on this?

Working with Schumer and Pelosi, we're hoping that was just maybe a one- time sending the message.

But we have sent out 19 reforms.

CAVUTO: Sending the message to whom, to Republicans or to everyone, get on board?

WALKER: Well, maybe, everyone, get on board. I don't think his message is just reserved for Republicans.

But we sent out 19 different reforms. We were not asking for all 19.

CAVUTO: So, lately, he's been zinging Republicans a lot more than Democrats.

In fact, you were mentioning the debt, sir. One of his ideas apparently he's working on with Chuck Schumer, maybe Republicans -- I just haven't heard that -- is to erase this whole debt dilemma every time it comes up every 14, 15 months, just stop it.

WALKER: It would be a concern, because, as crude as it is, the debt ceiling is one of the few opportunities that we have to bend back that bell curve, whether it's Medicaid reforms, whether it's making the CBO more transparent, or even putting other amendments or reforms to it.

That's the vehicle that we must use to be able to do something Republicans promise to do, and that is to watch our federal spending.

CAVUTO: All right, sir, thank you very, very much. Very good having you.