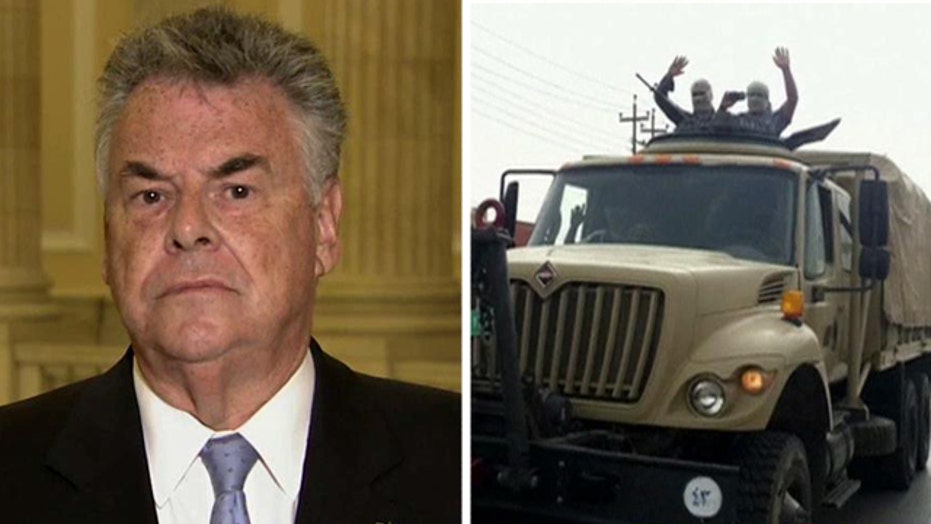 Rep. King discusses threat to US amid Mideast terror

This is a rush transcript from "The Kelly File," July 10, 2014. This copy may not be in its final form and may be updated.

MEGYN KELLY, HOST, THE KELLY FILE: Breaking tonight, one terror group with its sights on America gets its hands on nuclear materials while another tries to raise its stakes in a war with a key U.S. ally. Good evening and welcome to 'The Kelly File' everyone. I'm Megyn Kelly. Let's start with Iraq where the group that just created the world's first terrorist stakes now has its hands on some hulking American made armored vehicles. These things stand around 10 feet tall and were built to withstand everything from IEDs to land mines and more. The Iraqi government also confirming today that the group now said to be targeting the U.S. homeland just got its hands on nearly 90 pounds of nuclear material. The stuff of so-called dirty bombs. The Pentagon trying to reassure people today by pointing out that the uranium now in the hand of ISIS is not the more deadly weapon's grade version. But that doesn't much matter when you are out to terrorize. How do you feel? You don't care if ISIS gets uranium on you, do you? It's not weapon's grade, not to worry.

And just 500 miles to the west of there, rockets are tonight raining down on Tel Aviv, while in the Gaza strip, the terror group Hamas is telling civilians to just ignore the advanced warnings that Israel gives before it launches its air strikes which means Hamas is effectively ordering residents to die in order to further that group which we recognize as a terror organization. That group's cause.

Congressman Peter King is the former chairman of the House Homeland Security Committee. He was briefed earlier this week about the threat from this terror group in Iraq and he has been monitoring the events in Israel. Congressman, good to see you tonight.

KELLY: And so how concerned should we be now that ISIS has its hands on 90 pounds of uranium.

KING: Megyn, yeah, we should be very concerned. And the fact that the government or the administration is trying to pass this off as not being enriched and perhaps not being weapon's grade, the fact is it still could be used for a dirty bomb. This is an issue we've had to confront to New York. That's why the NYPD set up the secure the city's program. You get uranium, you have radioactive material and you case it in explosives and conventional explosives and the blast would kill many people and the impact of the radiation will contaminate an area.

Now, you put that into downtown Baghdad in a market area or we're going to cross the border into Jordan and set it off in Amman, one thing you'd have loss of life but the psychological effect and the contamination that would result from that radioactive material would have a severe impact, and for people who say it's not that significant, I wouldn't want it going off in my backyard, in my neighborhood, at a department store in my district. I wouldn't want it going off in any type where there's a large number of people gathered. So now, this is very serious and very concerning.

KELLY: Hmm, and I mean, not to mention what they could do to the water supply and other --

KELLY: -- using it as a potential contaminant in other words, should they get the opportunity.

KING: Oh, ISIS is a threat to us. In fact, three years ago, when they called themselves al Qaeda in Iraq, there were three of them, three members were arrested attempting to attack Fort Knox in Kentucky. They've made it clear they want to attack the United States. So we've have to be very, very concerned about them coming here as far as explosive devices on planes, any other way they can get in here. Now, we have to be very concerned. They're very lethal, very deadly and if anything, even more fanatical than core al-Qaeda. It's a very real concern.

KELLY: What should the Obama administration be doing? Because, you know, obviously we have these advisors on the ground in Iraq but now we've got a terror group that's so radical al Qaeda wants nothing to do with it. And it's got components -- potential components of at least a dirty bomb if not a nuclear bomb.

KING: Right. Well, first of all, not to relive the past but this wouldn't have happened if President Obama hadn't pulled all of our troops out. But we are where we are right now. And it's not just Iraq. It's Syria and Iraq, they are setting up a caliphate there. I believe we have to use air power to at least blunt the ISIS attack now. The offensive, blunt that offensive. Also, I believe that we should use Special Forces. They should be on the ground and not so much engaged in combat but being able to pick out targets and we should be also training and working with our allies in the region but this has to get top, top priority. This is a major threat to us.

KELLY: Congressman Peter King, thank you for being here.