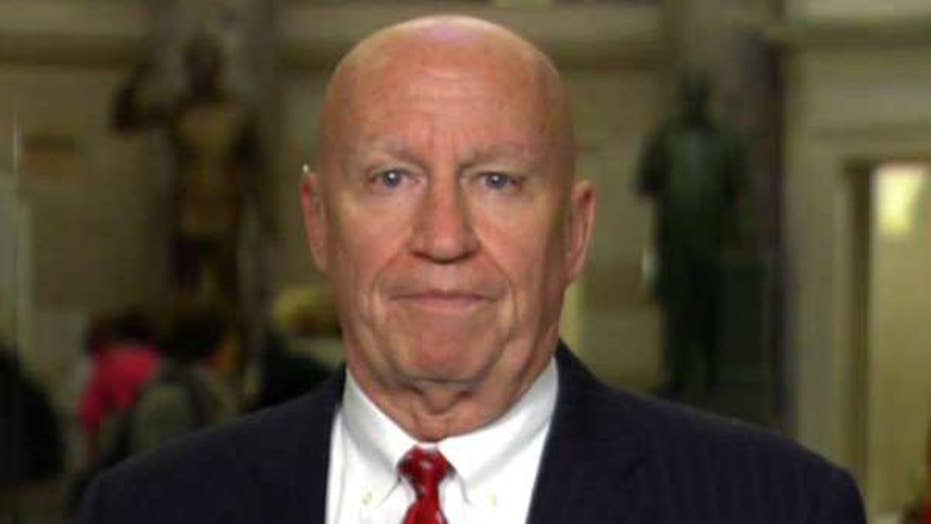 Chairman of the House Ways & Means Committee says he is pleased by the effort Republican lawmakers are making on the GOP tax bill in conference, praises President Trump's leadership.

This is a rush transcript from "Your World," December 12, 2017. This copy may not be in its final form and may be updated.

NEIL CAVUTO, HOST: All right, tomorrow, the president is slated to give a speech, his closing argument, we're told, even though it's technically not the closing argument time. But that's the same time as this conference committee starts hashing out the details, where they agree, where they don't disagree.

The guy in the center of that storm, he always stays pretty calm throughout, is the Texas Republican House Ways and Means Committee chairman, Kevin Brady.

Chairman, very good to have you here.

CAVUTO: I know you don't like to address rumor. But I'm tempting to address a lot of rumors going out...

CAVUTO: ... including one that you guys are contemplating a lower top rate. Is that true?

BRADY: So, there are a lot of rumors going around and a lot of ideas being promoted.

And the truth is, I can't confirm them because we're really working on, I think, on a comprehensive agreement. We're making -- I'll tell you this. We're making good progress. I like the direction we're going.

More importantly, I like the timetable that we're going to hit, which is a conference committee report at the end of the week, after we meet tomorrow in a public conference setting.

CAVUTO: So, you said you can't confirm, but you didn't say you can't deny. So I find that rather intriguing.

CAVUTO: I don't even know what that means.

Let me ask you, though, Chairman, about this idea. How open are you personally? Because, truth be told, I'm not blowing you smoke, but you were doing this long before anyone glommed onto it, including the man who sits in the White House, who, even before he was a candidate, you were wrestling with these numbers.

How open are you personally to revisiting the rates themselves, the individual rates themselves? Now, obviously, there's seven in the Senate plan. There are four technically in yours. Where do you stand on that? Fewer, more? What?

BRADY: Yes, so, the answer is open. And here's why. Our House Republican members are open as well.

They want the most pro-growth tax code we can get, which is a combination of really strong middle-class tax relief, great incentives for families and children, and getting that top rate low for both our small businesses and individuals as well, because you will remember we are cleaning out a lot of those provisions, like state and local income taxes.

And so it really seems appropriate to address that through the rates.

But you're not against, again, personally lowering a rate on one side for individuals, if it meant raising a corporate rate or delaying that rate?

BRADY: Oh, look, so, I am -- I want to drive the rates down as low as we can on the business and the family side.

I want to make this point as well. The House believes -- well, I believe and the House believes that these tax cuts ought to occur now. We think our companies, especially Main Street or otherwise, can't compete around the world. China, Europe, Mexico, Canada, they're cleaning our clock.

Also, you saw the new report from American manufacturers. Two-thirds believe this will help them compete. Half believe they will be able to expand their manufacturing here in America.

Why would we delay that? Let's get that happening in the economy now. So we're working closely with President Trump and with the Senate. I'm trying to make sure we get these tax cuts in place right away.

CAVUTO: Are you aware of what he is going to say in his speech tomorrow? It's presented as a closing argument, but what do you think?

BRADY: I'm not. But guess is he is going to make the case America has fallen so far behind and this code has become so complex. We have got to act now.

CAVUTO: Do you see any chance you remove the AMT? One of the ideas that has been advanced -- I think you were personally surprised that, in the Senate plan, though it was passed, they snuck in the AMT.

And that Alternative Minimum Tax for corporations and individuals was like a big shocker to some of your House colleagues. You want it out of there?

BRADY: Yes. The answer is yes.

The Senate, to their credit, got this bill out of the Senate. That was a lot of hard work. And congratulations to them there.

This is an area, because they had to put it in, they really have been the leaders in removing it as well. And so they have brought some really good ideas I think to the table.

Now, Ronald Reagan after his tax cuts came to fruition, their implementation was delayed, and hence Republicans in the midterms lost badly that year, 1982. Now, it was decades before I was born, as you might be aware, Chairman.

But one of the things that I have noticed is that delay doesn't work for the party that is pushing major historical legislation. Are you worried that the impact of this is going to be put off?

BRADY: I want growth now. I want those jobs coming back from overseas now. I want businesses making decisions on their capital in those expansions now, which is why we're working really close with President Trump and the Senate on making this happen now. It isn't finalized yet.

CAVUTO: When you say working closely with the president, what are you doing? What are you trying to win him over on?

The whole White House is, in my view. And so, look, no one has pushed harder for growth and getting America leapfrogging back to the lead than President Trump. So, I really like the direction we're going here.

CAVUTO: All right, because you have probably seen these reports in Barron's and others that Yardeni, some big number crunchers, who say, the corporate rate, though it's advertised to be 35 percent, Trump actually much lower than that. If the Republicans tinker with raising it above 22 percent, you're actually kind of at a wash here, that it's not going to be the big bang for the buck here, because the average prevailing rate that they're paying is in the mid-20s now tops.

And if you're competing worldwide, this tax code is a mess here in the United States. We tax you here. We tax you abroad. And so there's so much opportunity both to fall behind and to game the system. We clear that out.

And so we get true tax rates for everybody. And, Neil, I think sort of that pro-growth simplicity and being able to compete tax code with any country in the world, boy, that brings jobs home. That's good for us.

CAVUTO: Chairman, it might be apples and oranges, but not entirely, since a lot of yes votes in the Senate came with a wink and a nod that they would be assured of things in the budget that they're cooking up here.

And one of those who is concerned is Rand Paul, saying he doesn't want to the debt. The way he's hearing it talk about now, he would be a no vote on that.

Would this possibly fall apart because of a budget and spending priorities, having nothing to do with the tax cut itself?

BRADY: I don't think so.

I think both the House and the Senate have kept those issues separate. I do agree, I think we all agree in the Republican Party that, beyond getting the economy going growth and revenues, you have got to restrain spending.

We really have to redesign. Just like we are on the tax code, we got to redesign the spending side as well. And so I think, from that standpoint, the growth, the revenues, the economy, the jobs from this very important to a balanced budget.

CAVUTO: Do you think in the end this does happen before Christmas, back to what we talked about, with all of these arguments back and forth?

CAVUTO: Because we don't really feel like working Christmas Eve following you. Just saying that.

BRADY: Yes, sir. We're with you on that one.

CAVUTO: The man in the middle of this storm. And he's taking it from all sides. But it's a tough job putting this all together, whether you like or dislike whatever they're putting together. It's consequential enough to change the tax plans for millions of Americans and corporations. And he's in the center of it.