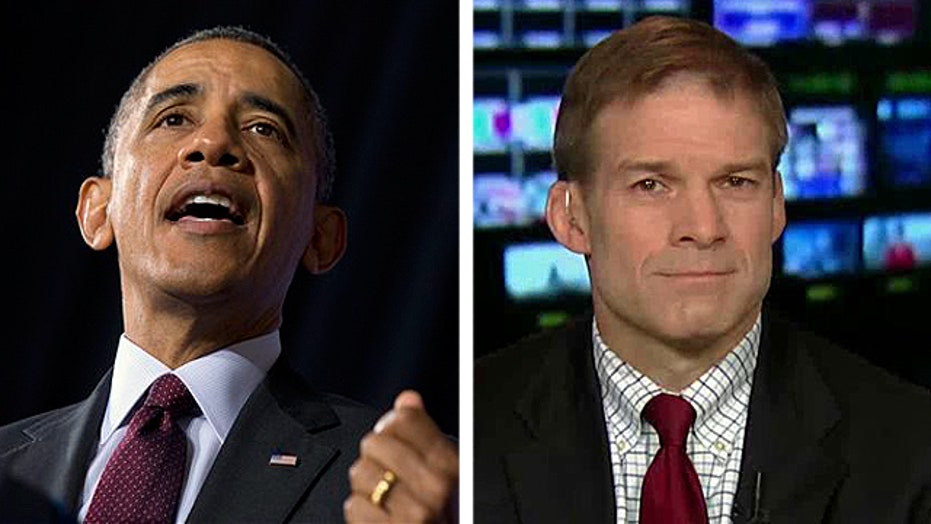 This is a rush transcript from "The Kelly File," February 4, 2014. This copy may not be in its final form and may be updated.

MEGYN KELLY, HOST: Ohio Republican Jim Jordan is on the House Oversight Committee and the House Judiciary Committee, and he's the man you heard there, questioning the Deputy Attorney General James Cole. Sir, it's good to see you again tonight.

KELLY: And so, let's start with that. The president goes on national television on Super Bowl Sunday -- never more eyeballs on the television -- and tells our own Bill O'Reilly that there's not a smidgen of evidence of corruption. And you were trying to get to the bottom of what in your questioning?

JORDAN: Well, I mean, Megyn, let's remember the basics, you have Barbara Bosserman who is a max-up contributor to the president's campaign. There are 10,000 lawyers in the Justice Department and she gets picked somehow, some process where she gets pick to head up the investigation. So I believe the president can be confident because he knows his person's running the show. His person's running the investigation. We can't get one answer from the FBI, one answer from the Justice Department about how many people are assigned to this case, who the lead agent is, how they're doing it, but the president's confident even though it's an ongoing investigation.

KELLY: So, you have been pressing them for information trying to get facts about the investigation. And what have they been telling you at Justice?

KELLY: So, they can't comment to you on it because it's an ongoing investigation.

JORDAN: Right. Yeah. But somehow the president is confident there's not a smidgen of corruption that took place there, and as we heard two weeks ago, leaked to the Wall Street Journal, there's no recommendations for prosecution. They don't think they're going to recommend any prosecutions, any leaks coming from the Justice Department. How does that reassure the American people that this is a real genuine true credible investigation?

KELLY: And what is the effective, the commander-in-chief, of our president coming out there and basically announcing the verdict before it has officially been reached by the jury, at least as far as they're telling you. Justice is saying, they haven't yet concluded whether there should be criminal charges brought. And the President of the United States is saying, it's done.

JORDAN: Yeah, I mean -- is he sending a signal to Ms. Bosserman? Hey, here's what I want to have happen. Remember, Barbara Bosserman is a max-up, $6,750 she gave to the Obama campaign in the Democrat National Committee over the last few years. So, she has a financial interest in a specific outcome. She has a financial stake in the success of the president. So, and yet she's heading the investigation. So, of course the president is confident. Of course, he can say there's no corruption, because the fix is in. The person who's heading the investigation gave him a boat maxed-out contribution, gave him a bunch of money. I think maybe he sent her a signal Sunday. Not just the whole world when he talked to Mr. O'Reilly. But I think he sent her a signal saying, hey, here's what we need to have happen -- no problem here.

KELLY: He was asked -- Jay Carney was asked whether he misspoken that interview, and Jay Carney said, absolutely not, he did not misspeak. So, we will see where this goes and what Ms. Bosserman's final recommendation is. Congressman, good to see you.