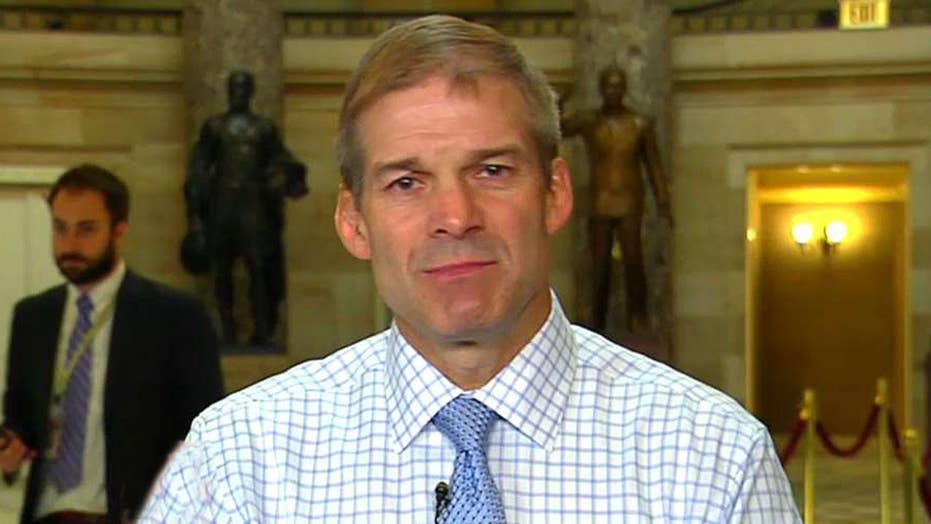 Rep. Jordan on Trump calling out GOP senators who voted no

House Freedom Caucus member weighs in on 'Your World'

This is a rush transcript from "Your World," July 25, 2017. This copy may not be in its final form and may be updated.

DONALD TRUMP, PRESIDENT OF THE UNITED STATES: So, we had two Republicans that went against us, which is very sad, I think. It's very, very sad for them.

NEIL CAVUTO, HOST: All right, the president obviously very concerned about those two no-votes he got from Republicans, the only two no-votes, Lisa Murkowski and Susan Collins.

The message the president is sending, he's very disappointed.

Ohio Republican Congressman, Freedom Caucus member Jim Jordan, I guess that's the message the president will send for anyone who makes life difficult for getting an eventual measure that will be an alternative to ObamaCare.

Do you feel that kind of pressure? Does it matter to you what the president is saying, Congressman?

REP. JIM JORDAN, R-OHIO: I think we have got to do what we told the American people we were going to do.

That's what the president wants to do. I think you can look at the glass half-full. We got 50 votes. We're moving on to the legislation. Hopefully, we're going to get something passed that will come back to the House either in a conference committee, or maybe we will support it. We will just see what it looks like.

But this is a win today. And that's positive. So we're that much closer to getting rid of this law we call ObamaCare that's been such a mess for American families.

CAVUTO: All right, we had mistakenly shown some video, by the way, of Shelley Moore Capito of West Virginia, who did in fact vote for this measure. So, I apologize for that.

CAVUTO: So, where does this go? I always get the sense -- and a couple players have told me this delays the inevitable, that you have got to win over folks, and it's almost too close to call in that regard.

But we went through the same process in the House. And we were able to get there, as you well know, Neil.

JORDAN: We in the conservative Freedom Caucus, we opposed it early on. We made the bill better. There were amendments offered.

And in the end, we said this is a pretty good step in the right direction and we supported it. I think the same process can play out in the Senate. But we always need to come back to the basics.

What did we tell the voters we were going to do? What did they elect us to do? They elected us to repeal and then replace it. And, frankly, if this process breaks down, I'm all for a clean repeal. In fact, we in the House started that process last week, in the Freedom Caucus, a discharge petition process to bring that clean repeal bill up, pass that, and then come in with a separate replacement legislation as well.

That was what we thought we were going to do initially, and I'm not opposed to that now. In fact, I think that would be a good approach as well.

CAVUTO: I know, in this process here that you know so well, Congressman, after the debate, they start adding amendments on to win over votes.

And, gosh darn it, it can be more expensive than the original measure when that starts happening. So, what is your cutoff point at which you say, no mas, I'm out of here, this is not what I want?

JORDAN: I think we have got to see what gets through the Senate.

And, look, we have got a lot of good conservative senators over there. Senator Cruz, he has got his amendment in the base legislation now, this consumer choice, this consumer option, which we thinks make sense, which we know will help bring down premiums for folks in the individual and small group markets.

Senator Lee is involved, Senator Paul, Senator Johnson, Senator -- there are lots of good conservative senators over there who are going to watch out for what you just described. So, in the end, focus on what we told the voters we were going to do. Let's get this thing across the finish line and then let's continue to do what the voters elected us to do on November 8, 2016.

CAVUTO: Congressman, the president is on his way to your state here.

And it comes at a time where the president had expressed frustration with this back and forth on health care, so much so that, for a while, he was briefly suggesting just let the thing implode, ObamaCare implode, hang it on the Democrats. He thought better of that.

But this is a tough battle. Now that the tax cuts are the next battle, and he really, really wants that, and that's what everyone seems to be betting on the real battle that, if Newt Gingrich is right, will have the biggest economic impact right off the bat.

Do you see a tax agreement coming to form in the fall that would be retroactive to January 1?

But we need to do both things, because we promised both things. That's we told the voters we were going to do, both repeal ObamaCare, replace it with something that is more patient-centered, and reform and replace our tax code, and lower the tax burden on families, and certainly lower the corporate rate, because we have the highest in the world.

So, let's get about doing all that. The one thing we have talked about before, Neil, is, I am convinced we shouldn't function in a revenue-neutral world when it comes to tax policy. Revenue-neutral is a fancy Washington- speak way of saying, tax burden stays the same, we just shift around who pays what.

CAVUTO: Some of your moderate colleagues in both the House and the Senate, though, sir, as I'm sure you're aware, are very revenue-neutral mind-set.

And some have even said don't make these tax cuts across the board and certainly not for the wealthy. What do you think?

JORDAN: All I'm saying is, in revenue-neutral, the connected class get a good deal, the middle class gets a bad deal. We should not do that.

We should be focused on deficit-neutral. And this is where I will be glad to work with my moderate colleagues and say, let's cut taxes, let's let families keep more of their money, let's lower the corporate rate, and then let's cut spending.

After all, that's what Republicans are supposed to stand for, so let's focus on that.

CAVUTO: All right, but if Newt Gingrich says he can live with where he gets everything else, a tax cut that doesn't materialize for the wealthy, could you?

JORDAN: Well, yes, we will look at the package.

What I'm most focused on is, everybody knows our corporate rate is too high. It's the highest in the world. That needs to come down. Everyone knows our tax code is too complicated. It needs to be simplified. And, frankly, the burden on middle-class families does need to come down.

So, let's focus on lowering the tax burden for everyone and let's also focus on controlling spending. That's what Republicans are supposed to stand for, not some fancy revenue-neutral idea, where you raise taxes on some, cut it on others.

JORDAN: And then, in that game, the lobbyists always win and the corporations always win, and families always lose.

CAVUTO: All right, Jim Jordan, thank you very much, the House Freedom Caucus big cheese there.

CAVUTO: We will be watching that very, very closely.

The Senate is debating it as we speak. This could go on and on and on.