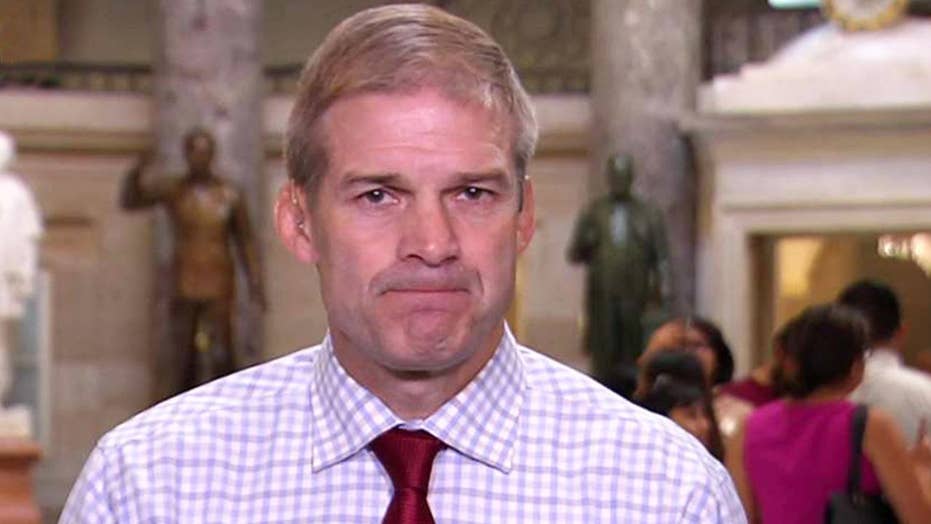 This is a rush transcript from "Your World," September 26, 2017. This copy may not be in its final form and may be updated.

NEIL CAVUTO, "YOUR WORLD" HOST: To a man who is going to be instrumental in this entire process, Jim Jordan, Ohio Republican, House Freedom Caucus member.

REP. JIM JORDAN, R-OHIO: We need three general principles in this plan. Will it actually cut taxes for families? Will it simplify the code? Will it grow our economy?

And then we want some specifics. We outlined this in our piece in The Wall Street Journal that Mr. Meadows and I did last week. Give us four specifics.

CAVUTO: You're talking about Mark Meadows, the man who runs the Freedom Caucus.

Those are the four big questions. So, let's make sure we're doing the three big things, cutting taxes for families, simplifying the code, growing our economy. And then let's get answers to those four specific questions.

So, we want to get it right on tax reform and make sure it gets done.

CAVUTO: All right. There are a lot of people who are nervous that Republicans will botch it, because of what happened on the health care rework effort, and that this could be even more problematic, because there are a lot of differences between you guys. What do you say?

JORDAN: Well, I think that what we went through on health care, look, we still need to work on that. We still need to get it done. And it's something we told the American people we were going to accomplish.

But I think, in light of going through that, that puts more emphasis on getting it right this time on tax reform. I do think it will happen. We have got a retreat tomorrow and we will see what leadership rolls out.

But I will tell you, Neil, because of the fight that the Freedom Caucus has and the debate we have had, the border adjustment tax is gone. I don't think we're going to function in a revenue-neutral environment, which is a good thing, because revenue-neutral is just Washington-speak for the tax burden stays the same, we shift around who pays what.

In that scenario, what always happens is middle-class families lose. So, we're not for that. We're just for letting people keep more of their money.

CAVUTO: Do you think, whatever is proposed tomorrow, so, just to be clear when you're talking about revenue-neutral, to pay for tax cuts, so you don't think that will be part of this mix?

CAVUTO: That they might not be paid for, but the hope being among conservatives yourself is that they produce revenue down the road through dynamic growth and all that?

JORDAN: Well, that's happened every time it's been tried. So, we got the history that says that will be the case.

CAVUTO: Do some of your moderate colleagues agree? Because when I talk to them, they get very itchy and antsy.

JORDAN: Yes, revenue-neutral is -- some members like that, because it allows politicians continue to spin.

We don't want to function in that world because we actually want people to keep more of their money and we want to grow our economy. The Senate budget, that language doesn't function in a revenue-neutral environment, what they talk about in their budget.

So, we will talk about how this moves forward. But I think we're going to move away from that revenue-neutral approach, which I think is a good thing.

CAVUTO: You know, Congressman, I was talking to your colleague Virginia Representative Brat, who was telling me that he is convinced that what they're going to come up with is an across-the-board cut that will include the upper income, which would go in the face of what President Trump had said would exclude the upper income, in other words, that they won't benefit from a rate cut, nor should they.

JORDAN: We will see.

What I don't want to do is raise anyone's taxes. I want to lower taxes for middle-class families. I want to construct the tax code on the corporate side which is conducive to producing economic growth.

Let's make sure that happens.

CAVUTO: All right, it wouldn't be a matter of they're getting their taxes raised, the rich, it would be that they would stay the same. Are you -- would you be comfortable with that?

JORDAN: I think as long as middle-class families, their rates go down, I think that's fine.

JORDAN: I'm just -- I'm not -- we're Republicans. We think freedom involves you keeping more of your money. We're not for raising people's taxes.

JORDAN: But if some rates stay the same and others go down, and the corporate rate goes down, and we produce a code that's going to grow the economy, that's great.

CAVUTO: Congressman, let me ask you a little bit about what going down the road this is going to mean for Republicans and the idea that they need to make these retroactive to get the earliest bang for the buck.

It's getting kind of late in the year for that sort of thing. But if you had your preference, would they and will they be retroactive?

JORDAN: Yes, and I hope they are. I think that's the plan.

Again, that means we have to get it done here pretty quick, I think this calendar year. But I'm for them being retroactive. I'm always for letting people, citizens, families, keep more of their money.

After all, it's their money.

JORDAN: Just again, I go back to this revenue-neutral idea.

When did we adopt the position that somehow letting you keep your money is a cost to the government? I start from the premise that it's your money. Let's let you keep it. You're going to spend it better. You're going to help our economy to grow. And in the long run, we will get additional revenue to the treasury to deal with that debt burden that we face.

CAVUTO: Do you think this is make-or-break for Republicans, after the failure of this latest health care rework, that this succeeds, or you guys are toast?

JORDAN: When I'm home talking with families that I get the privilege of representing, they are frustrated. They have had it, and appropriately so.
They want us to get something done.

So I do think we better get this tax reform done. Let's get it done right, but let's also get it done this year.

CAVUTO: If it were pushed back to next year, unlikely I'm sure as you want that to be, could you live with that if it means you get a passed package?

I think -- you know, I think this is moving in the right direction. Conversations we have had with leadership, conversations that Chairman Meadows had with the White House, I think have all been positive. Conversations we're just -- we're having with our colleagues, and movement we have seen on giving us more detail as we head into tomorrow's retreat, so that we're comfortable with moving this process along, that's moving in a positive direction.

So let's see what happens tomorrow. But I feel good about where we're headed.

CAVUTO: All right, Congressman, thanks for taking the time.

JORDAN: You bet. Thank you.

CAVUTO: We shall see all those details tomorrow.