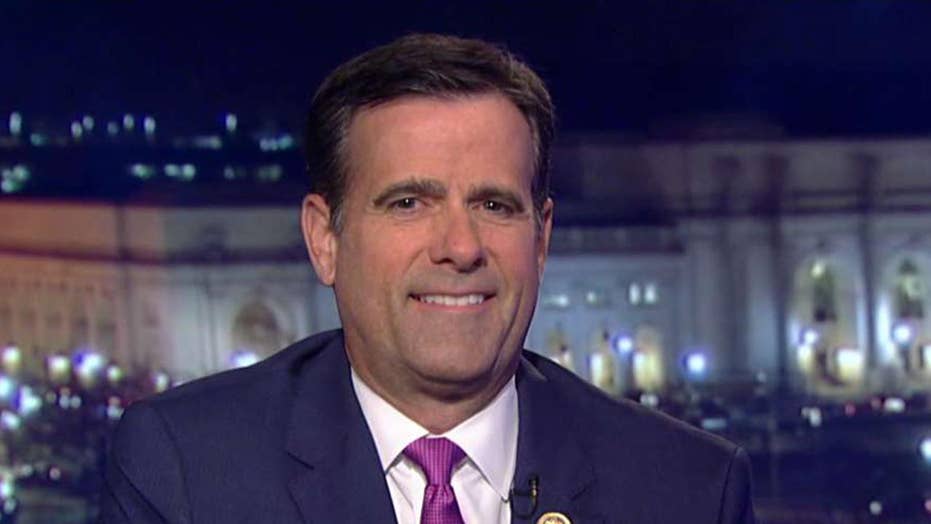 This is a rush transcript from "Special Report with Bret Baier," December 9, 2019. This copy may not be in its final form and may be updated.

Bret Baier, anchor: Let's get some insight into the impeachment hearing and the IG report from Texas Republican Congressman John Ratcliffe, who serves on both the Intelligence and Judiciary Committees. Thank you for coming here live.

Rep. John Ratcliffe, R-Texas: You bet. Appreciate it, good to be with you, Bret.

Bret Baier: I want to ask you about impeachment first. Is it a foregone conclusion that the House will vote to impeach President Trump?

John Ratcliffe: Yes, it appears that the Democrats have burned the lifeboats behind them. They've made this decision. They've got nowhere to go. I think they have to answer to their base. And I think it's a terrible decision for the American people. You can see what it's not based on. It is entirely political. But, as a Republican, I've got to tell you, Bret, it's good for us.

Bret Baier: Do you sense or have any reason to believe that any of your GOP colleagues will vote for impeachment?

John Ratcliffe: Nope, and I, on the other hand, I can say with pretty good certainty that there will be Democrats that won't vote to impeach the president.

Bret Baier: Do you think Pelosi, Nancy Pelosi has the votes right now?

John Ratcliffe: I think she probably does. I think she won't call the vote unless she has the votes. They're going at breakneck speed. They're losing support. And before they lose enough to get it across the finish line, that's why they want to have this vote as early as next week after only being in the Judiciary Committee, the committee of jurisdiction, for less than a week.

Bret Baier: What happens if your side does not get a minority day hearing, which it doesn't look like it's happening?

John Ratcliffe: We won't. I think it'll just demonstrate to the American people how perverted this process has been, how they won't follow any of the precedents or standards, particularly as it relates to fairness during the process. And I --

Bret Baier: You mentioned today, an interview with the inspector general --

Bret Baier: -- of the Intelligence Committee is a little -- we're trying to follow it here on set.

John Ratcliffe: Is a little cryptic.

Bret Baier: Yeah, I had to be.

Bret Baier: Yeah, but what were you trying to say?

John Ratcliffe: I had to be trying to be because it's still not been released by Chairman Schiff. It's the first deposition that was taken and it's the only one that hasn't been released. And the reason is, it doesn't have anything to do with protecting the whistleblower identity. It has to do with protecting the whistleblower and Chairman Schiff from having their credibility questioned. The whistleblower did not make truthful disclosures to the inspector general. I questioned the inspector general about that. The transcript will reveal that. It ought to be made public. No one should be voting to impeach an American president before they look at the real origins of this. The origins of this was not a whistleblower filing a complaint on August 12th. It was a person who later became a whistleblower walking into Chairman Schiff's office two weeks before that.

Bret Baier: So, you have zero hope that you will hear from Adam Schiff or the whistleblower?

Bret Baier: Okay. Let's turn to the IG report. This is the Senate minority leader, Chuck Schumer. Take a listen.

Sen. Chuck Schumer, D-N.Y.: This report conclusively debunks the baseless conspiracy that the investigation into Mr. Trump's campaign and its ties to Russia originated with political bias.

Bret Baier: That was the top headline from what a lot of the Democrats focused on in this line: "We did not find documentary or testimonial evidence that political bias and improper motivation influenced the FBI's decision to seek FISA authority on Carter Page." Your response to the senator and what you take from this report?

John Ratcliffe: So, there's two important things that went on here. One, did the FBI meet the very low threshold for an articulate, factual basis to reasonably suspect that there was a threat to national security? The inspector general made the conclusion that they met that very low threshold to get the investigation started. The problem for the FBI and for Democrats that want to somehow declare this as a victory is everything after that is an indictment of the process. Even if there was a basis to open it, everything that came after it was exculpatory. There was no reason to continue it. And the second part of this that's really important is when they got to the stage of a FISA application in October, as you see in here, this report is just completely full of what the what the inspector general politely says are "errors and omissions," another way of saying that are lies, misrepresentations, false statements, and the failure to turn over exculpatory information.

Bret Baier: Is that what strikes you --

John Ratcliffe: It's an indictment.

Bret Baier: -- about this report?

John Ratcliffe: Absolutely. So, it's a validation of every one of us that had been saying there was FISA abuse. That's why the attorney general's statement today was, "This is clear evidence of FISA abuse." Unfortunately, we were right about that. And that's a real problem for the FBI.

Bret Baier: But this doesn't back up the president's, "It's a coup to take him down," in this report.

John Ratcliffe: Actually, I don't know that you can say that, Bret.

Bret Baier: Well, at least the IG says that.

John Ratcliffe: Well, the IG's role is to find facts, not to necessarily make conclusions. And I actually agree with most of the facts that the IG finds. And the facts in here say that that the FBI's senior leadership kept an investigation going where they knew they had no evidence that was based on a dossier that was entirely unreliable. And they knew it. And they did they did that to continue an investigation into a candidate that then became president of the United States. And they didn't have a basis to do that.

Bret Baier: What about --

John Ratcliffe: And that's in this report.

Bret Baier: -- what about the criticism of the attorney general that he comes out with this statement today, clearly differing on several points with the IG, and a short time later, the U.S. attorney, John Durham, puts out a statement that he says does not jive with the --

Bret Baier: -- what the inspector general finds? I mean, it's pretty rare, is it not?

John Ratcliffe: No, it's not. Because, really, what it is is a sign of respect. John Durham waited until Horowitz's report came out. That's why he hasn't made public statements. But now that Horowitz's report is out, he's free to talk about the fact and what he has found. And the first thing that he told you was, "I appreciate the inspector general, but my jurisdiction isn't limited, and I have greater jurisdiction, and what I have found is not consistent with his conclusions about that seminal issue, the predication issue." The attorney general's special prosecutor in this case, John Durham, is saying, "I have a problem with the predication here. I disagree with the attorney general. There was not probable cause to open this investigation." So, you know, I think --

Bret Baier: Well, critics would say, "If he's a prosecutor, does he make his case, bring it to a grand jury, make a charge before making a statement?" Republicans were very critical of James Comey --

John Ratcliffe: And he didn't make a finding with respect, though -- what he said was, "I have -- I take issue with the inspector general's findings and conclusions regarding predication issue."

Bret Baier: He didn't say what his was?

John Ratcliffe: He didn't say what his was. But I think it's a clear sign of where he's going on this, which is that, "I have greater jurisdiction. I've done a lot more with regard to this investigation."

And I think, in short order, we're going to hear that John Durham's going to find that the predication just wasn't there, as most of us really don't see it even in this report.

Bret Baier: So, we've characterized on this panel, talking about this, that there's two tracks here. There's the impeachment track and then there's this John Durham track, IG track. And is it your sense that there is a race now to figure out who's going to get to the finish line on what happened?

John Ratcliffe: I've said that all along, that that's what's driving this fast track. They want to impeach this president so that when news like this comes out, and they say, "Gosh, we're sorry. There was FISA abuse, but the guy still should have been impeached." That's why they've been racing through this. This report, by itself, I think the more you look at it, the more you see it's an indictment of Jim Comey's leadership at the FBI. I mean, this is, you know, a profound statement about how bad things were there with regard to an investigation that was continued without evidence to support it. I think folks at the FBI are horrified and dismayed by what's in this report. And it's only going to get worse, I think, by what John Durham finds because he has the ability to go out and talk to the intelligence communities.

Bret Baier: And people who weren't working in the government?

John Ratcliffe: And people who weren't working in the government.

Bret Baier: Last thing, Democrats are moving a prescription bill this week. It looks like -- we're hearing there's movement on USMCA. Does that undercut, in any way the GOP argument that Democrats are ultra-focused on impeachment --

John Ratcliffe: It's been --

Bret Baier: -- and can't get anything else done?

Bret Baier: -- it's been their plan all along. Nancy Pelosi -- we've -- it's the worst-kept secret that once they voted on impeachment and moved that off, they would shift to, "We're ready to get to work. You know, we're moving forward on USMCA, prescription drugs, all the things that we've been criticizing." The problem, Bret, is we should've been doing this three, four, five months ago.

John Ratcliffe: Great to be with you.