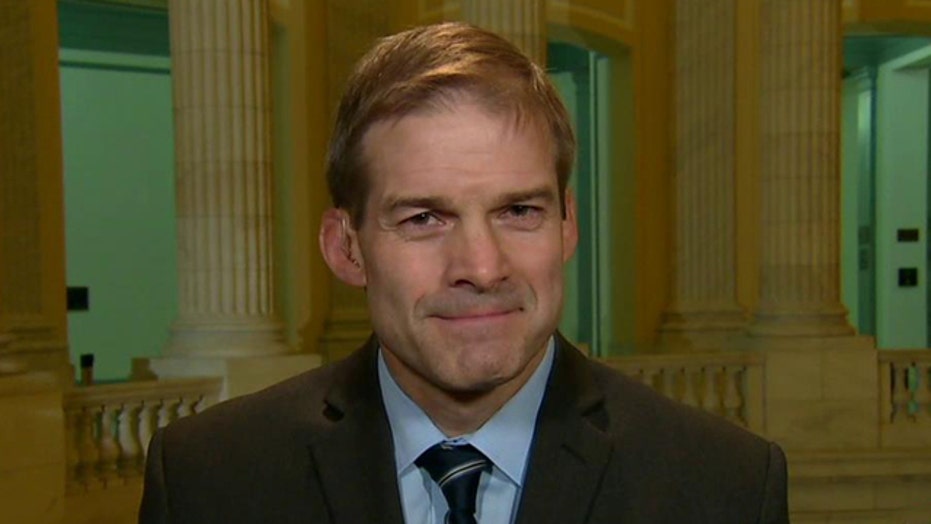 Rep. Jim Jordan on why Gruber should face Congress

This is a rush transcript from "Hannity," November 18, 2014. This copy may not be in its final form and may be updated.

SEAN HANNITY, HOST: Welcome back to “Hannity.” So after having no trouble at all repeated calling you, the American voter, stupid for believing the lies told by the Democrats in order to sell the president's disaster health care law, ObamaCare architect Jonathan Gruber appears to be clamming up. Now, just yesterday our friend, David Webb confronted the MIT economist, but he refused to comment. So is it time for Gruber to be brought to Capitol Hill, answer questions, he was paid by us, under oath? Here to tell us whether or not that's going to happen is from the House oversight committee we have Ohio Congressman Jim Jordan. We paid him, right?

REP. JIM JORDAN, R-OHIO: We sure did. He used taxpayer money to lie to taxpayers and then when it was all over he made fun of them. So of course he needs to come before a Congressional committee and answer our tough questions about what he did where all the money went, and what he was up to. So let's hope that happens. I think there is a timing to it, but let's hope it happens. I think it will.

HANNITY: If this is true that this was sold to us as a mountain of lies and a great manipulation of the CBO, as they say, and torturous language to get by that and we had to not tell the American people it was a transfer of wealth from the health and rich to the sick, elderly, and uninsured, what could be done about it, anything?

JORDAN: You use the term "if," Sean. It's not if. You think about the false statements the administration makes.

JORDAN: I'm just making a point. If you like your plan you can keep it, you like your doctor you can keep it, website is going to work, website is secure, premiums are going to go down. I mean, all the misinformation we got from these guys, so of course this just adds to our case that this is a bad law. It needs to be repealed we need to start over and put in place a system and model that works.

HANNITY: But we know the president is going to veto any action that way. I think you should pass that bill when the new Congress comes in in January. I assume the president vetoes. I assume you guys go back piecemeal. But don't you have authority to defund this?

JORDAN: Sure do. And we should look at that as well. But the first thing is put something on the president's desk. Think about it. For the last several years the president had been able to hide behind Harry Reid. Now you put legislation on his desk, and he's got to answer directly to the American why he'll either veto it or why he won't sign it. So put it on his desk. That puts the burden more on the president and, more importantly, begins to frame up to give context to the 2016 presidential race, because ultimately to get rid of ObamaCare completely we're going to need a new president, we all understand that. But you begin to frame that up by putting things on his desk.

HANNITY: Can I ask why? In other words, if Congress has the power of the purse, why can't you defund it?

that the legislative branch of the Congress has, so we should look at using that.

HANNITY: All right, let me go to an Obama adviser. It is kind of comical, because they all praised Gruber. They all cited Gruber. He was the go to guy. He was at the White House 19 times, four hour meetings with the president. Now nobody remembers him, never heard of him before, which is pretty funny. But one honest guy, Steve Rattner actually said he was the man behind ObamaCare. Listen to this.

STEVEN RATTNER, FINANCIER: If you go back and look at The Washington Post or The New York Times or anything from that period, you'll find Jonathan Gruber's name all over it as someone who is a leading expert on health care quoted by everybody, as someone who the White House was using. I don't think we know dollar numbers he was paid at the time, but he was certainly -- I remember that when I was in the White House he was certainly viewed as an important figure in helping to put ObamaCare together. And so it's exactly what you said. The problem is not that Gruber helped them put ObamaCare together because he was the man. The problem is what he said in the last two weeks and how the White House has handled it.

HANNITY: He was the man.

HANNITY: Congressman, Republicans need to have a backbone. You have the power of the purse. I hope you guys use it. The days and weeks ahead are going to be very interesting. We're going to learn about where the Republicans are going to stand.