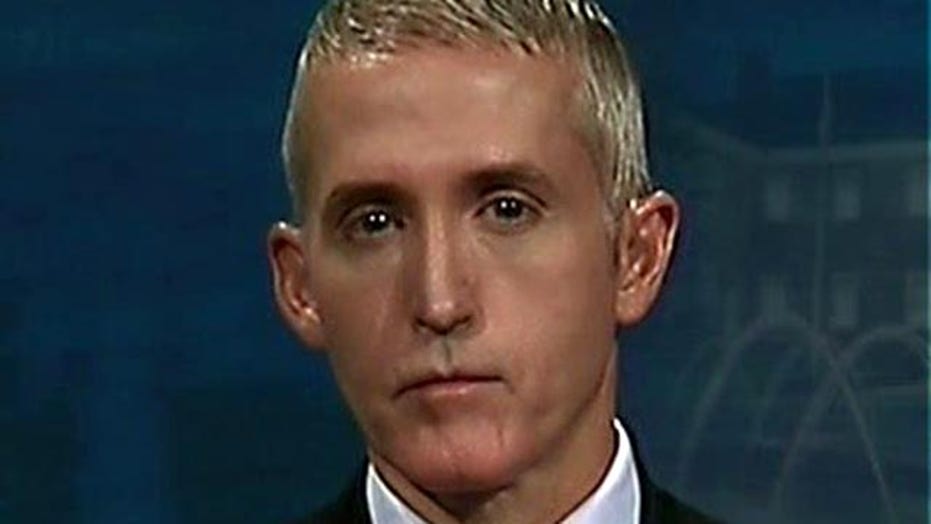 Rep. Gowdy: Paper applications for ObamaCare are a 'facade'

Congressman on additional documents released about the reform law

This is a rush transcript from "The Kelly File," November 4, 2013. This copy may not be in its final form and may be updated.

MEGYN KELLY, HOST: Also breaking tonight, the House Oversight Committee releasing more bombshell ObamaCare documents revealing that as the president was encouraging people to go over the phone or to use old-fashioned paper forms to search the exchanges and buy one of his new plans, the administration knew that those phone lines and applications would move no more quickly than the broken website because they had to go through the website anyway.

In fact, we're seeing meeting note that say, quote, "The paper applications allow people to feel like they are moving forward in this process [and provides another option but] at the end of the day we are all stuck in the same queue."

Watch what happens when the White House was pressed on that issue today.

JAY CARNEY, WHITE HOUSE PRESS SECRETARY: Jon, I get it. But the person who calls isn't the one who continues to wait after the paper application is filled.

JONATHAN KARL, ABC NEWS CHIEF WHITE HOUSE CORRESPONDENT: Your mocking is entertaining but the president said that you get a reply within 25 minutes. That was not true!

CARNEY: I think everybody else is looking quizzically because there is a reason to be quizzical here. You call up, you give your information, you get your questions answered that you need answered. And then they take over from there and then you find out, you know, what you are eligible for and the process goes forward.

KELLY: Joining me now, Republican South Carolina Congressman Trey Gowdy, he's a member of the committee uncovering all of these documents. And they have subpoenaed Secretary Kathleen Sebelius for more.

Congressman, good to see you tonight. And so, as the president was out there repeatedly with the 1-800 number, he knew, he knew that that basically was just another way of sending people to the website ultimately.

REP. TREY GOWDY, R-S.C.: It's a facade. It's one of several facades, Megyn. And, you know, the president already has a Nobel Prize for peace. I think he's shooting for one in fiction. To send people to the mail instead of the website when you know that you are going in exactly the same queue, is a facade, is a Potemkin village that is calculated to mislead folks and create this appearance that everything is going swimmingly when you know otherwise.

KELLY: Why can't there just be honesty? I mean, we just picked this up with Marc Thiessen. Why can't he just come out and say, "I didn't tell you the truth or broke a promise." However he wants to phrase it. "I broke a critical promise and millions of American are hurting now tonight because of it. And this is what I'm going to do about it."

We don't have that. We have, what I said -- this is what he said. "What we have said was if you had a policy that didn't change." That's not what he said. And now the thing about, oh, you can just call 1-800 number. Well, that just directs people back to the website.

GOWDY: I could have sworn he said "period" at the end of that statement and now he's added a rather lengthy footnote. The answer to your question, Megyn, is, I have never understood why politicians don't look at their fellow citizens and say, "I made a mistake, I need you to forgive me and it won't happen again."

You know, Congress does not enjoy a very good approval rating. But nobody in government does. And part for the reason for that is instead of saying, "We made a mistake," even, "We made an intentional misstatement, we need you to forgive us," the response is to evade and to answer questions falsely. And then the worst of all is to assume that the American people are stupid enough to believe the explanation that he come with today.

KELLY: I always say, I can never understand these politicians who forget about the magic if videotape where we have it all on camera. I mean, we know what was said.

Congressman, we'll watch to see what, if anything, you guys get back from Secretary Sebelius. I know you have a subpoena waiting and you continue to get more documents by the day. Thank you, sir.