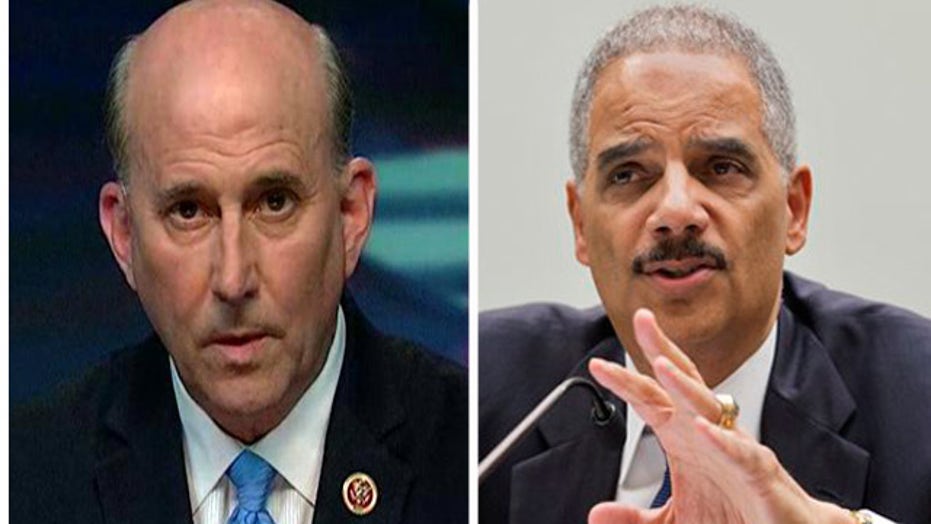 This is a rush transcript from "The Kelly File," April 10, 2014. This copy may not be in its final form and may be updated.

MEGYN KELLY, HOST: Attorney General Eric Holder accused of playing the race card this week after Congressman Louie Gohmert suggested in the hearing that Mr. Holder doesn't care about being held in contempt of Congress.

LOUIE GOHMERT, R-TEXAS, HOUSE JUDICIARY COMMITTEE: It is important that we have proper oversight so --

GOHMERT: I don't want to go there?

GOHMERT: About the contempt?

HOLDER: You should not assume that, that is not a big deal to me.

KELLY: The very next day, Mr. Holder went off script at an event for Al Sharpton's National Action Network, accusing the congressman and other critics of quote, "unwarranted and ugly attacks" not just on Mr. Holder but also the president.

HOLDER: The last five years have been defined by significant strides and by lasting reforms even in the face, even in the face of unprecedented, unwarranted, ugly and divisive adversity. Look at the way the attorney general of the United States was treated yesterday by a House Committee. Had nothing to do with me. Forget that. What attorney general has ever had to deal with that kind of treatment?

What president has ever had to deal with that kind of treatment?

GOHMERT: Well, Megyn, we have been trying -- I have been trying for over three years to get the documents from the Holy Land Foundation trial here in Dallas, it was the largest funding trial of terrorism the country has seen, and there were over 100 counts by which the defendants were found guilty, as you mentioned -- gosh you do your homework. I would love to have seen you try a case in front of me as a judge. But you know the facts.

So, anyway, apparently the evidence is profound and we have been trying to get that evidence from Eric Holder. Now, when he says that they -- he's been so mistreated, he does not have evidence. As a judge and a chief justice, I look for evidence. He has none because maybe he was too busy see helping Mark Rich get a pardon, maybe he's do involved getting terrorist help legally, but -- maybe he didn't notice. Alberto Gonzalez, Bush's appointment, was brutalized by Democrats in the Senate and the House. John Ashcroft was brutalized, Ed Meese brutalized, John Mitchell may have deserved what he got but he sure got a lot worse treatment than this attorney general. So he makes these assertions like some lawyers do in opening statements, but then the trouble is, when it comes to putting on evidence, he has none.

KELLY: Do you think he played the race card?

GOHMERT: He didn't say race, and he was very careful about that, and it doesn't matter to me. I can careless. I want to get to the bottom of it, and so that you and everybody else in the country can know exactly what CARE is, exactly what ISNA is. We are entitled in Congress to see the evidence that his Justice Department turned over to the defendants that were convicted of terrorism.

GOHMERT: Listen, I've been asking for this for three years and when I send another letter again last June and they wait until this year to respond --

KELLY: You know, what? I apologize to have to interrupt you but we're having a hard break in five seconds. So, my apologies for that and thank you for being here.

GOHMERT: All right. Thank you for having me on. And thanks for your homework, Megyn.