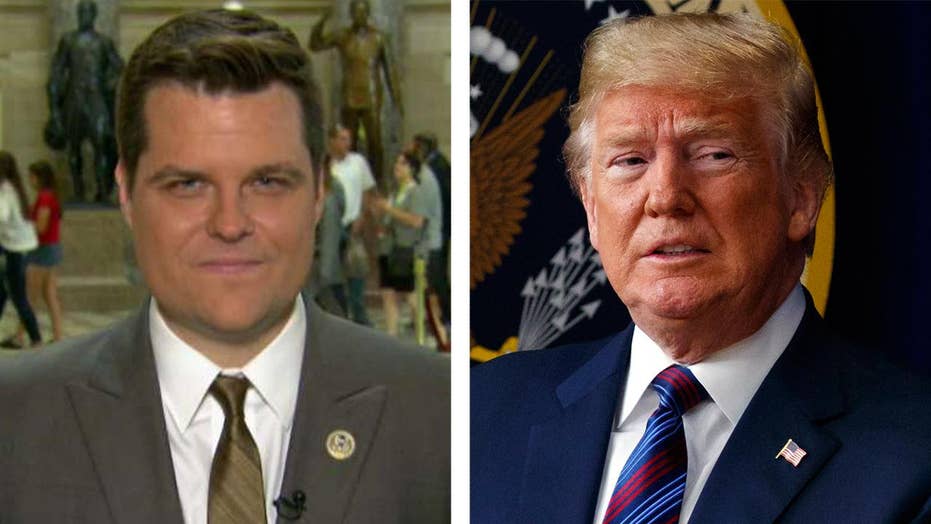 Rep. Gaetz: Unwise for President Trump to pardon himself now

House Judiciary Committee Member and Florida congressman Matt Gaetz joins 'Your World' to weigh in on the Russia probe and President Trump's tweet asserting his power to pardon himself.

This is a rush transcript from "Your World," June 4, 2018. This copy may not be in its final form and may be updated.

SARAH HUCKABEE SANDERS, WHITE HOUSE PRESS SECRETARY: Thankfully, the all hasn't done anything wrong and wouldn`t have any need for a pardon.

QUESTION: But does he absolutely rule out doing that? I mean, does he rule out ever issuing a pardon for himself?

HUCKABEE SANDERS: Once again, thankfully, the president hasn't done anything wrong, and therefore wouldn't need one.

NEIL CAVUTO, HOST: All right, so the president says he can pardon himself, it would not be necessary, but he has that ability.

Other legal scholars disagree on this or the degree to which the president could even entertain this.

Let's get the read from Florida Congressman Matt Gaetz.

Is it your impression that the president of the United States can pardon himself?

REP. MATT GAETZ, R—FLA.: Well, I think that the only folks contemplating the president pardoning himself are in the media, not in the White House, not in the Congress.

I agree with Mayor Giuliani that there would be real challenges if the president were to do such a thing.

But here is the reason, Neil, why I think that Sarah is not eager to completely rule out the potential. If there was aggressive prosecutorial misconduct, if there were circumstances that were just totally unreasonable, where the president was treated unfairly, the balance of power, the checks and balances contemplated in our Constitution, give the president unfettered pardon power for a reason.

CAVUTO: The reason why I mention it is because he did, sir. So, it's not the media.

He did raise it. The president raised it. And his lawyer first initially raised it.

So you think that there's a way he could do that?

GAETZ: Well, I don't think that that is seriously being contemplated. I believe that 20-page memo you're referencing really -- really talks about that.

GAETZ: No. Well, I think that it talks about the specter of presidential power more in the sense of his ability to oversee an investigation.

But, again, I don't think it would be wise for the president to pardon himself under the current fact pattern. But, remember, the fact pattern can change.

GAETZ: And if it does, I think it's important to ensure that we don't anything to erode Article 2 of the Constitution.

CAVUTO: All right, so, when someone like Chris Christie comes along and says over the weekend that that would -- that would probably likely get the president impeached if he tried a maneuver like that, you disagree with that?

GAETZ: No, I agree that, given the current fact pattern, it would be unwise and politically disadvantageous for the president to pardon himself.

I just think the reason that you haven't heard a black-and-white answer absolutely ruling it out from the press secretary is that facts may change, circumstances may change.

Look, we can't even in Congress get the documents that show us the basis for this investigation. What if we find out that the basis was entirely rotten, that there was no real Papadopoulos admission to this effect, and that Mr. Downer, who had financial dealings with the Clinton Foundation and who has been proven to say things that were not true about affiliations with the Australian Embassy and the United States, like, what if that was all a lie?

I think that, as we learn more, we will be able to better illuminate what the president's options are. But I agree with Mr. Christie that right now he shouldn`t pardon himself.

CAVUTO: Do you think that inconsistent stories -- and it might be just forgetting stuff in the past, Congressman.

I know you were busy doing your job to hear everything that came out of the Sarah Sanders press conference, but we are getting different stories as to that Donald Trump Jr. meeting, one that first apparently talked about adoption issues with the Russians, and now we're told the president was dictating points to his own son.

I`m just wondering whether you're confused, as many are, and certainly in that room about what really happened.

GAETZ: Well, I wasn't in the room. And so I don't know what happened.

I do believe that it's very frequent that officials from foreign governments will meet with members of Congress. They will meet with folks associated with campaigns. That's not aberrational here in Washington.

I do think that we have got to have a clear accounting of what occurred in that discussion. But my sense is that there was nothing nefarious. There was no agreement to engage in any unified or colluding behavior.

It was merely a briefing that seemed to end with the president and his team not wanting to work further with these particular individuals.

And people are beginning to say, at you first said you knew nothing about what transpired at that meeting, Mr. President, or offered your son any advice or talked to him at all regarding the meeting, and then, later, lo and behold, two lawyers that he was offering talking points.

Do you see where some people are looking at this saying, you know, I don't know? It just doesn't all add up.

GAETZ: Well, I have heard your commentary on that, Neil.

But, for me, where someone weighing in on a statement and dictating a statement begins and ends is a continuum that is not really relevant to whether or not there was collusion with Russia, where we haven't seen any evidence.

CAVUTO: No, I`m not saying there`s collusion with Russia, but if you said you didn't -- you didn't...

GAETZ: Well, I -- I recall Sarah Sanders saying at the outset that the president did weigh in.

So, whether someone weighed in or dictated...

GAETZ: It sort of seems like a flimsy distinction, maybe a distinction without a difference to me.

I wish we had more time. Thank, sir.