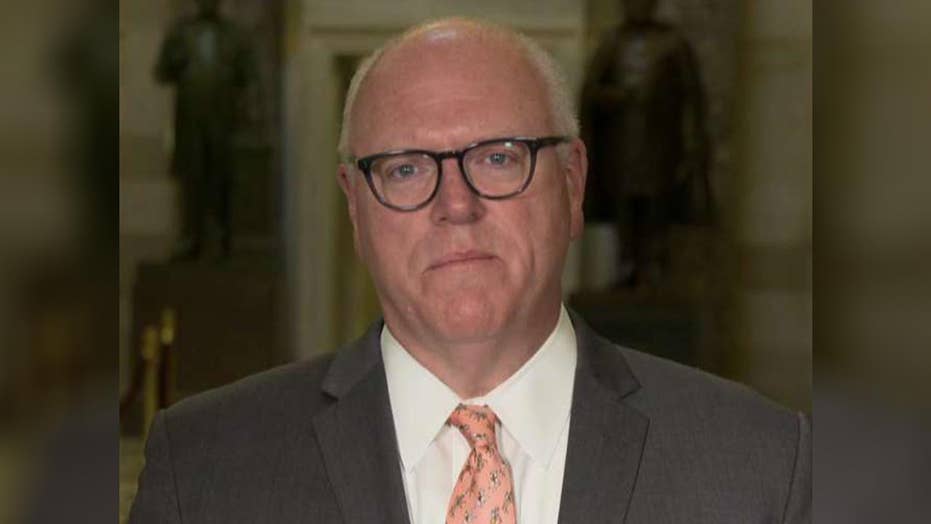 Rep. Crowley: Republicans bankrupt when it comes to ideas

NEIL CAVUTO, HOST: All right, the president just wrapping up a meeting with those opposed in California to this sanctuary state law that is in effect right now, but going one step further, the president saying that he recommends looking into obstruction of justice charges against the mayor of Oakland, California. Remember, she was famous for saying that she would give a heads-up to illegals in her community if ICE agents were showing up. "To me" -- quoting the president here -- "that is obstruction of justice, and perhaps the Department of Justice can look into that. "The read now from acting ICE Director Thomas Homan. Director, good to have you back. What do you think of that?

THOMAS HOMAN, ACTING U.S. IMMIGRATION AND CUSTOMS ENFORCEMENT DIRECTOR: Well, you know, the mayor, what she did was wrong. She gave a heads-up. We actually had over 1,000 targets for that operation that we planned for months, many of them criminals, most of them criminals.
And to go on TV and give a heads-up to criminals that law enforcement is coming within 24 hours, that is certainly -- I don`t know how many. I can`t put ever a number on it, but certainly many criminals, we were not able to apprehend because they were given a heads-up. And it certainly put my officers at an extreme risk. When you let a bad guy knows that the police are coming, that`s never good.

CAVUTO: Yes, they were on the lookout for you. In the meantime, you have led an effort to sort of boost work site enforcement investigations, double where than where they had been before, to make sure that businesses aren`t taking advantage of this. Can you tell me the latest on that?

HOMAN: Well, we have already almost tripled the work site investigations we have opened up this year under President Trump. It`s always -- you know, work site -- getting a job in the country illegally is a magnet. It`s a magnet for further illegal immigration. So, we want to take that magnet away. And employers are not giving illegal aliens a job out of the kindness of their heart. They`re paying them less wages. They`re taking advantage of them. It gives an unfair competition to other competitors who want to follow the law and follow the rules. So we`re taking this seriously, and we`re hoping to remove a magnet that entices further illegal entry. If they can get a job here, that`s another reason why they will come. And we have just got to take that magnet away.

CAVUTO: As the president pointed out, and you have raised with me in the past, Director, our -- it`s our strong economy that acts as a beacon for folks who don`t have that here. Now, in the latest case of the caravan, those folks weren`t from Mexico. Most came from south of the Mexican border. Honduras was a favorite spot. And many were granted asylum.But, in the meantime, there`s been a dust-up. Who holds these people when that process is ongoing? Who is responsible?

HOMAN: Well, first of all, when they enter the country, if they enter illegally, they are going to be prosecuted for illegal entry. And that has made the news the last couple days about separating families.
But every law enforcement agency in this country, when you arrest a parent, you go and separate that family. It`s unfortunate. That`s just enforcing the law. But for those who come to a port of entry and claim fear, if they get a credible fear finding from Citizenship and Immigration Services, which happens about 85 percent of the time, then they have got to wait to see a judge. So, we will hold them, except, if they`re a family unit, then we have limitations through the Ninth Circuit. We can only hold them for a certain period of time. But let`s be clear. Now, even though they may get 80 to 85 percent approval from their initial interview, when they go in front of an immigration judge, if they show up in front of an immigration judge, less than 20 percent actually get a credible fear finding, which, again, it`s a loophole in the system. It`s an issue we have asked Congress to address. If they want things like this to stop happening, Congress needs to take this seriously and address the loopholes that we have brought to their attention.

CAVUTO: It makes you wonder whether they want to address those loopholes.

HOMAN: Well, they are certain on notice. I have been up on the Hill many times. We have identified the loopholes on asylum claims, the Florida settlement agreement, how long we hold a family in detention. There`s certain things Congress can do, if it`s in their purview, to fix the system. Look, under this president, we had a 45-year low of illegal immigration last year. That is not a coincidence. That shows that enforcing the law, having consequences and deterrence to illegal activity has an effect. However, these criminal organizations that smuggle aliens have found loopholes. Now it`s up to Congress to close these loopholes and gain control of this border.

CAVUTO: Still, you mentioned the president. He was frustrated, we`re told, at a Cabinet meeting a couple of weeks ago, sir, with Homeland Security, Nielsen, and apparently berated or at least was publicly angry about the uptick in illegal immigrants getting into this country. Reports also were that she threatened to quit over that. I don`t know what the truth is. I`m not trying to rehash that. But is it your sense that the president is at wits` end with this?

HOMAN: I mean, Secretary Nielsen is a good secretary. She supports law enforcement. She supports the rule of law. She has the back for our Border Patrol agents and ICE officers who are out there putting their lives on the line every day. This is really a problem for Congress to address. We have identified the loopholes that causes illegal immigration. And we need Congress to act. And if we can get them to act, we can finally once and for all control this border. A 45-year low, four-decade low is not a coincidence. We have shown we have the knowledge and the capabilities to fix it. We just need Congress to have the same motivation to fix the loopholes, so we can finally seal the border and allow legal immigration to come -- I have said that many times, Neil. I can`t blame anybody for wanting to be part of the greatest country on Earth. But there`s a right way and wrong way to do it. You can`t not want to be part of the greatest country on Earth and not respect its laws. You can`t do that under this president, and I fully support that.

Director Homan, always good seeing you. Thank you very much for taking the time.

<Copy: Content and Programming Copyright 2018 Fox News Network, Inc. Copyright CQ-2018 ASC Services II Media, LLC. All materials herein are protected by United States copyright law and may not be reproduced, distributed, transmitted, displayed, published or broadcast without the prior written permission of ASC Services II Media, LLC. You may not alter or remove any trademark, copyright or other notice from copies of the content.>