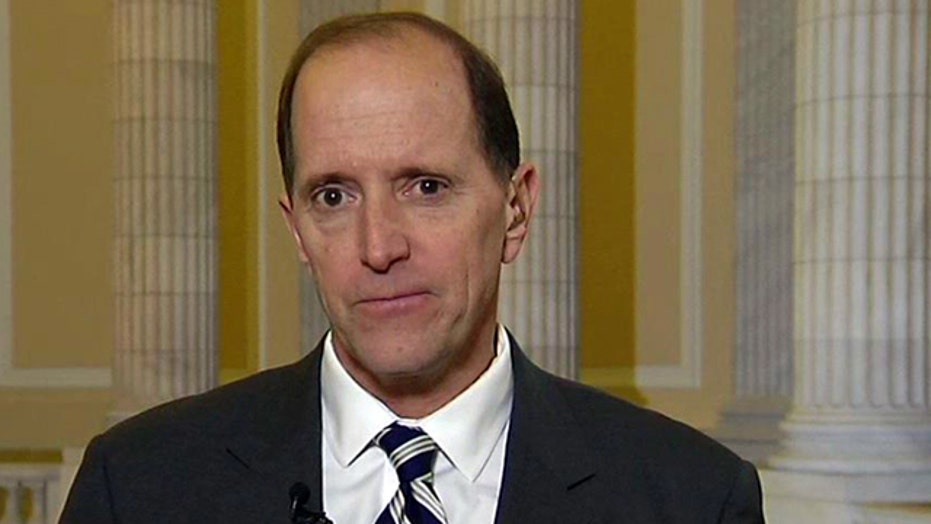 This is a rush transcript from "The Kelly File," February 11, 2014. This copy may not be in its final form and may be updated.

MEGYN KELLY, HOST: New attempts tonight to push back against the IRS, as it stands ready to crack down on conservative groups yet again. The IRS claims it is simply narrowing the scope of what these groups can do simply for purely innocent reasons, but our next guest says this is really an attempt to remove conservative groups from the public square all together. Congressman Dave Camp is the Chairman of the House Ways and Means Committee. He's with me now. Congressman, good to see you.

And so, what we have here is the IRS saying sorry about all that stuff we did before, but we've got the perfect solution. We'll just shut down these conservative groups and other groups, even though it's largely conservatives, who are at issue. From engaging in certain voter registration activity right before elections, and that is the solution to all that problematic behavior we engaged in over the past couple years. And you say what?

REP. DAVE CAMP, CHAIRMAN OF THE HOUSE WAYS MEANS COMMITTEE: Well, today in the committee we passed a bill that would just delay this proposed rule for a year. Get it outside in election, delay it for a year -- let us complete our investigation. I don't even have all of Lois Lerner's e-mails yet. The taxpayer inspector general has not completed his investigation of this matter, so to pick out what we call the social welfare groups or the 501(c)(4)'s, and target them is really just putting into a rule that targeting that -- that we found out about months ago. And look, they don't do anything about unions. They don't do anything about chambers of commerce. They don't do anything about charitable groups but they go after these social welfare groups and say you can no longer engage in nonpartisan, bipartisan, get out the vote, voter registration, voter education, and that's just wrong. So, we need to delay this for a year.

CAMP: Right. The rule says nothing about unions. Unions can go forward. They can do all their get out to vote, all the voter registration, but these groups that have been targeted already. I mean, to me, this adds insult to injury. They have been targeted already and now they're going to put them out of business. So, we need to delay this, the committee voted to delay it. Hopefully, the House will take it up very soon.

KELLY: Now, they come out and say, look, the only reason we're doing this is because we were so confused. That's the only reason we "targeted conservatives in the past couple years in terms of their -- when they applied for tax exempt status and all those questionnaires, when we kept the applications pending for months and years in some cases." We were just confused about whether these were political entities or nonpolitical entities. So, we're going to pass this new rule that just says whatever kind of entity you are, you can't do this stuff right before the election. You say that's bull and that you have evidence that they've been laying the foundation for this crackdown on conservatives for years?

CAMP: We have gotten some e-mails, one of the e-mails from Lois Lerner indicates this is going to be "offline," meaning not to public view. So, they have been working on this for years, so to say this is in response to some confusion is just wrong. It's not the case, and really there was no confusion. I mean, this has been the settled law for 50 years. The groups knew what they were doing. This really was brought to the attention of Washington officials and the IRS because of media attention, not because of confusion. The rules are clear and the groups were following the rules.

KELLY: So, in other words, the crackdown on the -- on the influx, the sudden spike in conservative groups applying for tax exempt status. The crackdown on them only began once you had media attention on how many groups were applying and Senator Chuck Schumer and others who were saying, the IRS needs to do something about these groups. And suddenly, there was confusion at the IRS about them.

Let me ask you about this e-mail because I think it's very interesting that you uncovered, Lois Lerner who pleaded the fifth, who would not answer questions before Congress and will not give you her documents. Was this top IRS official is at the center of the scandal? She's now, you know, suddenly retired on the taxpayer's dime. She was on the receiving end of an e-mail from someone at Treasury that you uncovered in your committee, that says this is to Lois, the person says, "Hey, I don't know who in your organization at the IRS is keeping tabs on C4s," that's these groups, "but since we mentioned potentially addressing them off-plan in 2013, I've got my radar up and this seems interesting." She sends an e-mail that talks all about a legal justification for going after such groups, how you can bury them in paperwork, and you get all sorts of questions that you demand answers for from these groups. What does this mean that this treasury person is saying to Lois Lerner at the center of the IRS, let's come up with this plan off-plan. Is that just offline? What does it mean?

CAMP: Off-plan means not in the public view, not this close on the public agenda. So, it means in secret. And it's very concerning. That's why we need all of the e-mails. We need to get to the bottom of this, we don't have them and we need to get them, and hopefully, that the IRS will cooperate. But what this means is treasury was involved as well. It's not just in the IRS, and this also means it's centered in Washington.

Look, this didn't start in Cincinnati. This wasn't based by a few rogue folks, and -- and this is actually more widespread than what's first reported. A hundred percent of the groups that were audited were conservative groups -- 100 percent. So, look, this is bad from the get go, and the fact that they're trying to put it into rule before this is even really fully uncovered is just wrong.

KELLY: Congressman Dave Camp, Mr. Chairman, good to see you. Thank you so much.

KELLY: New fallout tonight in the Benghazi terror attack. What they found in a scathing new report and who it points the blame at. Next.