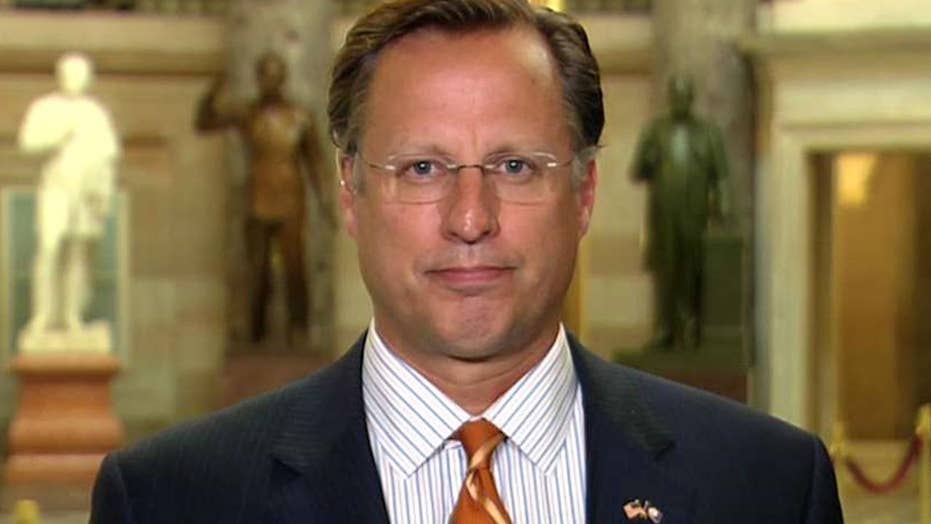 On 'Your World,' congressman says House Budget Committee does not know what tax reform will look like yet

This is a rush transcript from "Your World," September 13, 2017. This copy may not be in its final form and may be updated.

NEIL CAVUTO, "YOUR WORLD" HOST: All right, a sweeping tax cut that even Democrats can love?

Well, we might get the first hints of that when the president sits down with Chuck Schumer and Nancy Pelosi for dinner at the White House tonight.

House Freedom Caucus member Virginia Congressman Dave Brat on the deal, or at least what we make of it right now or hear of it.

Congressman, what we hear -- and it's very good to have you, sir -- is that it will not include a tax cut for the wealthy most likely.

CAVUTO: How do you feel about that?

BRAT: I actually wish I knew about that deal.

And that's precisely the problem. I'm on the Budget Committee. And we don't know any details. It's not like we're missing some detail. We don't know anything that's going to be in the tax package yet.

One thing we do know, Mitch McConnell wrote a piece in Roll Call, headlined about a week ago, and said it looks like we're not going to get to tax reform until the beginning of next year, maybe with 60 votes.

So, that's the new news that I know. And so maybe that's why the president is reaching out to Democrats.

But that leaves us at a loss, because we don't know what target we're aiming at. We hope we're still aiming at the president's original tax plan, which, roughly speaking, had 15 percent corporate rate and then take care of S Corps, individuals, repatriation.

BRAT: And we hope that -- on the upper income side, I don't know the details. Maybe he's in a little talks and negotiation there with Democrats.

But the breaking news is, again, after the face-plant on Obamacare, the Republicans don't have 51 votes in the Senate. It will be very hard to pick up a few Democrats for reconciliation, right, to vote with only Republicans.

CAVUTO: So, this event sticks in your craw a little bit. I understand where you're coming from.

CAVUTO: But maybe the president was doing the math and thinking of the health care thing and thinking this will almost assuredly get me Democratic votes, maybe put me appreciably over 60 votes in the Senate. And I don't have to worry about satisfying guys like Dave Brat.

CAVUTO: What do you think?

BRAT: It's about the country. And it's about our economic growth rate.

CAVUTO: but it is about the plan that you guys are coming up with, not you individually, sir, but Kevin Brady in the House Ways and Means, that included across-the-board cuts, including taking the top rate down from 39.6 to 35 percent.

CAVUTO: I believe that had gotten so far to the leadership in both houses. And now that is left out.

BRAT: If that's part of a compromise to get tax reform through, I can compromise.

But I will tell you where I can't compromise is on the corporate rate and the S Corp. The Democrats like jobs, but when it comes to tax policy, they don't like employers. And they don't seem to see that you have to incentivize the supply side, the business creators, businesses, in order to get productivity growth and raise wage rates.

CAVUTO: So, corporate tax rates, even if you brought down to 15 percent right now, but I think I know what you're intimating there, that small businesses generally pay at the individual rate. Their rate would still stay high, I guess, by that definition. And so they're not getting a break by your math. Right?

And so all that weighs in. The key is economic growth. Right? That's why we're doing tax cuts, is to get the economy primed again. If you grow at 3 percent, it helps on the debt, it helps take away all this political anxiety. It solves every problem, gets you health care, gets you income in your pocket.

That's what we have to get at. It can't become political. It can't just become, we're going to appease different groups and piece together a piecemeal. That will not result in economic growth.

CAVUTO: But it might result in a deal and it might not be the deal that you wanted. And it might just reflect the president's frustration with dealing with you and your colleagues.

Is this, I don't know, a sort of stick it to them to Republicans?

BRAT: Well, I think the president is rightly upset with the product coming out of the Senate. Right?

We did a -- they did a face-plant on a skinny bill. It wasn't even policy. They couldn't even get a vote through on...

CAVUTO: But remember what he said your plan, that it was mean as well.

BRAT: Yes, I know. That wasn't helpful either.

But, hopefully, on this one, he wants to go big. He has always said from the beginning go big. So if we have to make a little wrinkle at the top adjustment, we will see how that goes. But I hope he's still going big.

And he has got to send us the target to aim for. We want to get this through for him. We're all on his side. We want President Trump's tax plan that he ran on. We had Steve Moore was over here today and a bunch of the other tax experts.

CAVUTO: I don't think they anticipated a lot of this. A lot of those guys did.

CAVUTO: And I'm just wondering now if you feel or there's a frustration among some of the conservatives because the president might be saying, well, where else are these guys going to go?

Yes, I don't think he's going that far. He's just saying, look, I'm going to cover my bases and try to get some Democrat votes too.

That's the way I see it.

But we will see if he can get up to that 60 threshold. That will be tough, because it also assumes you're going to have 52 Republicans. And I don't know if he's got them. And so it all depends on what is in the package. And that's what we're obviously dying to see.

CAVUTO: He might not need the 52 Republicans. At this point, he could easily get 15 to 20 Democrats. Right?

And just as a detail for the wonks out there, right, our Republican package was scored to be revenue-neutral. That sounds boring. But we don't have money built into our tax package, our budget resolution package, to provide for major league tax cuts.

And so Steve Moore and some of the president's team, they're encouraging us to take a look at that to make sure, right, because we lost the border adjustable piece as a pay-for.

So, now to get the rates down to a point where we are going to generate economic growth, we have got some heavy lifting to do in the next few weeks.

CAVUTO: All right, and not a lot of time, to your point, to do it.

Dave Brat, thank you, my friend. Very good seeing you.

BRAT: You bet. Thanks, Neil.