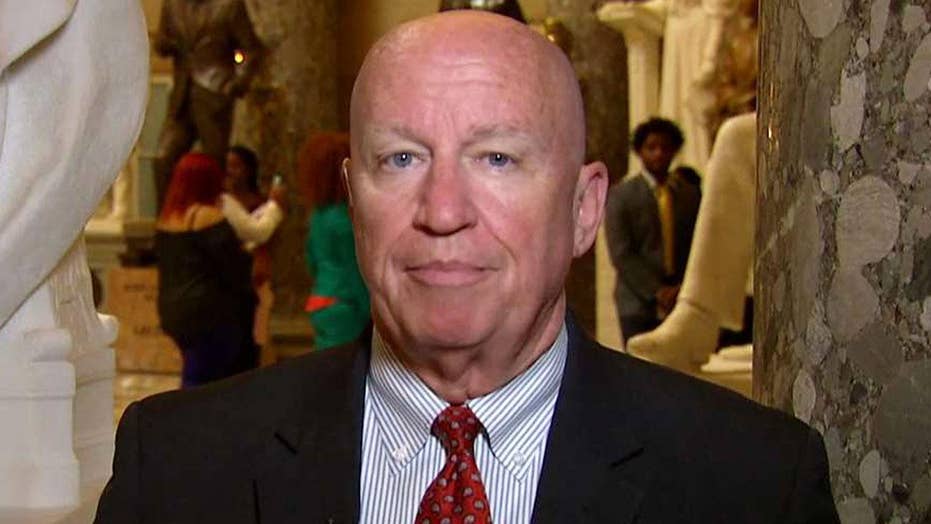 Rep. Brady on tax reform: We're sticking to the timetable

House Ways and Means Committee chairman speaks out on 'Your World'

This is a rush transcript from "Your World," June 6, 2017. This copy may not be in its final form and may be updated.

NEIL CAVUTO, HOST: All right, I want to think of something.

Long before Donald Trump made it to the White House, long before a lot of people were even ironing out the possibility of a tax cut, this guy was working on it, House Ways and Means Chairman Kevin Brady, who joins us from the nation's capital.

Mr. Chairman, very good to have you.

CAVUTO: I know you're busy with a lot of meetings and powwows with all the White House biggies, Treasury Secretary Mnuchin, among others.

CAVUTO: Where does this stand, in your -- by your estimation?

We're just focused on getting it done this year. So, I think we're making good progress.

CAVUTO: All right, when you say this year -- and I always pester about this -- when?

At first, they were talking about maybe early summer. Now here we are, and then August. And then they said Labor Day. Where is it?

BRADY: Yes, so, I think everyone is focused on what month we might see a draft or a bill or when this process begins.

BRADY: But I really think the right focus is on what year. And it's got to be this year, 2017.

I think all the elements are in place to do it. I think the job creators in the country are hungry for this tax reform, and Americans are, too.

When you say this year, though, that it would happen this year, it would also be implemented this year?

CAVUTO: All right, would it be retroactive?

BRADY: So, depends on the timing of it.

I think, as much as we can make immediate, the most pro-growth provisions that we accelerate, the better for the economy. And I think one thing, too, you create the certainty of low rates, of a tax code designed that our businesses that compete and win anywhere in the world, and the idea that businesses can fully expense their business investment immediately, those are awfully pro-growth initiatives.

CAVUTO: Chairman, did you see -- and maybe you have -- The Wall Street Journal today, an editorial, criticizing the president for these distractions and tweets, not so much the tweets themselves, but when he goes off on a tangent on subjects that have nothing to do with what presumably the markets or investors or general average Americans would like, that is those tax cuts, the health care reform, et cetera, and faulting him for getting in the way of his own good ideas and by extension I guess yours.

BRADY: Well, look, this is a president who wants to speak directly to the American people. He knows how to do it. It is a bit unconventional, to say the least.

CAVUTO: But The Journal is saying, in speaking to the American people, sir, what he's doing is going outside issues that have nothing to do with the more important ones at hand, like what you're working on.

BRADY: Well, I think maybe that -- just taking that unconventional approach is what draw a lot of public support to him.

As for me and on tax reform, we're laser-focused on getting it done this year. The Trump team feels the same way, and the Senate as well. So, look, we're just going to stay the course, grind this out, work through the big problems, have a unified tax plan going forward.

CAVUTO: All right, so, Chairman, one of the things that this has number sort of hinged to is the health care reform effort.

Is it your understanding now, despite the differences in the Senate, and they're having a Herculean time just getting agreement on anything, that if they do get bogged down, you will move on to tax cuts?

BRADY: Well, I'm pretty optimistic that they will get the job done.

I know it's hard in the Senate. In my view, the House delivered them very a good product. We also delivered them more resources to improve upon it. So, look, I'm anxious for them to do their work, not just on health care, but getting those $1 trillion of tax hikes out of the economy.

That really clears the way and more importantly, I think, creates momentum for finishing tax reform as well. So, look, I just want them to keep doing their job. Let's deliver this to the president, and then, because we're running this parallel track on tax reform, that really frees up the field for us.

CAVUTO: Do you think that your colleagues can come to an agreement on whether these are all paid for?

There are some of the more moderate members who say they should be paid for. And that has been apparently more of a debate and a raging one in your party than was first thought to be the case?

BRADY: Well, yes, I think we can come together.

I think that gives us the model we want to go for. And, right now, especially since one of the big focuses on how do we vault ourselves back in that lead pack from our global competitors, we don't simply want to stop jobs from moving overseas. We want the business decisions to bring those supply chains back. Permanence is really key to that.

CAVUTO: All right, permanence would mean then beyond 10 years?

BRADY: Yes, that it's balanced within 10 years.

And, frankly, it's achievable. We just have to stay at the table, make sure it works.

Meanwhile, you have got a debt limit that you're running into. Treasury Secretary Mnuchin has said just raise it, don't attach any provisos to it or conditions for it.

How likely is that, do you think?

BRADY: Members are having discussions right now about that. Obviously, the timetable has moved up. Secretary Mnuchin said he wants this done before August.

So we're having discussions with our members. I'm one of these members of Congress who would like to see significant budget reforms that go along with debt ceiling, because, frankly, the budget rules we work under are all focused on , how you spend more and how do you create savings and efficiency with these...

CAVUTO: But he's saying don't get into that kind of stuff now, the secretary.

CAVUTO: So, are you of the opinion that you can go ahead raise it and address these issues later, or now is the time to do it?

BRADY: Well, look, we're going to listen to our members on how we get this done.

I'm just one of these people who believes, if we have an opportunity to change the way Washington spends and budgets in a way that works for taxpayers and solvency, let's look for those opportunities.

CAVUTO: do you think there will be a government shutdown?