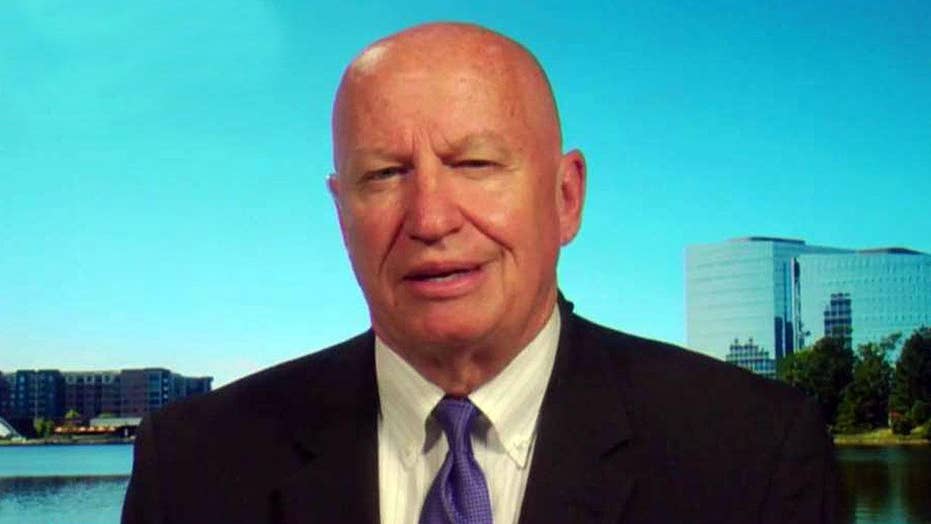 Rep. Brady on concerns deadline for tax reform is sliding

This is a rush transcript from "Your World," April 18, 2017. This copy may not be in its final form and may be updated.

NEIL CAVUTO, HOST: Well, if you're going to be pointing fingers, please do not point them at this guy, because long before Donald Trump became president, long before he was even a prospect for being the next president of the United States, this guy was toiling away well in the backrooms of some Capitol Hill building trying to put together a tax plan that made sense and would be comprehensive.

Chairman, very good to have you.

Now, I'm confused, sir, and not about what you're trying to do, but the mixed message I'm getting out of some of your colleagues, and, more to the point, those within the White House.

Treasury Secretary Mnuchin seems to indicate now that that August deadline has to be pushed back. Is it?

BRADY: So, I haven't talked to Secretary Mnuchin about the specific month of timing.

And, look, it's been generation since we fixed this broken tax code. We probably ought not be focused on the month, but the year that it happens, which is this year. We're certainly focused on that. I think sooner, no question, is better. We have an aggressive timetable now.

In fact, Ways and Means Committee will soon be announcing congressional hearings on our blueprint starting next week. And so, look, let's just plug away. Let's make this bold and pro-growth and comprehensive. And if it moves a little past August and still lands in this year, boy, it is going to be an incredible achievement.

CAVUTO: All right, what is a little past August?

BRADY: Well, again, I think focusing on the month is probably the wrong deal here, focusing to make sure this gets done in 2017.

BRADY: So, it depends.

I think, the later we go in the year, the more challenging that will be. I'm pretty confident that -- no, I'm awfully confident there are key elements of this tax code that will begin immediately as well. Those are the most pro-growth areas of it. But it depends on timing.

BRADY: We're going to try to make as much of it retroactive as possible. We're going for the growth. That's our top priority.

BRADY: So, I think, obviously, the rates are important. I think a full and immediate expensing is critical, the ability to bring back -- I think, tax relief for families in simplifying the code is also really stimulative, in the sense that the American public really is ready to bust out of this economy, as well as our businesses.

So I think all of those are critical.

CAVUTO: I just get a sense that whatever comes out might be in piecemeal fashion.

So, tell me where I'm wrong, that, for example, I have heard one theory has it that you come up with a corporate tax cut and then address individual rates later. Do you think that is what is going to happen?

BRADY: Well, I hope not.

One, there is growth on the family on the individual side as well. And, remember, that's what we're going for. And I think the American public, while you and I get pretty excited about getting this economy revved up, getting people back to work and vaulting back into the lead pack as the best place on the planet for new jobs, the American public today especially, on Tax Day, they want this to end.

They want this to be the last Tax Day they have to fool this with complex tax code. And so the thought of being able to file using a postcard-style system, where it's fair and simple, and we bust up the IRS as we're doing it, boy, that has got a great deal of support I think from the American public, and can help us move the tax cuts and reforms forward on the business side.

CAVUTO: Are you worried the White House doesn't share your exact same zeal on this? I'm not saying everyone at the White House, but the ones who are talking tax cuts, Gary Cohn of the National Economic Council, to a lesser degree Steve Mnuchin of Treasury -- I'm not minimizing his role, but He doesn't talk as broad and sweeping in nature of the tax cuts as you do.

BRADY: I think they understand we get once chance a generation to do this.

We can't shoot for the middle of the pack. We can't make a few tweaks and call it a day. And a rate cut alone would have worked in the 1980s. It doesn't in 2017, if we're going to be competitive for the long run against China, Europe, Canada, and Mexico.

And so, no, I think they get it in a big way. They're clearly working through many of the same issues, frankly, we have spent years working through. They have got the right to do that. But in my discussions with them, they seem to be, along with the president, absolutely committed to overall comprehensive tax reform.

CAVUTO: All right, what was the last time you spoke to anyone at the White House on this, either Mr. Cohn or the treasury secretary?

BRADY: So, that would be last week just before -- excuse me -- just before we left for the Easter break with Secretary Mnuchin. We have regular conversations on tax reform.

And I still think -- look, I think the sooner that the White House, the House and Senate get together on the same page on the major elements of tax reform, as we work forward on some of the other ones as well, I think the better it is.

CAVUTO: All right, what about a border tax?

BRADY: So, at the end of the day, I think the president's point about leveling the playing field, he wants to make sure that foreign products don't have a tax break over made in America products, that we're not forcing through our tax code companies to move overseas.

In fact, we want a level playing field, ending that made in America tax for their products overseas as well. So, I think our responsibility is to represent the president and Congress the smartest design to level that playing field, grow this economy, vault us in the lead.

We still got some work to do in that area. We're going awfully bold, as you know. And people have fair, legitimate questions about it. We're trying to address those in a positive way.

CAVUTO: All right, but on the border tax, I understand the White House isn't keen on it.

BRADY: Well, it depends who you talk to.

I think the president has made it clear he wants that level playing field.

BRADY: And that's what -- taxing everyone equally in the United States, whether it's a foreign product or a made in the America product, both are taxed at that equal low business rate, accomplishes that goal.

But it goes better farther beyond that. It makes sure that we have eliminated all the tax incentives to move companies overseas. In fact, it's created major incentives to bring those supply chains, those manufacturing jobs back to the U.S. I think that fits exactly with where the president wants to go. And it certainly fits to where my constituents want us to go.

CAVUTO: All right, Mr. Chairman, thank you very, very much.

CAVUTO: A lot of people are talking out of different ends of their mouth on this. But the chairman, to his credit, has been consistently plowing ahead with this, on the notion that he wants comprehensive, sweeping tax reform.