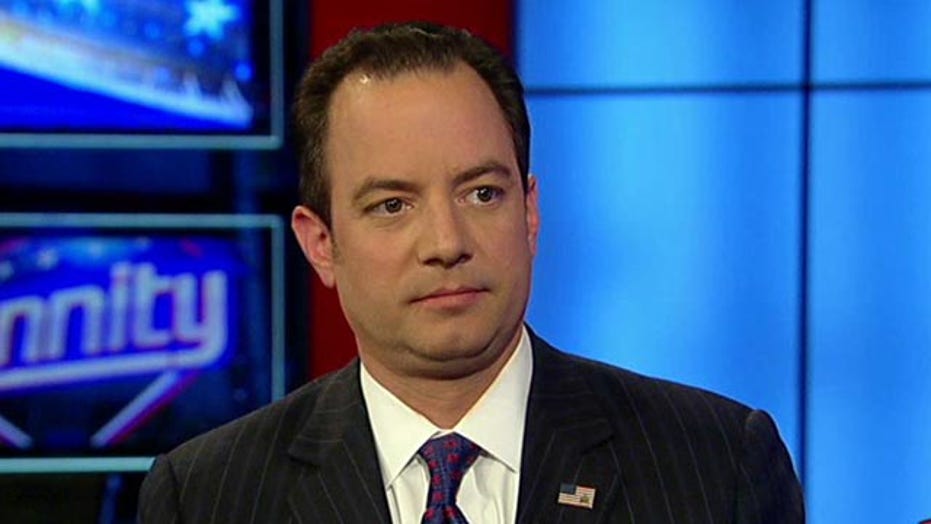 This is a rush transcript from "Hannity," November 4, 2013. This copy may not be in its final form and may be updated.

SEAN HANNITY, HOST: Welcome back to "Hannity." The left proves yet again what they're up to when their backs are against the wall. They'll say they'll do anything to try and win. The most recent example comes to us courtesy of, yes, your commander-in-chief. He was in Virginia yesterday, in the commonwealth, stumping for Democratic gubernatorial candidate Terry McAuliffe. He had some, well, unkind words for the Republican candidate Ken Cuccinelli and the entire Tea Party movement. Watch.

PRESIDENT BARACK OBAMA: You've seen an extreme faction of the Republican Party that has shown again and again and again that they're willing to hijack the entire party and the country and the economy and grind progress to an absolute halt if they don't get 100 percent of what they want.

HANNITY: Wait a minute. The guy that wouldn't negotiate? Now, isn't President Obama the one who said he was going to restore civility in American politics? Now, it appears just another broken campaign promise.

And also yesterday, a few states away, left-wing entertainer Harry Belafonte, he was campaigning for New York City Democratic mayoral candidate Bill De Blasio. And the liberal singer accused top GOP fundraisers of being part of the Ku Klux Klan. Watch this.

HARRY BELAFONTE, ENTERTAINER AND ACTIVIST: (INAUDIBLE) the heart and the thinking and the mind of those who would belong to the Ku Klux Klan. They are white supremacists.

The Koch brothers, that's their name.

HANNITY: And to make matters worse, De Blasio then arrived on stage, and instead of denouncing the despicable rhetoric you just heard, he praised Belafonte. Watch this.

BILL DE BLASIO, D-NEW YORK CITY MAYORAL CANDIDATE: When you listen to Harry, you're listening to the voice of a wisdom that's deeper than any wisdom we need in our day to day life.

HANNITY: Now, a few minutes later, De Blasio appeared to have a change of heart -- probably talked to one of his consultants -- and then denounced Belafonte's comments.

Joining me now with reaction, chairman of the RNC Reince Priebus is with us. How are you? Welcome to New York.

PRIEBUS: Good to be on.

PRIEBUS: Yes. Well, I mean, it's the culture that the president's cultivated here, I mean, a culture of dishonesty, a culture of hatred. And you know, look at the president's record. He was making promise every day on health care. We know what that's all about. You can keep your doctor -- turns out you can't. You can keep your insurance -- turns out you can't.

He is a person who is the master of talking and talking. And now you're looking at him throwing darts every which way to, I think, confuse the American people as to what's going on here in the White House.

HANNITY: He gives the same speech -- you know, Republicans want dirty air, water, hate Grandma, want to throw Grandma over the cliff, and -- and in this case, Cuccinelli -- he's a -- he's a Tea Partier, you know? But he didn't mention health care in that speech, did he?

But you know, I think that the president should take ownership not just of what he's said and what he's promised the American people on ObamaCare. But I think he should take ownership over this divisive culture that he has created, this KKK analogy you saw Trey (sic) Grayson roll out. And no Democrat is out there in any sort of organized fashion denouncing this. Now you got Harry Belafonte making the same allegation.

HANNITY: There seems to be a bit of -- well, not seems to be, there is a divide now, seems, between the Tea Party and some of the more establishment. It seemed to really come to a head with the government shutdown. And that is that -- I personally, and I think you were supportive of Ted Cruz and the effort of Mike Lee. And yet there were people like John McCain, "wacko-birds" and all the other comments by some other people.

What is your reaction to this intramural battle within your party?

PRIEBUS: Well, I mean, I spoke out about that, too. I mean, when Senator McCain mentioned -- or called some of these senators wacko-birds, I came out against that, as well.

And I think, ultimately, if you look at those issues, we are united. I mean, I really believe that. We had Ted Cruz and Rand Paul helping out the RNC raising funds just a couple weeks ago.

I mean, this is not a divided party. It is not the establishment versus the Tea Party. I mean, we were just with Ken Cuccinelli on Saturday. I just don't see that, Sean. And I know that's what people want to play up in the media. I think we're united. I just think we have to focus in on the things that bring us together.

HANNITY: The latest report that showed that this conservative group that helped elect Marco and Ted and Rand and Mike Lee -- that if they, in fact, are being used, that, apparently, the NRSC, I think it is, is going to cut off their funding to those -- to the companies that work with them. What's that all about?

PRIEBUS: Well, I mean, I think this -- I don't know if this particular group did a lot of work with the NRSC. But you know, look, I think that there is a little bit of blood boiling over the fact that Senate Conservatives Fund is spending more money attacking Republicans than going after Democrats. You know, it would be nice to see some of these groups spending more money in Virginia, helping out Ken Cuccinelli.

Different groups have different roles. And I think it's important for people to remember to, number one, stay in their lane and to do the best job that they can do for the organization that they represent.

HANNITY: I want to see a conservative coalition caucus, one that wants a balanced budget amendment, one that wants a full repeal of ObamaCare, you know, one that is really pushing and educating on energy independence in the country.

A lot of people call my radio show, "What is the Republican agenda?" I know you have solutions. I know that Paul Ryan's an ideas guy. I know that there are all of these things. Do you think maybe putting it all together, packaging it and selling it as, "We'll do these things if you put us in power in the Senate," is a good idea?

PRIEBUS: I totally agree with that. I mean, the "Contract With America" was brilliant. I think it was easy to understand. It was smart. We have to be the party that believes in unlimited opportunity for everyone, not just believe it, but go and sell it. What does growth and opportunity mean to people?

And that is something that I don't think we do enough of in our party, the branding and marketing of a party that believes in unlimited opportunity for every person in this country, is something we need to defend and promote.

PRIEBUS: ... in New York. But there are a lot of people that say, "Well, I'm not a Republican, I'm a conservative, I'm a libertarian, I'm a this, I'm a that." The problem is, the word under Scott Walker's name, Paul Ryan's name, Rand Paul's name -- the word under their name...

PRIEBUS: ... is Republican. And it has to mean something.

HANNITY: Do you think in Virginia, this libertarian candidate was pushed in part by the Democrats to hurt Cuccinelli?

PRIEBUS: Oh, I don't know. They have a -- you know, in Virginia, they have a real history of having a lot of these third party candidates on the ballot. We'll see if whether or not people actually show up in those regard. Most of the time on Election Day, that doesn't happen. It dips down to two or three percent. It could make a difference tomorrow.

HANNITY: We'll see. All right, good to see you, Reince.

HANNITY: Appreciate it. Thank you very much.