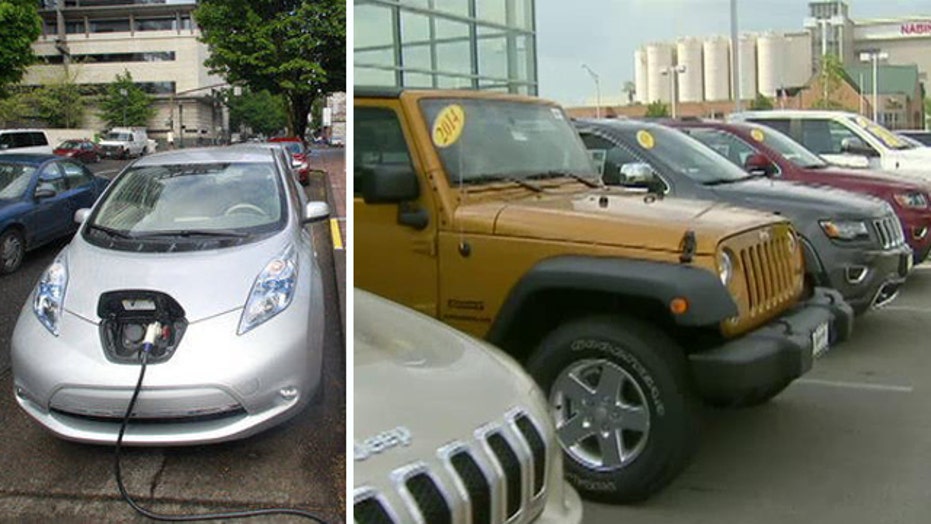 Americans aren't buying what the administration is selling?

LISA BOOTHE: They’re literally not buying what President Obama is selling here, because he’s trying to give them away with a $7,500 tax credit. The problem is President Obama’s entire green agenda is rooted in fanaticism rather than reality. His green agenda has cost taxpayers hundreds of billions of dollars, and has failed to create the jobs that he’s promised us.

MICHELLE FIELDS: The President wants everyone to be environmentalists, but what was he doing on Earth Day? Oh, that’s right; he was flying Air Force One all the way to Florida, burning 9,000 gallons of fuel. Look, the problem is, you cannot create demand for something that Americans don't want. What they don't want is electric cars. The problem with picking winners and losers, which is what this administration is doing when it comes to industry and businesses, is that the taxpayer is the one who ends up losing. It's all our money that is pushed for electric cars and our money that is wasted.

JUAN WILLIAMS: I mean, that's the future. You know what you see is right now gas prices are low, people are feeling good, the economy's coming back, so people are saying, “hey, I’m going to get me that car and I don't have to worry about, you know, gas economy.” Well, you know, this can be short-sighted. But have a good time.

JONATHAN HOENIG: It's hard to have a good time. We've spent hundreds of billions of dollars. That's actually people's taxes. That's money people could have used for their own lives. This whole green energy program, certainly the green car program, has been a total disaster. Hard to underestimate how big of a disaster. Some estimates say we've spent $200,000 per electric car that's now on the road. Incentives and tax giveaways and everything else. It’s not surprising why this has been such a disaster. To Michelle’s point, this has been all about government using force against innocent people who frankly get a lot more value out of a pickup truck than they do an electric car.

WAYNE ROGERS: You have to go back and look at the entire amount that has been spent on solar panels that didn't work and on wind farms that didn't work and all of these various alternative sources of energy that didn't work. The biggest problem, of course, the interference in the free market. If somebody wants to buy a pickup truck and it's burning a lot more than some electric car, he's going to do it. Gas prices are down not because of the government; gas prices are down because we came along and we started doing things like fracturing.

MICHELLE FIELDS: ObamaCare is the gift that keeps on giving. Not only can you go online and sign up for Obamacare, but now with a click of the button you can sign up for basically the   “life of Julia”, where you can sign up for food stamps much more than ever before because of ObamaCare. Since ObamaCare has been implemented more than 600,000 people signed up for food stamps. This costs $79 million a month. We have $18 trillion of debt. How are we paying for this? It's crazy.

JONATHAN HOENIG:  Just check a box. You get food stamps. They put a calculator on these websites so you can determine how much you get in food stamps. ObamaCare was never about healthcare. It was always about control, and government got it. Government is now at the middle, right in the crux of all American healthcare. The side effects are just starting. We've seen premiums go up. We've seen doctors leaving the practice. Of course once an entitlement is established in this country, it will never go away. The problems for ObamaCare will continue to pile up just like Medicare, Medicaid, social security and every other government freebie.

JUAN WILLIAMS: The real issue here is these people qualify. These are people who are in need of the food. And the idea that some say, “oh, this is terrible”…We, as Americans, established this program to make sure than children and those in need don’t starve. That’s bad?

LISA BOOTHE: This is exactly what Obama and liberals want. They want a society that is completely dependent on the federal government from the cradle to the grave.

WAYNE ROGERS: Well, Eric, this goes back a long way to when Roosevelt was president. To a case called Wickard versus. Where a wheat farmer was vs. Filburn where a wheat farmer was growing wheat for himself, his own consumption, and they said he was interfering in the marketing order that was then, because if he didn't grow the wheat he would have gone to the  marketplace himself and bought the wheat. This is the most outrageous assumption of power by the Supreme Court and by the government where they can tell you what you can grow, what you can't grow, what you can sell, what you can't sell. By the way, if you violate it we're going to fine you and take your property away.

JONATHAN HOENIG: Well, it's all manipulation. It's all price controls. This goes back to the late 1930s. It’s not just restricted to raisins, either. There are 20-plus different crops where government dictates how much can be grown, where it goes, et cetera. And government should have no role in agriculture at all. It didn't have any role up until the early 1900s. Now you've got the USDA telling people what it can grow, what kids should have on their plates every morning—every element of agriculture in this country. There's no free market anymore.

JUAN WILLIAMS: I thought Wayne did it really well. The principle sounds like government interference. Let me just note that you've got 16,000 farmers who are siding with the government here because it keeps up the prices at times when market goes down. The farmers don't want to disappear, they want to do business. Don't forget farm subsidies, ethanol subsidies, when farmers don't even cultivate the land. Why? Because the government wants to make sure we can all eat.

MICHELLE FIELDS: Yes, like they said, the stupid law goes back to the New Deal era. There's nothing more depressing than a depression-era-FDR economic policy. The government can't take anything from people unless they compensate them, and they aren't compensating these families. I hope they win and I’m glad that they’re fighting for their rights.