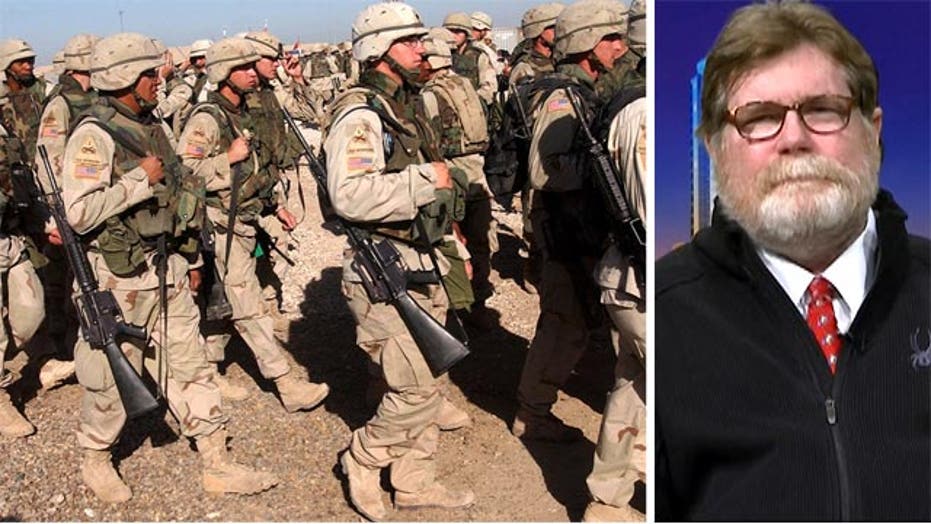 Former Navy Seal on what this means for the country

This is a rush transcript from "Hannity," December 23, 2013. This copy may not be in its final form and may be updated.

DAVID WEBB, HOST: As this administration plans to withdraw all American troops from Afghanistan by next year, serious questions are being raised about what this will mean to the country and how our enemies will respond.

Last week I made a trip to Afghanistan and saw with my own eyes exactly what's happening on the ground. Joining me now to help analyze the situation, former U.S. Navy SEAL, a former assault team leader of SEAL team six, who was also with me in Afghanistan, Chuck Pfarrer. My brother, Chuck, we have just spent some of the most amazing days I have in my life looking at a situation on the ground, being briefed on it, meeting with Afghan partners, such as it were with the challenges, traveling around the country. It's not just precipitous withdrawal. It's we've spent, Chuck, blood and treasure, a significant amount. We flew back on a medevac flight. Americans wonder what's the outcome. Leadership in my take is leaving something better than when we found it. And we have a great team under NATO air command that his trying to do that with their Air Force. What did you see? What is your take on this, my friend?

Key to survival of the Afghan republic is whether or not they're going to have an air force. There isn't a whole lot we need to teach the Afghans about being light infantry. They are masters of the world at that. But as we were there, seeing the work of General John Michelle, it is key that the Afghan air force be able to support many missions that are going to be necessary for them to continue to prosecute a counterinsurgency war. We saw that tremendous challenges in front of them.

WEBB: There is a part of this that I see, Chuck, that not only working with partners. In any situation there are people who want freedom all over the world. And there are Afghans that want to be free. You and I have met with many of them in the past couple of days. This effort led by General John Michelle and NATO air command is to give them transportation, the ability to get around Afghanistan to medevac, to bring the dead home. But also in our own history, we've seen of military aviation become the development of commercial aviation and it helps to spread more and more commercialism, capitalism, dare I say it, possibly the growth of a nation. If we leave precipitously, what does that do to that part of the world? Is this Afghanistan's last chance?

PFARRER: Well, interestingly, as General Michelle was saying, he is not only manufacturing Afghan aviators. He's helping to put forward a new breed of Afghan citizens. You can remember the pilots we met, the Afghan pilots, how proud they were to be flying the C130s, how proud they were in those C208s. You know, you're looking at a new kind of Afghan, a person connected to the world, a person not burdened down by religious prejudices. These are the kinds of young leaders, men and women, aviators that General Michelle is working with that are going to be the future of Afghanistan, not only in the military tactical, immediate future, but in their future going forward as a Republic.

WEBB: You've traveled all over the world as a SEAL and just as a private citizen. Comparatively, do you see it? There are challenges here. Let's not kid ourselves. Anyone can turn at a moment's notice. That is a reality in Afghanistan. But do you see enough of a march from those who want a free society or possibly a future for themselves outside of Taliban, outside of the radical Muslims, outside of that kind of area?

PFARRER: You know, it's razor thin, because it's one thing for you and I to sit here and talk about what the Afghans should do or what, how the country should go. It's quite another thing to be in an isolated valley, little village somewhere, where, you know, you might see American forces - coalition forces during the day, but in the night you're dealing with Talibs. That is the hard part. Getting the country - and getting the individuals so they are safe enough to move forward, rebuilding their country, that is the important part. We talked about - and General Michelle talked about the war of the idea. We've got to win the war of the idea.

WEBB: Well, we not only have to win that war, but right now with our men and women, and by the way, to General Michelle and his team I can't say kudos enough, Colonel Fritz, [inaudible], Sleepy Serge, as I mentioned that will get him a little laugh over there. They're home, they're away from us at Christmas, so this is a chance for our military to show and for us to show we support what they're doing over there with their partners. Chuck?

PFARRER: Well, yes. You know what, I just wanted to say tomorrow is Christmas Eve. It's a great moment for families in the United States. But tomorrow morning in Kabul and Bagram it's just going to be another day on the flight line. And it's going to be more missions.

And that is all the time we have left this evening. Thanks you for being with us.

This is a rush transcript from "Hannity," December 23, 2013. This copy may not be in its final form and may be updated.