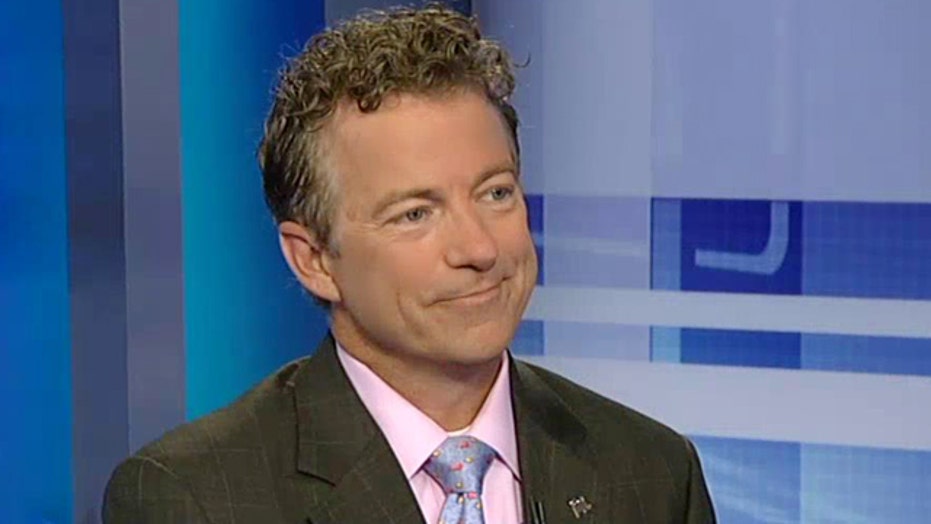 GOP presidential candidate on the ISIS-inspired attacks in Garland, Texas, the latest 2016 polls and how he would have handled the Baltimore unrest

This is a rush transcript from "On the Record," May 5, 2015. This copy may not be in its final form and may be updated.

GRETA VAN SUSTEREN, FOX NEWS HOST: This is awful. ISIS is bragging about operating right here in the United States and saying more and bigger is to come. The terror network claiming responsibility for the shooting attack in Texas, but the White House being slow to call this a terrorist attack. What does the Obama administration needs to do to make sure another attack doesn't happen here in America?

VAN SUSTEREN: First, would you call this terrorism what happened in Texas?

PAUL: Absolutely, it's terrorism. I think it's an example of how we do need to secure our border. I'm not sure where they came from but we do need to --

VAN SUSTEREN: The Internet doesn't see borders. If you have ISIS calling the shots from abroad and directing people in the United States -- hypothetically. We -- they're bragging about it. I don't know if they actually did that. How do we protect ourselves from that if you've got sort of a receptive group of people here, for whatever reason, want to be jihadists, and you have ISIS overseas calling the shots and encouraging them?

PAUL: I think we're never fully protected, but I think we need to do everything we can to stop threats to us. This is one of the things that gets confused with my position. I don't want bulk collection of all of our data and I don't want the government looking at everything, but I'm more than willing to have the government selectively look at the data using the Constitution, using probable cause.

The one gentleman that had already been implicated in this, same as the Tsarnaev boy, the boy in the Boston bomber, is that we already had some information. I think we had enough to ask a judge for permission to look at records, both in this case and in the Boston bombing case. I don't think we're actually using the constitutional tools that we have in an appropriate fashion.

VAN SUSTEREN: Do you fear ISIS is really going to come through on this big threat? I don't know if it's a crazy threat to create panic, but do you suspect they have in roads in the U.S.?

PAUL: I think that radical Islamism does. It disturbed me that there are still some nation-states that are supporting it. I think Saudi Arabia often finances radical Islam and the teaching of hatred to the West and hatred of Americans. I think it is important that we know that. It's important that we know that there is a threat within and a threat without. I think we can stop it with more aggressive use of actual constitutional tools.

VAN SUSTEREN: All right. We turn now to some polls. NBC News/"Wall Street Journal," this one you might like, is that general election preferences among registered voters, you are by one tick up the best in the GOP group to take on second of state, Hillary Clinton. What do you think about that?

PAUL: The interesting thing is, that's a "Wall Street Journal" poll. It shows us being the Republican that is most likely to beat Hillary Clinton nationally. But there's also been three or four polls in the last two weeks saying the same thing in individual states. So Colorado, the battleground state. We are the only Republican that beats Hillary Clinton in Colorado. Same in Iowa. Same in Pennsylvania. Difficult to win states. I think it's because we have a different message. In this poll, we were ahead among Independents by eight points over Hillary Clinton. That's how you win elections. We think it's very important for Republicans at large to know that.

VAN SUSTEREN: One quick question on Baltimore. Would you handle it differently than President Obama, who has been hands off on this one?

PAUL: I would have handled it differently than the mayor of Baltimore, that's for sure. I think it's a mistake to say, hey, guys, you can pillage the city for a while and we'll let that go, and we'll be sort of standing back. I think it's also important to know some of the underlying causes of why there's unease in our country. One of the stories I've been talking about is a young man in New York, named Khalid Browder, who went to prison three years in Riker's. Never had a trial. The guy who accused him of the crime was here in the country illegally. He tried to commit suicide because of that. That's part of the unease in our country. None of it excuses violence, but there is an unease in our big cities and we need to be aware of it.