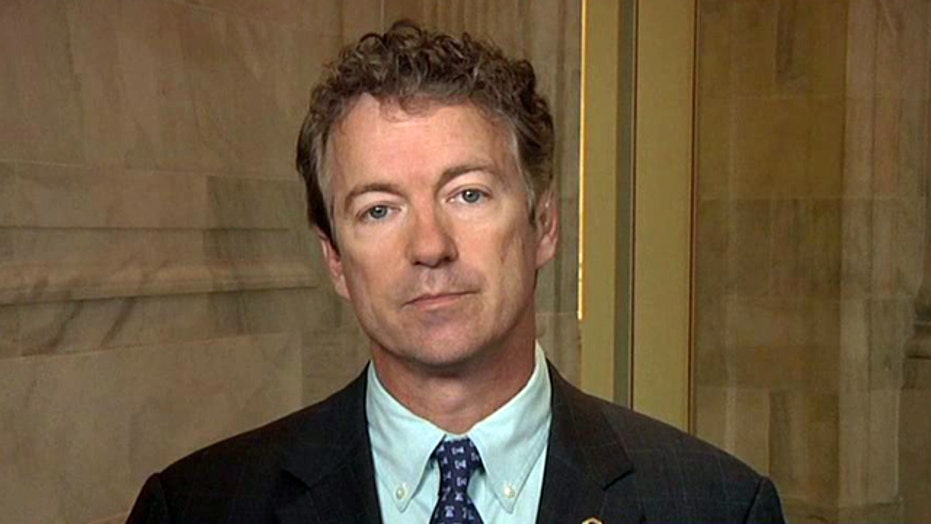 Congressman says the administration has been 'disingenuous' about ObamaCare

This is a rush transcript from "Hannity," October 29, 2013. This copy may not be in its final form and may be updated.

SEAN HANNITY, HOST: All eyes will be on Capitol Hill tomorrow when lawmakers face off with HHS Secretary Kathleen Sebelius. So what will the architect of this disastrous ObamaCare rollout have to say for herself? And what questions do you, the American people, deserve answers to?

Here with a preview of that and much more, Kentucky senator Rand Paul is back. Sir, how are you?

SEN. RAND PAUL, R-KY.: Good evening. Glad to be with you.

HANNITY: All right, let's start with what happened, Marilyn Tavenner today -- I thought it was a disaster. I mean, she couldn't explain away, "If you like your plan, you can keep it." She couldn't explain away the higher costs, higher premiums people are paying. And then she actually made the statement that it is working, which I found...

HANNITY: It's really well if we just pay attention.

PAUL: I hope what we hear tomorrow from Secretary Sebelius is her resignation. I would say that hers is an extraordinary level of incompetence, even by government standards. You know, I always say that it's not the government's incompetent, although it's a debatable question. It really is that they just -- I don't think they have the same ability that private business has to perform functions.

And I just imagine what would happen to the marketplace if we said to Walmart, here's a $10 co-pay. The government's going to have insurance for your purchases at Walmart. What a disaster it would be.

HANNITY: Yes. I guess the thing that we're discussing here tonight is the president sold this to the American people one way, and now we know that as of July of 2010, they knew that there were going to be all these Americans with individual health plans that were going to lose their coverage. Is that a lie, in your opinion?

PAUL: Well, you know, 2 million people have had their policies canceled now. In my state, 6,500 have been canceled. And the interesting thing about Kentucky is they keep bragging about how it's really working in Kentucky because we have a state-run exchange.

Well, yes, it's working to sign up people for Medicaid. Nearly 90 percent of the people in my state signing up are signing up for free health care. Sure, that's pretty popular.

HANNITY: Well, I agree with that, too. I mean, you can add that. I mean, I'll put up on the screen. We've been following it. The website -- remember, the day before, they said it was going to be so easy to use and premiums were going to decrease. We know that's not true, either. And you can keep your doctor. And if you like your plan, you can keep your plan. And it's only going to be $900 billion.

Tell me if I'm wrong in my analysis, Senator. I see that the president pretty much had three options. Once -- this was the holy grail for the left for a long time. Over 100 years, progressives have wanted this. But they knew that if the truth were known about the program and the effects that it wouldn't garner enough votes in Congress, in my perspective. So they had three choices here. And, the first was to tell the truth and push for the program anyway. The second would be to change the program to address the concerns. And the third would be to lie. Do you think this was...

No, he sold it completely the opposite. He said, if you have your doctor, you have your insurance plan, you'll be able to keep it. That wasn't honest with the American people. Now they're saying some of you can keep your doctor. The bottom line is when the employer mandate comes out, if your insurance doesn't conform to those four plans -- for example, if your insurance is too good, they're going to make you pay a tax. So as I traveled around Kentucky last week, people come up to me and said...

PAUL: ... I have great insurance, but I'm going to have to pay a tax on my insurance because it's too good for ObamaCare.

HANNITY: Now, I noticed your colleague, Senator Ron Johnson and now House Republicans have joined in. They've introduced the If You Like Your Plan, You Can Keep Your plan Act. Is that going to go anywhere?

PAUL: Well, I'm supporting it. And what he's doing is getting rid of these crazy rules that say if your insurance changed somehow that you no longer can keep it. But you have to realize when they slid that one little sentence in that said if your insurance changes from the time ObamaCare is passed to the present, you lose your insurance. They slipped that in because they want you to be on one of four government choices.

So this is a really a taking of your freedom. When my friend, Ken Cuccinelli, who's running for governor in Virginia, talks about it, he says ObamaCare is not about health care, it's about taking your liberty and your freedom of choice.

HANNITY: I think three months later, when they actually read the bill after they passed the bill, I think they figured out that there were 19 million people -- fewer people that could be in the exchanges. And for this whole thing to work, they've got to funnel everybody into it.

So in my mind, it was probably more sinister than we even know. But anyway, Senator, good to see you. Thank you.