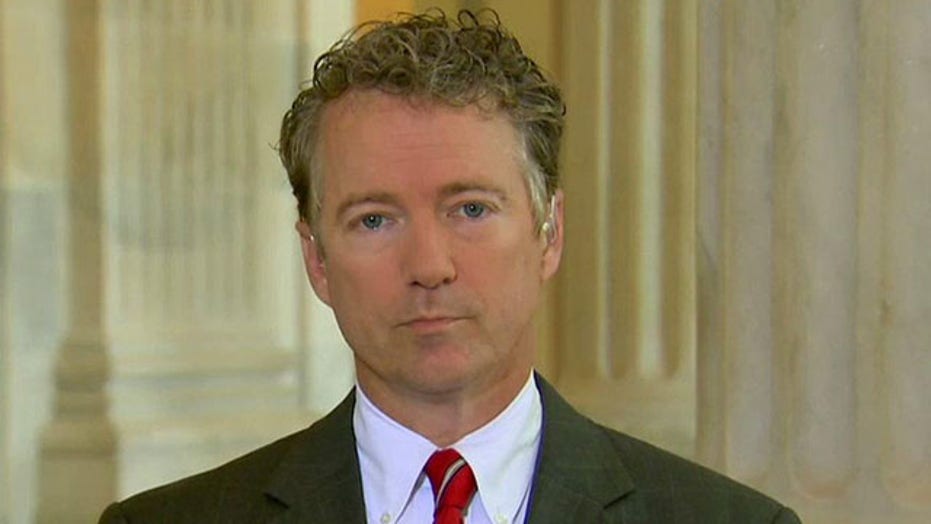 Rand Paul on Iraq crisis: 'I would follow the Constitution'

This is a rush transcript from "Hannity," June 19, 2014. This copy may not be in its final form and may be updated.

DICK CHENEY, FORMER VICE PRESIDENT: It's not just Iraq, but it's a whole pattern of behavior over the last six years that has refused to recognize that there is a war on terror, that we've got to move very aggressively to be able to deal with that, and this administration has repeatedly demonstrated that they don't believe it.

HANNITY: Well, that was former vice president Dick Cheney slamming the Obama administration for its failure to acknowledge that we have been and continue to be in a global war on terrorism. Here to respond to this and much more is Kentucky senator Rand Paul. Senator, how are you?

HANNITY: Do you agree with what the former vice president said there?

PAUL: Well, you know, I think he has a point. I think that the Obama administration has tried to downplay that it's an ongoing threat of terrorism. They recently said that the five Taliban they released are no threat to Americans. So I would agree in that sense.

Where he and I may part ways is that I think, in some ways, terrorism is worse because there is a chaotic vacuum in Iraq that came out of the Iraq war. And so I think, really, the Middle East is less stable since the Iraq war, that really, when we had the -- before the Iraq war, you had somewhat of a standoff between the Sunnis in Iraq and the Shiites in Iran. Now I think Iran is somewhat emboldened and with a vacuum in Iraq, everybody's sort of flowing into these vacuums...

PAUL: … created by the war.

HANNITY: Let me disagree with you because we know that the surge worked. There was stability. Violence was down to the lower point than even before the war started. Democracy imperfect, but it was certainly an ally of the United States of America.

The person that pulled is out the president.

HANNITY: And George Bush warned about it. He said you can't pull out too early. You got to provide intelligence. You've got to provide training. And if we continue to do that, the stability will remain.

PAUL: But the one argument I would make on the other side is that the Iraqi government, Maliki, said no to U.S. forces. The other thing I would say is that, ultimately, for a country to survive, they have to want to survive and they have to be willing to put their lives on the line. The fact that they ran to the tune of thousands of soldiers running -- I just can't see putting the American GIs in to defend Mosul when the Iraqis won't stand up...

HANNITY: But Senator, you're...

HANNITY: You're -- you're kind of forgetting the fact that this is a decision the president made. As soon as the Americans left, literally, their intelligence was shut off. And that's where their -- their the battle against the insurgency began. If they had good intelligence -- the Iraqis were doing the fighting themselves at that point, and at that point, America just cut and run I think before they got the job done. You don't agree with that? You don't agree with that?

PAUL: Well, what I would say is that Maliki has been an ineffectual leader, and by creating a solely Shiite government...

HANNITY: I'm not disagreeing with that!

PAUL: ... they were in a predominantly Sunni area.

PAUL: ... Maliki has been ineffective leader, and Maliki was the one who said he didn't want U.S. troops.

HANNITY: But that wasn't my question!

HANNITY: Because I would argue that the president was so married politically to the idea that he was going to pull our troops out, regardless of the timing, that that resulted in the loss of all the gains and all the sacrifice we had before. You don't agree with that?

I would also say that where I really blame the president is that the president has been arming radical Islamic rebels in Syria, and part of this fighting force has been allied with the people we're arming in Syria.

PAUL: And so there are great contradictions that abound, Sean.

PAUL: It is hard for me to imagine American soldiers fighting alongside Iranian soldiers in Iraq.

PAUL: I can't fathom that.

Here's the question. If Rand Paul were president of the United States, what would Rand Paul do right now? Would you allow air strikes? Would you send in soldiers? The president said today 300 people, et cetera. Would you support that?

HANNITY: What would you...

HANNITY: What would you want?

PAUL: I don't agree that a 10-year-old authorization is sufficient...

HANNITY: What would you want to do, though?

HANNITY: What would you ask for if you were president?

PAUL: Air strikes? I have not -- I have not ruled out completely.  What I would say to air strikes is that they are a form of war, and if we are going to get into the middle, we have to know...

PAUL: ... and that Congress should vote on it because that's what the Constitution says.

HANNITY: I agree with that completely. Last question, about Lois Lerner and the e-mails. In this day and age, I'm -- I'm kind of a little bit perplexed that the Republicans are fixated on a hard drive, when any e- mail, you know, I can access it from my iPhone, my iPad, my work computer, my home computer, my other work computer.

PAUL: Here's the thing is, maybe instead of asking the IRS for this, we should ask the NSA. They seem to have everybody else's e-mail.

PAUL: It -- it -- it appalls me that we are paying her. She's in paid retirement now. It appalls me. And she should be prosecuted if all of this is true. But yes, I think there probably is a way to get the e- mail, and my guess is we're being stonewalled.

HANNITY: Yes. All right. Thank you, Senator. Appreciate it.