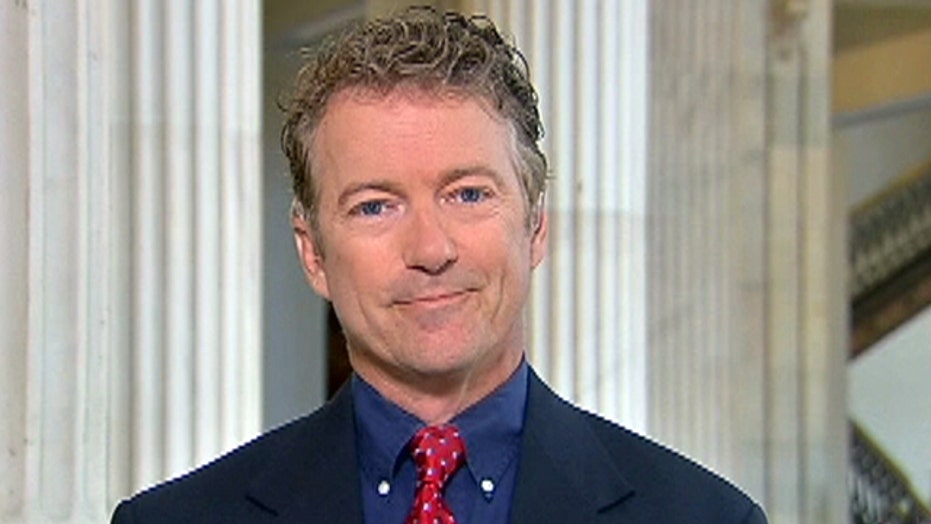 This is a rush transcript from "Hannity," July 16, 2014. This copy may not be in its final form and may be updated.

SEAN HANNITY, HOST: There's chaos around the globe, and here at home, a feud is growing among leaders of the GOP in terms of our what our foreign policy stand should be. Now, should the U.S., for example, intervene in troubled areas like Iraq, or should we avoid foreign intervention and focus on critical issues here at home?

Here to give us his take is one of the men stirring everything up, Kentucky Senator Rand Paul. Senator, how are you?

HANNITY: All right, let me go to -- let me go to Rick Perry. He says, "Rand Paul's brand of isolationism, or whatever term her prefers, would compound the threat of terrorism even further." He said, "It's disheartening to hear fellow Republicans such as Senator Rand Paul suggest that our nation should ignore what's happening in Iraq."

Give you a chance to respond. I think this is a healthy debate, by the way. I don't think this...

PAUL: Well, you know, it might be healthy, but that sounded like a bunch of name-calling to me, Sean. I'm happy to talk about the specifics.  I think that the situation with ISIS has become worse because they had a terrorist wonderland over in Syria, where they're organizing and coming up into Iraq.

One of the curious things about ISIS is, do you know who the one country that's bombing them and trying to put them out of business? It's Syria. But we're supporting Islamic rebels in Syria against them.

But what I would say to people who want to criticize me and call me names is, do they want to put troops back in? The Iraqis stripped off their uniforms and ran, wouldn't defend their cities, and you want our GIs to get on the ground and fight?

PAUL: So what in the world's the governor calling for? Is that what he wants, troops on the ground in Iraq? I think that's a mistake.

I did have a disagreement with you, and I discussed it a little bit the last time you were on the program. You said you didn't blame Obama for Fallujah and Tikrit and Mosul and all these cities falling that our brave men and women fought and many died for.

PAUL: Yes, that's not exactly accurate, Sean. I don't say I don't blame Obama because I do blame Obama for emboldening ISIS in Syria by giving arms to the Syrian Islamic rebels. So I do blame him for that...

HANNITY: But you said...

HANNITY: ... didn't blame him for what was happening in Iraq.

HANNITY: ... you said a war we shouldn't have been in.

PAUL: But I did say also that his speech at West Point, where he said that jihadists and terrorism are on the wane -- I don't agree with that.  But I do say that his war in Libya and his arming of Islamic rebels in Syria have made the jihadists emboldened. There's (ph) more numerous, and they are more a threat to America.

So it's unfair for people like Governor Perry to say I'm ignoring the situation or not conscious of this. I am very conscious of this. Not only that, I think the primary responsibility of the federal government is to defend our country and to defend our interests. And I have said that Maliki is an ally, the government of Iraq is an ally, and that we will support them.

PAUL: But I have said that troops on the ground is a mistake, and it's a very confusing situation.

HANNITY: I'm not disagreeing -- I blame Obama in this way. We had those cities. We had an emerging democracy, albeit not perfect, but emerging. And I think the mistake that we made was President Obama's mistake. A, we politicized the war, and B, the president ran on it, and he didn't see it through. If America's going to send men and women to go fight, you've got to fight and win. And part of winning sometimes means that we should have stayed there to provide intelligence and training. And if we would have done that, I don't think we'd be in the situation today where we see these cities falling.

PAUL: The only place where I'd have a mild disagreement with you, Sean, is that I think we do still provide intelligence and training...

HANNITY: He pulled out!

PAUL: Let me finish that. I know, but let me finish. We trained the Iraqis for a decade and they cut and ran. And so the thing is, how long is it going to take these guys to figure out how to defend themselves? I think they will defend --

HANNITY: We still have a presence in Germany, in Korea.

HANNITY: We still stayed there to do those two specific things. And I talked to a lot of generals, and seem to agree with me that pulling out early was the big mistake that Obama made because they politicized another war.

PAUL: Right. But when you discuss a future, a future is always -- there are alternate scenarios for future. So for example, if we had had 1,000 troops in Mosul, one possibility is that they would have been overrun and we would be in a massive war and we would be back in there. If we want to clean up the cities that have been taken, it would take the equivalent of a surge. The military surge does work, it would take 50,000 to 100,000 troops. I don't think the American people -- frankly, I think if you have 100 GI's on your show, they are not allowed to do this, but if they were, I think most of them would say they're not interested in going back to Iraq to fight where the Iraqis won't fight.

HANNITY: I have to say goodbye. Thank you for being with us, appreciate it.