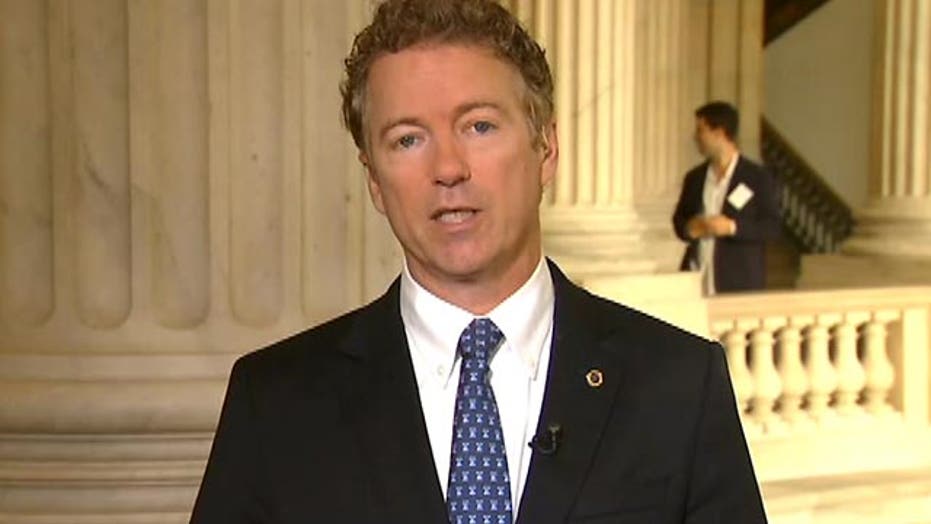 This is a rush transcript from "On the Record," May 7, 2015. This copy may not be in its final form and may be updated.

GRETA VAN SUSTEREN, FOX NEWS HOST: Presidential contender Senator Rand Paul is here and today, a federal appeals court in a 3-0 ruling held that the NSA collection program is illegal and not covered by the Patriot Act. Senator, welcome to the show and your thoughts on this 3-zip ruling by the second circuit.

SEN. RAND PAUL, 2016 PRESIDENTIAL CANDIDATE: This is a big deal. We've been waiting for this for over a year now. I sued the NSA last year because I think that the whole program really is not consistent with the Fourth Amendment and what we find out today is that the appeals court thinks it's not even consistent with the statute, the Patriot Act, which also goes on to mention that many people in congress had no idea this program was going on, and most of us don't think that this program is consistent with what the Patriot Act actually said.

VAN SUSTEREN: So what are your thoughts tonight about Edward Snowden? But for Edward Snowden, probably the American people and maybe you wouldn't though about this program that now this court -- it hasn't gone to the Supreme Court, but this federal appellate court says it is beyond the authority of the U.S. government.

PAUL: The information became incredibly important because the director of intelligence James Clapper actually came to the senate and lied about the program and said it didn't exist, so if not for the information that Snowden released, we would have no idea that this illegal operation was going on by the government. So this is a big day and it's a big deal that the government has to live within rules that are set and if we have a government or an intelligence community that thinks they can do anything, that's a real problem for freedom.

VAN SUSTEREN: All right, so do you let Edward Snowden come home and not face prosecution?

PAUL: Well, I think it's complicated this in the sense that he committed civil disobedience, he broke the law. And so, there will have to be some sort of punishment, but I think it could be negotiated because he did to reveal something that the government was not telling the truth about and which the courts are now saying was illegal. So I think it definitely gives some justification to it, but the other side of the coin is you really can't have people who have privileged information just decide when they will reveal it. A better way would be to actually have a whistle-blower program where he could come privately and reveal the information, but he didn't qualify for that because he was a contractor and not a government employee.

VAN SUSTEREN: OK. And let's assume that we have a President Rand Paul. It is your justice department that now has to make the decision. What do you tell the Justice Department to do if you think something needs to be negotiated? What is the deal with Snowden?

PAUL: I'm not sure I have an answer on that, but I would as president immediately stop the bulk collection of records. I think it's unconstitutional. The court now says it's illegal, so I would not collect phone records without a warrant with someone's name on it, with the items we were looking for and with probable cause. So I would end the program that we have of bulk collection immediately.

VAN SUSTEREN: I should add that a review panel concluded that the program had not been critical to disrupting any terrorist plots in the in the U.S. Do you know of any success with this program? Did it do anything for protect us that you know specifically?

PAUL: I know of no one that was ever caught or stopped from this program. They say it was used in conjunction with other information, but typically, but typically we have information of an individual like the guy that did the shooting from phoenix, we knew his name. I'm all for look at his information. I'm for calling a judge and saying we know this guy Simpson in Phoenix and he's doing X, will you give us a warrant for his phone. If I was a judge, I would have said yes. But I don't want to look at everybody's phone records in Phoenix. I want to look at the guy that we have probable cause to look at his records.

VAN SUSTEREN: Senator, thank you very much for joining us.