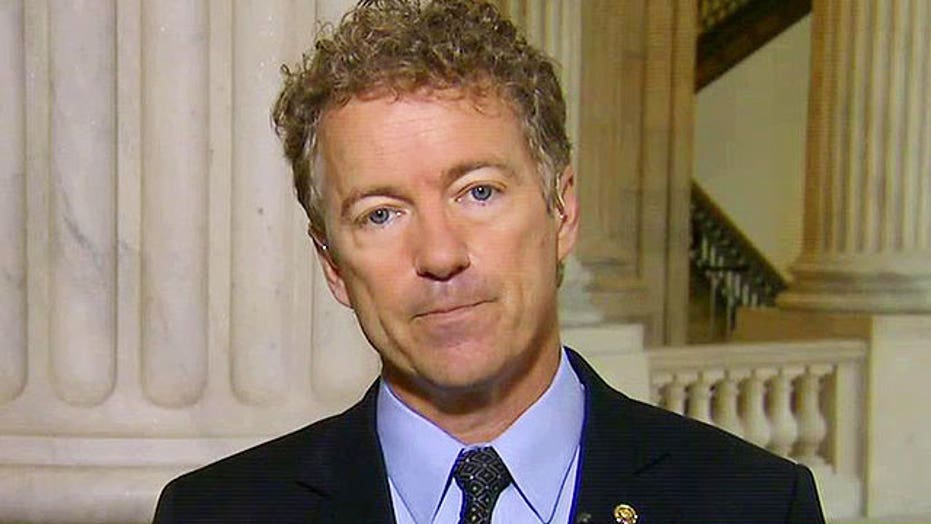 Rand Paul defends his filibuster against the Patriot Act

This is a rush transcript from "Hannity," May 21, 2015. This copy may not be in its final form and may be updated.

ANDREA TANTAROS, GUEST HOST: Senator Rand Paul took a big stand against the renewal of the Patriot Act last night by holding a 10-plus-hour filibuster on the Senate floor.

SEN. RAND PAUL, R-KY., PRESIDENTIAL CANDIDATE: My voice is rapidly leaving. My bedtime is long since past. And I think it's time that we summarize why we're here today and what my hope is for the future with this issue.

We need to end the bulk collection of records, but that's not where this battle ends. There still is a question of whether or not the executive is gathering a great deal of information through executive order.  I think that has to be reviewed. It has to be reviewed in public.

TANTAROS: Joining me now is the man leading the fight against the Patriot Act and the NSA surveillance program, the author of the upcoming new book out on May 26th, "Taking a Stand: Moving Beyond Partisan Politics to Unite America," 2016 presidential candidate, Kentucky Senator Rand Paul.

The senator is now asking Americans to join his fight against the Patriot Act. How are you doing this, Senator, and what are your chances of actually getting rid of this piece of legislation?

PAUL: Well, you know, I think public opinion does have a big influence, even in Washington. If people go to RandPaul.com, we'll help to relay that message to Washington and we'll help to let people know that what we really would like to see is that the government has to have your name on a warrant.

This is what our Founding Fathers fought the revolution over, is that the government shouldn't be allowed to have a blanket warrant or generalized warrant to collect all of our records. And so I think if we have enough influence and enough people go to RandPaul.com, I think we can have an influence. Already, they said they weren't going to give us any amendments. Now it looks like maybe we will get to amend the Patriot Act.

TANTAROS: Senator Paul, you're a potential contender for the White House Jeb Bush was asked about what you are doing and he intimated that you're operating from a separate set of facts. And of course, he's defending his brother's legislation, but he said there isn't a shred of evidence that anyone's civil liberties have ever been violated. How do you respond?

PAUL: Well, I think the violation of our civil liberties is in the collection of the data. We're not alleging that the people who work in the NSA are bad people, that they have bad motives, that they're unpatriotic.  We're just alleging that the government on occasion has historically abused the rights of citizens.

And also, the danger is that the 4th Amendment, which our founders were very proud of, said they have write an individual's name on the warrant, and that if you write the name Verizon and you collect all the records from the company Verizon, that that's not a very specific way of doing things, it's not individualized, and you are not going after people we're suspicious of, we're just going after everybody's records. And that's an invasion of privacy.

TANTAROS: Yes. And Senator Paul, for me, I mean, I fear you get the wrong person at the helm in the White House, and all of that data -- not only is it too much for them the comb through so it might not be useful -- but they could use it against Americans if you get a potentially corrupt president.

Senator Paul, thank you for joining us.