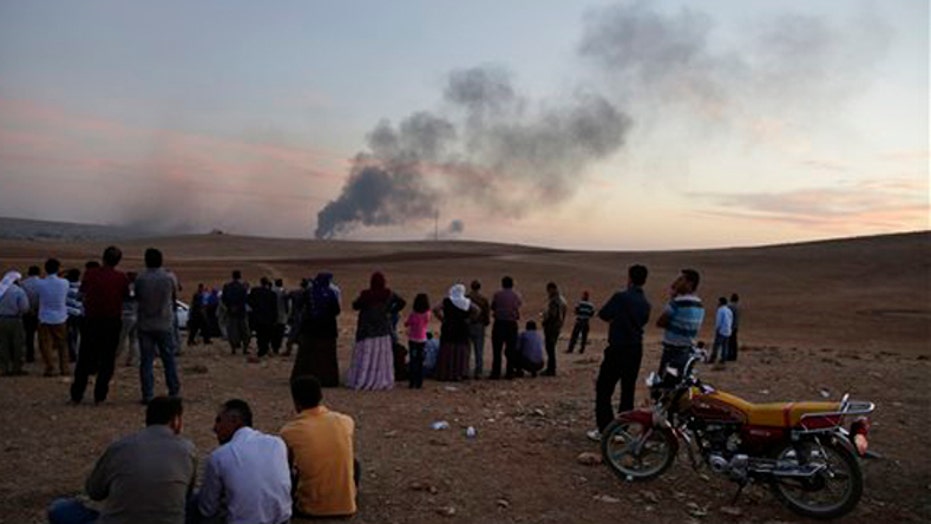 Is Islam truly a religion of peace?

Panel debates the issue amid the ISIS crisis

This is a rush transcript from "Hannity," October 10, 2014. This copy may not be in its final form and may be updated.

PRESIDENT OBAMA, APRIL 6, 2009: The United States is not and will never be at war with Islam.

OBAMA, JUNE 6, 2009: And I'm also proud to carry with me the good will of the American people and a greeting of peace from Muslim communities in my country. As-salamu alaykum.

Islam is not part of the problem in combating violence extremism. It is an important part of promoting peace.

OBAMA, AUG. 13, 2010: Our enemies respect no religious freedom. Al Qaeda's cause is not Islam. It's a gross distortion of Islam.

SEPT. 25, 2012: The future must not belong to those who slander the prophet of Islam.

SEPT. 10, 2014: ISIL is not Islamic. No religion condones the killing of innocents, and the vast majority of ISIL's victims have been Muslim.

SEPT. 24, 2014: We have reaffirmed again and again that the United States is not and never will be at war with Islam. Islam teaches peace.

SEAN HANNITY, HOST: All right, since his first year in office, President Obama's been parading around the world, proclaiming that Islam is a religion of peace. However, right here in America, just last month, this man, Alton Nolen, beheaded one of his co-workers after trying to convert her to Islam and others to Islam in a broad convert or die. That movement now fueled by the group ISIS. That terror network is still very much on the march, which is why tonight we have put together a very distinguished panel to help us answer the important question, is Islam truly a religion of peace?

All right, this is where we get into -- and I'm going to start with you, Dr. Jasser -- into very controversial territory because we're raising a very important question. I look at Boko Haram. I look at ISIS. I look at Al Qaeda, the Muslim Brotherhood, Islamic Jihad, Hamas, Hezbollah. They all are terrorist organizations that base their belief system on radical Islam or, one might argue, the strict interpretation of the Koran.

DR. ZUHDI JASSER, AMERICAN ISLAMIC FORUM FOR DEMOCRACY: Well, you know, families like mine that came here and felt we could practice our faith more freely in America than in Syria or any other Islamic majority country feel that we have an interpretation of Islam that is consistent with modernity and with liberty. But we would be fooling ourselves -- I mean, we need an intervention as a faith to realize that these by-products are not coming out of thin air. There is a fascist, supremacist interpretation that dominates so much of the media from Al Jazeera...

HANNITY: And it's growing!

HANNITY: And it's growing!

JASSER: Now, the interpretations you gave, though, Sean, are English interpretations of Arabic script. Every faith, I mean, even the Catholic Church had 300 years before lay Christians could read their own script in Latin. Islam has the same type of reformation that needs to go through where we can interpret our script, our passages. That word for "friend" actually, Olyeh (ph), it doesn't mean "friend," it means legal...

HANNITY: Doesn't it go back earlier than that, though?

BECKEL: And the Wahhabis have been -- have been and always will be terrorists. If you associate yourself with that brand of Islam -- and I think the doctor's exactly right -- it's a branding issue here. If people were to take Christianity and assume -- and pick out in Revelations, as many people do who attack Christianity, and say, Look what it says in Revelations, you can say that it's a terrorist...

HANNITY: Well, we don't have -- we don't have a problem with Christians persecuting women and gays, such rigid, radical interpretation of the bible that they justify killing innocent men, women and children.

BECKEL: Because historically, we cleaned that up.

HUNT: I'm saying it happened -- it happened in the Catholic Church.  And it's certainly happening in the Muslim world now. But you just can't pass over a 400-year history...

HANNITY: No, no! I'm suggesting with the modern-day threat and what life under -- all of these groups are under one heading, and that is radical Islamists. They all believe in -- in using their faith to justify their actions to be at war with the infidels or non-believers. That's the difference. And they're willing to kill for it...

HANNITY: ... and their system of justice is oppressive!

HUNT: All I'm telling you is that in history, we've got other religions doing the same thing. As far as the current thing is going, we can define it any way you want. The problem we have is that the -- how we're doing it on my side of the street is simply bombing, 25 years in Iraq hasn't worked, four separate presidents. We -- we -- we have not come -- no understanding of Shia and Sunni and what -- how -- what's eating (INAUDIBLE)

HANNITY: Should we care that women have no rights under sharia?

MUHAMMAD SIDDEEQ, MUSLIM CLERIC: But you can't say women have no rights...

SIDDEEQ: But the point I'm saying is, if we -- Sean, the biggest problem -- and we want to solve it! We have to march (ph) through it systematically. We can't start way down in line and start picking up effects (ph) and not even understand causes. We have to see the cause...

HANNITY: Let him finish his thought. Go ahead.

HUNT: No, of course not.

SIDDEEQ: There are causes!

JASSER: The cause is what? The mixture of state and religion.

SIDDEEQ: Well, maybe that is a cause.

JASSER: The Islamic State, all Islamic...

JASSER: There is no version of the Islamic state that I would ever support, especially as an American, but let alone as a Muslim who believes in liberty!

SIDDEEQ: It's a state of radical, crazy, desperate people...

JASSER: It's theocracy. So you're endorsing theocracy.

HANNITY: I mention all these groups. They're all under a different heading, Boko Haram, ISIS, al Qaeda, the Muslim Brotherhood, Islamic Jihad, Hamas, Hezbollah -- are they all, in your view, radical Islamic terrorist groups?

HANNITY: You can't -- wait! If you can't acknowledge a simple truth like that, I don't think this conversation can get very far!

SIDDEEQ: But Sean, you don't start off in quantum mathematics and ask the third...

HANNITY: All right, let me start -- I'll check them off. Is Boko Haram a terrorist group?

HANNITY: Is ISIS a terrorist group?

HANNITY: Is the Muslim Brotherhood a terrorist group?

HANNITY: Is Hamas a terrorist group?

HANNITY: Is Hezbollah a terrorist group?

SIDDEEQ: Islamic Jihad? I don't know much about them.

HANNITY: Is sharia often used to oppress women and minorities?

SIDDEEQ: Sharia is used in time and conditions...

HANNITY: In the practical world.

SIDDEEQ: ... in a particular place. Sharia has to stay where it was created. And it has to be revised. If we go back and take -- let me just say this one point. If we go back and take a look at some of the laws here -- Don't feed your horse in downtown New York City in the middle of the day -- if we take some of that kind of thinking, that's the same thing you're dealing with sharia law!

HANNITY: We got to take a break.

BECKEL: OK, real quick is, we all got to be very careful here about trying to change other religions, what they believe in. But there is the fact is, Imam, that that religion, your religion, a part of it, has declared war on us. And we have a responsibility as a free nation to eradicate that threat. We don't want to -- Obama's right, we're not at war against Islam. We're not at war against you. We're at war with those who use your religion to radicalize their position to kill people.

JASSER: So you don't admit we need reform?

JASSER: You don't admit we even need reform?

SIDDEEQ: (INAUDIBLE) disagree with that. But I'm saying...

SIDDEEQ: ... and then, because they can't find intelligent people at the doorway...

BECKEL: There are an awful lot of doors...

HANNITY: We have to take a break.