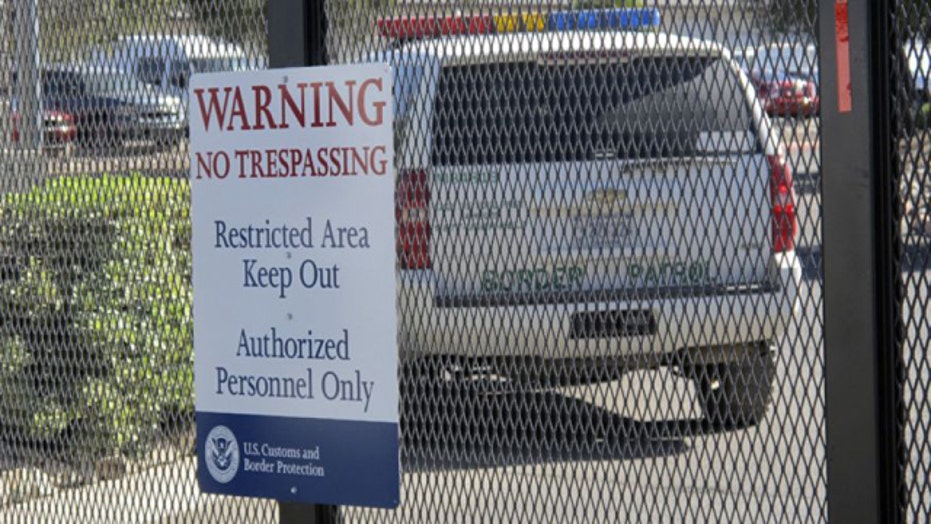 Proof we need to secure the Southern border?

Report: Suspected terrorists may be entering US through Texas border

John Layfield: I'm not sure anything will. As much as it exasperates everybody, but every president since Reagan said they would secure the border, including Obama. None has done so. The time to deal with lung cancer is when you start smoking. We had rumors of ISIS coming across that southern border. You can't go across the Texas border into Mexico, it's not safe. It's being run by criminal organizations. They'll sneak whatever they are paid to get into this country. We need to do this. Not because of illegal immigration. That is a complete separate issue. Simply for the safety of our other country. Take our army. Mexico secures its southern border with its own army. Think of our army securing the Afghan/Pakistan border, put them on our border. We have to use them.

Gary B. Smith: If we are talking about securing the border as some kind of big fence, it's just not going to work. They have thousands of people go over the wall. They were taking hot air balloons, taking zip lines, running cars under the fences. They were doing everything. By the way, that was really only the border between East Berlin and West Berlin. That was only 30 miles. That cost them alone probably $3 million to build. We have 2,000 miles on the Mexico/U.S. border. That would take at least $1 trillion just to build the wall then secure it. 76,000 troops? Then we are saying come in through the coastlines, come in through Canada. I think we need intelligence, obviously. We need to fight aggression. Building a wall, if that's securing the border, we can't cost justify it.

Melissa Francis: I think this is absolutely one thing that makes sense to spend money on. I heard ambassador Bolton talking about today ISIS is probably already here, almost certainly. I think this is the real issue with our borders. It's not about illegal immigration, so to speak. Talking about people want to come to this country and work. I'm an economist by trading. More labor in general is good. We are talking about terror. ISIS and Al Qaeda. Our borders are porous. This is more where the danger is coming from. It's not about building a big wall. It's securing what we have and having intelligence on the ground and we are not doing it right now.

Nomi Konst: Obviously, a wall is not going to fix this problem. It's a is? Sophisticated network of terrorists. Whether it's home grown terrorists training Americans and bringing them back from overseas. And investing in border patrol is not going to protect us as much as we think it is. Will it protect us against illegal immigration? Maybe, cartels? Possibly. Terrorism is a very different issue. If we want to be smart, we have to invest in policy changes and attack the root causes. Maybe it's more sophisticated technology like droning. We have drones going over the border on a daily basis. Are the drones catching these people from walking over the borders?

Jonas Max Ferris: I think we've got to be careful about this intelligence over ISIS. A few weeks ago they were selling kidneys for money. I could easily say that state is trying to get more homeland security money. We had a fiasco. They need to be careful to give a state who finds a reason why they need the money. This is a federal issue and federal borders. It's not a state problem, really. If we are going to be serious, it's not going to happen in Texas. People need federal ID in America to do anything and you have to have it and they can track people in America. It will fake phasing out currency. It's more than fighting at the borders of Texas. That is not going to stop ISIS going through America, moving money around and planning attacks.

Melissa Francis: That is one of the most embarrassing comments I heard in a long time. That's saying a lot because congress people are always embarrassing themselves. She needs to look at the math. The fact of the matter is the average congress person's pay package is three times what regular Americans on average make. They're up above $170,000. The average American makes about $55,000. They have no idea what it's like to live in an average household and to even try and compare themselves is disingenuous, pathetic and disgusting.

Jonas Max Ferris: You can make $1 million more than anybody in the government makes, except the contractors. You got used to stuff. You've got a $20,000 mortgage payment. You can't just get out of that because you are just addicted to paycheck to paycheck.

Gary B. Smith: I think Nancy Pelosi needs to watch "House of Cards." Blake Underwood was a congressman living in Georgetown. I can't even afford to live where he was living. He had it pretty good. As Melissa said, they are getting about close to $175,000. They get a pension with as few as five years of service, for crying out loud. You are in congress like a lot of these guys for 20, 25 years, you are retiring on a nice pension. You can retire at age 50. The other thing is, it's not just regular Joes in Congress. You need a lot of money to be a congressman or senate just to run the campaign. Do we feel sorry for them? Absolutely not.

Nomi Konst: I don't feel sorry for Congress at all. I think what Nancy Pelosi was trying to say but could have done in a better way was people expect to get paid on a monthly basis, even congressmen, and that Congress should be responsible when dealing with the affairs of whether it's shutting down the government. Everybody expect as paycheck. Congress is so out of touch, so out of touch with everyday Americans they don't know how to speak to everyday Americans on behalf of everyday Americans. It does mean when you are running for congress, the average campaign is $2.5 million. Who can raise that money? Rich people? That's why we have a bunch of rich congressmen.

John Layfield: Somebody call a wambulance. This is bipartisan. These are Republicans and Democrats, they are the worst Senate Congress in the history of mankind. They have 12,000 lobbyists in 2014 that are in D.C. spending $3.2 billion to buy these guys off. You can buy them off because they are crooked. The fact that they are out of touch completely out of touch. I wish they would all go away. They would owe us money.

CALLS GROWING TO GROUND ALL RECREATIONAL AND COMMERCIAL DRONES

John Layfield: I want to be able to fly my own drone so i can film the delivery drone with my pizza coming to my football game. Thomas Edison once electrocuted an elephant to prove ac electricity was unsafe. We use it, by the way. The horseless carriage was once banned in cities. We drive cars right now. Those flying contraptions. Nobody said those were safe. This is the real world. Find out how to deal with drones. Don't ban them.

Jonas Max Ferris: They've got to ban these drones federally before it becomes something you think you deserve like a dishwasher. These things are dangerous. There is some mechanism determining if you can fly one of these things safely. Forget the potential terror problem. They are dangerous, a hazard and noisy. I don't think people should have as many cars. I think an unmanned flying vehicle doesn't deserve to be in the hands of all Americans.

Gary B. Smith: I liken it to if you live in a nice apartment building, someone is responsible for making sure the paint doesn't peel and there's not things buzzing around the ceilings when you go to get your mail, stuff like that. The United States, America is our apartment building. There has to be a landlord. As much as I hate the federal government stepping in and doing something, someone has to make sure when I walk down to see the Washington monument, there is not a drone overhead or when I drive in my neighborhood, there is not a drone flying around. This is the one time, maybe one time only, Jonas and I are in disagreement.

Melissa Francis: You can't do it. You guys need to put on a helmet and get over it. There is no way. This cat is out of the bag. It's never going to happen. You are asking the government to get involved and be the one to regulate what's going on about technology? They are the last ones that have the ability to get this done. When it comes to technology, they are always one step behind. I agree, I don't want them flying on my head. I'm going to get a helmet. We have three or four in my house. I have little kids. They love the drones. There is nothing you can do about it.

Nomi Konst: I think if anything it needs to be regulated. The FAA set regulations on the federal level they can't be over 55 pounds. They can't go higher than 100 feet. There are certain regulations they want to put in place so it doesn't impede on your personal privacy and doesn't go over your backyard and film your kids. Your neighbor is filming your kids playing in the pool. So amazon wants to set delivery drones out so they are regulated but don't impede with FAA traffic. This is also a security issue. You don't want your airplanes striking a zone because Amazon is delivering your next season of "House of Cards."

Jonas Max Ferris: Kicking Greece "debt can" down the road has (EWI) kicking up a 15 percent gain in 1 year

Melissa Francis: No matter what color the dress actually is, it's going to sell out!