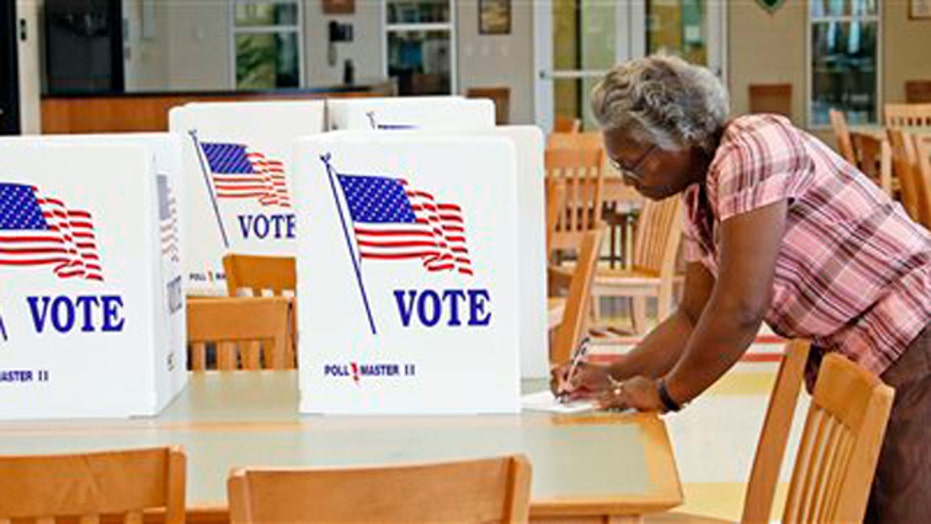 A look at the big races across the country

This is a rush transcript from "Hannity," June 24, 2014. This copy may not be in its final form and may be updated.

MEGYN KELLY, HOST: Breaking tonight. We are tracking a nail biter of a Senate primary runoff race in Mississippi, that pairs an establishment guy against a Tea Party guy, and whoa! Is it getting interesting? It comes in a season of political surprises where some Americans seem to be telling Washington, they're mad as hell and they're not going to take it anymore.

Good evening, everybody, welcome to "The Kelly File," I'm Megyn Kelly. In recent weeks, we have seen political history being made as several big name incumbents have been voted out. Tonight's cliffhanger features a guy who first went to Washington when Nixon was in the White House. Yours truly was just a little one year old baby.

Right now, six term incumbent Senator Thad Cochran with, well, 55.2 percent of the vote to the Tea Party challenger Chris McDaniel's 44.8 percent but it is early still. We are still getting these results. And as you can see, there's just eight percent so far.

We are also keeping a close eye on New York's 13th Congressional district, that's where Democrat Charlie Rangel is in a tough fight for his 23rd term on Capitol Hill. Charlie Rangel, did you know he's 84 years old? He's 84. And fighting to hold on to his job.

The polls closed just a moment ago, his challenger is state Senator Adriano Espaillat. And the polls are just closing west, out west in Colorado as well where the voters are picking Republicans and picking a candidate to challenge that state's Democratic governor in November, the big name to watch there is Tom Tancredo, the Democrat incumbent is favored in that race.

Joining me now Bret Baier who is the host of "Special Report" right here on FNC and Chris Stirewalt is the Fox News digital politics editor. Charlie Rangel's 84? OK. That's not really the headline. But Thad Cochran -- you are the same age as I, we were one-year-old babies in our cribs when Thad Cochran first went to Washington -- and now we're old 43-year-olds who may be sitting on the anchor desk when he goes out.

BRET BAIER, HOST, "SPECIAL REPORT": Well, it's interesting. To look at the turnout numbers, that's a good sign so far for Thad Cochran, the six term incumbent senator. He has been trying over the past few weeks since he was forced into this run-off, to cobble together a coalition, Megyn. Some of them may be Democrats, some of them may be moderate Republicans. Some of them may be Independents. Anybody can vote in Mississippi's special election runoff primary here, except the 86,000 Democrats who voted in the June 3rd democratic primary.

And basically Cochran is trying to tap into all of those folks to say, hey, listen, I can take care of bringing federal spending back to Mississippi. And it is so interesting to see this battle, because on the other side, state Senator Chris McDaniel is saying, hey, we don't need more federal spending, we need less. He's obviously the Tea Party favorite.

KELLY: Chris, explain to us why, you know, as Bret's just points out, this is the Republican primary runoff. I mean, normally not the lead story on the Fox News Channel at 9:00 p.m., even on an election primary night. Why is it tonight?

CHRIS STIREWALT, FOX NEWS DIGITAL POLITICS EDITOR: Because I'm a big nerd and you want to indulge me. No, that's probably not why.

KELLY: That's the secret undercurrent of everything.

STIREWALT: That's the secret undercurrent. Yes. No, the reality is. This is a big deal, because it never happens, and you never get to this point. You seldom get to this point. I want you to think about this. Over the last 30 years, there have only been six Senate incumbents period who lost. And only one, that was in 2012, that really lost outright, that was really beat straight up.

KELLY: OK. But that's not the question. What you're saying is, it's so rare, but that begs the question, which is, so why is it happening tonight, I mean, is it this rise of the Tea Party or is it this anti-incumbent, we're sick of these guys that don't listen to us, that kind of thing we saw with Eric Cantor? What is it?

STIREWALT: Well, what would happen if the people who were continually disgusted with Congress, continually disgusted with Washington, what would happen if those people realized they could change that? Oftentimes folks give up, oftentimes the electorates in both sides as well the incumbent always wins, the inevitable always wins. So, just go with that. But when things happen like that Eric Cantor election, when things happen like the toppling of Hillary Clinton in 2008, it reminds people that elections have consequences. And when people are as angry as they are now, in both parties, across the spectrum, when people are this angry, consequences start to be felt on candidates and that makes changed in Washington.

KELLY: This guy McDaniel, Bret, is running as sort of Mississippi's Ted Cruz, which is, you know, proven to be very appealing to a lot of Republicans.

BAIER: Yes, I mean, he's 42 years old. He is -- he says it's time for a new face, new change in Washington. And he's tapping into that overall, not just in the Republican Party, but in both parties as you mentioned, that Washington needs to change, period. You know, Charlie Rangel is basically facing the same thing in New York, looking for his 23rd term. McDaniel has tapped into this fervor from conservatives, and seeing that House Majority Leader Eric Cantor lose to Dave Brat in his district here in Richmond, just down the road, I think that that fired a lot of them up. And you'll see tonight whether they came out in big numbers. Cochran is hoping that he can mobilize everybody else to counter that. And he has thrown everything at it. Senator John McCain was down campaigning. Brett Favre cut a ad. The Republican governor Phil Bryant cut a radio ad. So, he's tapping the establishment.

BAIER: Green Bay, but he was a Mississippi native.

KELLY: OK. So, my husband explained it to me, but it's all a blur now.

Chris, what do these early numbers tell us so far? I mean, if you're Thad Cochran, are you reading anything into this? I mean, so far, it's good for him. But you always look at the counties that are still remaining to come in, whether they would typically favor the other candidate. Where do we stand on that?

STIREWALT: Well, anything could happen at this point and simply because, the turnouts up across the board, not just where Cochran wanted to turn it out. But also, where McDaniel needed to outperform. Because the McDaniel people knew this was coming. And the national conservative groups that have been pouring money into Mississippi knew it was coming too. None of this is a surprise. What's surprising is, that in a runoff, where normally you would see the electorate shrink, the electrate's growing across the state. People are engaged, and you saw the way that people turned out. So it's a jump ball right now, but Cochran has to like a larger electorate. Simply put, the bigger turnout tonight, the better for the incumbent.

KELLY: Now, I want to tell the viewers at the point where, some more conservatives, sort of Tea Party groups have poll watchers at these elections, to make sure that Democrats who voted in the first primary don't vote tonight. As Bret was saying, they're not allowed to. They sort of want to protect their guy, because they assume the Democrats are going to vote for Thad Cochran, the incumbent. And then Thad's side, he's got his own poll watchers who is going to watch those poll watchers and a lot of his poll watchers are Democrats, and so that has the Tea Party folks saying, see, we told you, he's not even a real Republican. It's getting sort of sloppy down there. Guys, back to you, when it's time for cleanup.