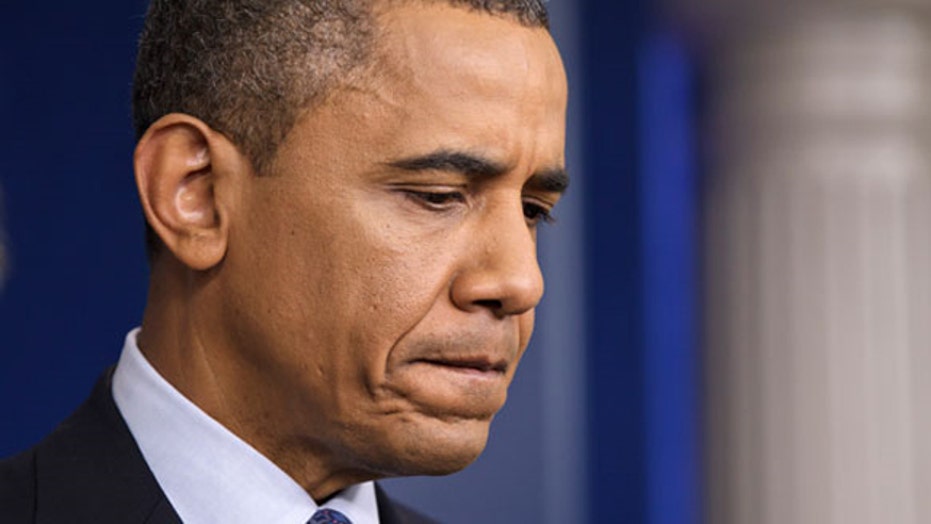 IN FOCUS: When it comes to 'income inequality,' are President Obama's policies helping or hurting?

STEVE FORBES: It has hurt. This is the most miserable recovery in the history of America. Median incomes are lower today than they were 5 years ago. The combination over uncertainty over ObamaCare, a horrific tax code and what the federal reserve has done for the dollar, punk recovery, less opportunity for people to rise up.

RICK UNGAR: I'm not sure that government is the answer when it comes to income and equality. Most people analyze this in ‘do you think Obama's policies produce growth' ‘was he anti-growth'? Growth isn't the issue because it only matters if it is shared. If a company is making $14B in profits this year, makes $20B next year, what's the difference if they don't share the benefit? That's what income inequality is.

RICK KARLGAARD: It's not just the Obama administrations fault; it's the Bush administration's fault too. The cheap dollar policies create financial bubbles. Who can take advantage of financial bubbles, the rich. The poor always have to sell out at the bottom. The regulatory creep that occurred under Bush and has accelerated under Obama has made it difficult to expand in areas where you typically find high wage blue collar jobs in transportation, energy extraction and so on.

MIKE OZANIAN: Under President Obama, the exact opposite happens. One of the areas where Obama has hurt the economy is with small businesses. His investment tax increase hurt small businesses; the tax increase went from 35 percent to 43 percent on passive income. This really is unusual. During expansions, you typically new business startups accelerate. This is the only recovery I have seen going back to the 1930s, where new business start ups have completely flat lined. When you increase tax rates on small businesses you don't get that capital.

ELIZABETH MACDONALD: We see time and again politicians saying ‘we do want to get pro growth economic policies' but then they show up in Washington D.C., they get some kind of Stockholm syndrome where they get locked into these ideas of global wealth taxes that the government can do their crony capitalism and start redistributing all the taxes to create growth and that doesn't work. All net new job creation over the last decade comes from small business startups and they are getting crushed. We are penalizing success.

Private online retailers processing millions upon millions of purchases this week: proof that the private market should fix health care in America instead of the government?

JOHN TAMNY: This is simple; Amazon can do 306 transactions per second. Whereas visitors to healthcare.gov get up in the middle of the night hoping the traffic will be low so they can transact at all. Capitalism provides, it does so in abundance and if you want to fix healthcare at the profit motive to the equation, then remove government.

RICK UNGAR: When Amazon started, it wasn't smooth at all. Jeff Bezos will be the first to tell you how much time it took to work it out. I'm not happy with the healthcare.gov launch. I blame the Obama administration for this; they have shut out some very successful private online companies like ehealth who have been working very effectively for 10 years.

ELIZABETH MACDONALD: We have to stop the administrative white wash in DC about health reform and the fog machine that is working overtime to spin. Amazon processes 3 million a day, that's what the administration needs to float. Health insurance, 3 million into the system by next march meaning young adults.

STEVE FORBES: This gets to all the problems people have with startups. In the private sector, if you don't succeed, you go out of business and you don't get capital anymore. You don't have taxpayers you can put your fingers in their pockets and get more money on. Why not have private enterprise in healthcare? Why not have safety nets? Let people who know what they are doing turn scarcity into abundance instead of socialism.

MIKE OZANIAN: Things like plastic surgery which are typically not covered by insurance they have improved in quality over the past 10-15 years and prices have plummeted. Ted turner got CNN up and running in 1 year and he had billions of dollars of capital riding on that, his whole reputation. ObamaCare.gov has had 5 years and they still can't get it right.

SABRINA SCHAEFFER: It's not simply that the private sector does it better than the government, it's that they are constantly looking for ways to improve to be more innovative, more effective. When looking at Cyber Monday sales from this year, they increased by over 17.5 percent over last year. They were making it even easier to purchase online through their tablets, through their phones. This is something that would completely allude the government. The idea that you can make something more efficient. It's because we don't have that profit motive.

White House changing laws passed by Congress; is that a good plan to fix costly laws or is it going against the intentions of founding fathers and our Constitution?

RICH KARLGAARD: Obama is making unilateral changes to a piece of legislation. The problem is where is the check and balance on that? Where are the limits? What's to prevent him from changing the law entirely? Obama has gone overboard on this.

RICK UNGAR: I appreciate the professor bringing the point up, however this is something that has been going on throughout our modern history, this grab for power between congress and executive. In this case, if you read the ACA this does permit these things to be done by the executive branch. There is discretion. We aren't picking the best example to pick the fight.

STEVE FORBES: It's wrong and there is nothing to stop him. We are the USA not Venezuela. They make the law up as they go along. If he wants to change it, go to congress and get the legitimacy for it. You don't just say I'm not going to force this part of the law, it becomes inconvenient.

SABRINA SCHAEFFER: I can remember a time when America was a time where he could brag and were a nation of laws, not just full of willful men and women who made up the rules. When you elect the superstar, he suddenly doesn't think he is there to be the president.

ELIZABETH MACDONALD: Bad. Turley is saying Obama was doing this in overdrive. If government won't uphold the laws it enacts, why should taxpayers abide by them? It's corrosive. Every president from Ford through Clinton opposed 250 laws, but still upheld them. This president is way worse and not enforcing the laws.

JOHN TAMNY: One of the most animating features of the Constitution is separation of powers. Presidents can't send our troops into war can't appoint judges, can't change laws without consent. Presidents going back to Woodrow Wilson have been abusing executive power. It's a bipartisan problem and its time to reign in both sides. This isn't just an Obama thing.