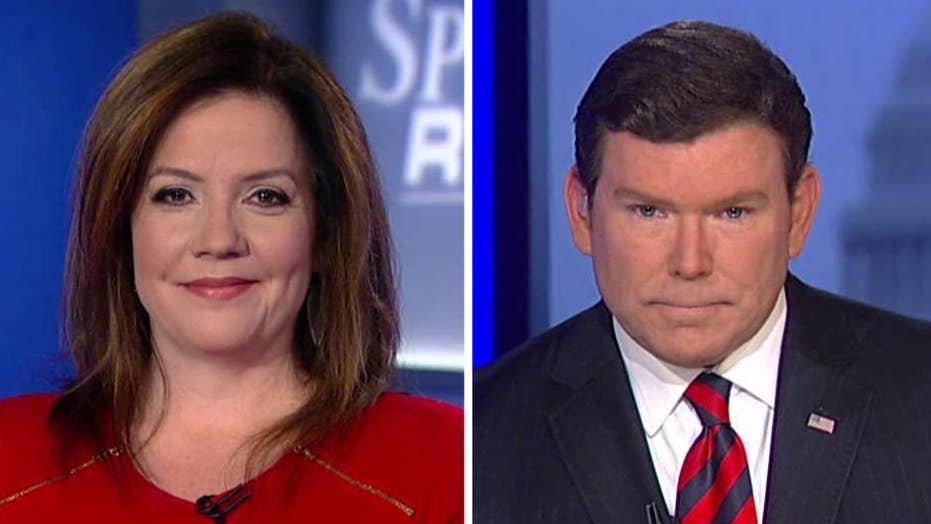 This is a rush transcript from "Special Report with Bret Baier," April 9, 2018. This copy may not be in its final form and may be updated.

BRET BAIER, ANCHOR: Back to our panel: Tom Bevan, Real Clear Politics co-founder and publisher; Mollie Hemingway, senior editor at The Federalist, and Mike Allen, co-founder and executive editor of Axios. Mollie, what perked your ears on all of that.

MOLLIE HEMINGWAY, THE FEDERALIST: My colleague Mike Allen here cheerfully said that Mueller is unafraid. And it is worth remembering he was also unafraid when he botched the anthrax investigation by targeting the wrong person, a blunder that cost taxpayers quite a bit of money.

I think at this point there is definitely a burden of proof that the FBI, Department of Justice, and special counsel have to meet. President Trump talked about some of the conflicts of interest that are there. And Rosenstein actually has quite a few of them, not just what he was cited for, the letter recommending the firing of Comey. He also was probably the guy who signed off on Andrew McCabe's ridiculous investigation into whether Sessions was a Russian spy. And he also is overseeing this U.S. A.G. who is investigating FISA abuses of which Rosenstein was also involved. There are plenty of conflicts going around. It would be good for the media to be thinking a little bit more about these conflicts. The conflicts in the special counsel with so many Democrats, all the problems that we've seen arise out of what's been able to be pulled there.

And it's worth remembering that Congress has been requesting for a long time just to find out how did this investigation into Russia start. And the Department of Justice and the FBI are absolutely stonewalling and obstructing that.

BAIER: Just today 3,600 documents going to the House Judiciary Committee. So it's important to realize they are a lot of moving parts here on a number of different investigations both of the FBI and DOJ and obviously of whatever Special Counsel Mueller is looking into.

MIKE ALLEN, AXIOS: Yes, and the president there mentioning a million documents. I thought that was new. There's so much news these days. They've said 1.4 million documents have gone from the White House to Mueller.

But just to hit pause for a second on that amazing moment that we saw play out, the live play out. That will be picked over for years. Look at the president's body language. Listen to his tone. Listen to his repetition, using "disgrace," "disgraceful" again and again, saying twice we will see what happens. John Roberts, so good on what happens when he says that about you.

So the president fighting. And this really plays into what he's been trying to do for a while. We have seen the discrepancy in his lawyers' strategy and his. The lawyers have wanted to cooperate, told him, assured him that it would pay off for him to cooperate. The president has been resisting. He's been wanting to fight, he's been wanting to discredit the Mueller findings with his base, and this does it big time.

BAIER: It's interesting to think about what exactly, and we don't know what Mueller may have found that referred to the U.S. attorney in New York. But having the politics of all of this swirl around at the same time. Meanwhile, tom, this is one week ahead of Jim Comey's book that's coming out. It is as these investigations are going on on Capitol Hill, Mueller has to know that he crosses a line in at least the president's mind as he's negotiating with the president to sit down by doing this. So you wonder how you get to that point.

TOM BEVAN, REAL CLEAR POLITICS: Yes. I thought the president's speech was amazing. It was greatest hits. He went through Comey, Hillary Clinton lies, Jeff Sessions' recusal, Mueller conflict, Rosenstein. It was a recitation of the greatest hits.

Obviously he's upset, and as Brit Hume mentioned earlier, the only crime that we know of that might be connected with this right now is an FEC violation. So over here, Trump is starting with collusion with Russia. And now we're looking at a private attorney of the president being raided by the FBI, no knock raid. As I said earlier, it's a pretty dramatic increase in the stakes of this investigation. And I would not be surprised.

The other thing everyone has told Trump not to do is to fire Bob Mueller. And I suspect he might be going on his own gut now and thinking, you know what, I've been right on this all along. I might want to do it.

HEMINGWAY: And there is that subtext too that the president talked about which is there has been an active resistance movement since the moment he was elected. And they go from item to item in an attempt to bring him down. So that is part of the context there, and he, unlike a lot of president, he is so transparent in how he speaks he talks about what is actually going on in this moment. But it's worth people thinking about as they do their resistance, which is your right as an America citizen to do, whether it's worth bringing instability at this time for some of these issues going on.

ALLEN: One more pivotal thing. The president quadrupling down on firing Comey. Remember Steve Bannon said that was the biggest mistake in recent political history. The president saying twice there he was right, and that fits with what you were saying about how he is now feeling about Bob Mueller.

BAIER: Although referencing Rod Rosenstein's letter saying this is what should happen, when that was written after and how and when.

HEMINGWAY: The entire question I think right now is either there is treasonous collusion between Trump and Russia or there is an FBI and Department of Justice that is completely out of control.

BAIER: You think it's one of the two?

HEMINGWAY: I would love to see any evidence for the first claim that we have been so much time on. We have a lot of evidence to support the second claim.

BAIER: The Washington Post at this hour saying the raids dealt with FEC violations and bank fraud. We have no way to confirm that. If that's possible, and it's separate, it seems like it separate from Mueller and he is referring something that he finds. This is all speculation until you find out what they are looking at.

BEVAN: Right. As I said earlier, when you have breaking news night like this, there's the fog of war. A lot of questions are raised. We don't have a lot of answers to them. It will become clear in the coming days and weeks exactly what, again, who proved this? How did the process go? How did we end up -- it's unusual for Mueller to bounce this up to the district attorney in New York or have Rosenstein giving their approval to do that? And, again, what was he after? What did he find? What was he looking for? And how is that connected to Trump in any way or if it's not. Is Michael Cohen just collateral damage in this whole affair?

ALLEN: Bret, that Washington Post bulletin, a single source, but from a reliable reporter, and a reminder that this investigation is moving so much faster than a Special Counsel usually does and faster than we thought this was moving.

BAIER: All right, in the other politics, here, you heard him, the president talk about military funding, funding for shoring up the military as he considers military action. Now he is trying to get Congress to rescind some of the $1.3 trillion spending bill that he signed and actually threatened to veto it at one point when they were going to pass it, and the concern about the CBO projections which we're going to into from Capitol Hill, all of this playing on the same day.

HEMINGWAY: Yes, and rescission is this idea of rescinding some of that spending is important not just because Republicans like to think of themselves as fiscally responsible and this $1.3 trillion omnibus was anything but fiscally responsible. The base of the party is very upset with that kind of spending spree. And there is an option where you only need a simple majority in Congress and the Senate to rescind some of that bloated budget, and leaders in the House and Senate can suggest to Donald Trump what he suggests they rescind and get those votes through. That would be not just good for the fiscal health of the country, but it's absolutely important for a base that is wondering why have Republicans in each branch of they are not going to actually govern as they claim they will?