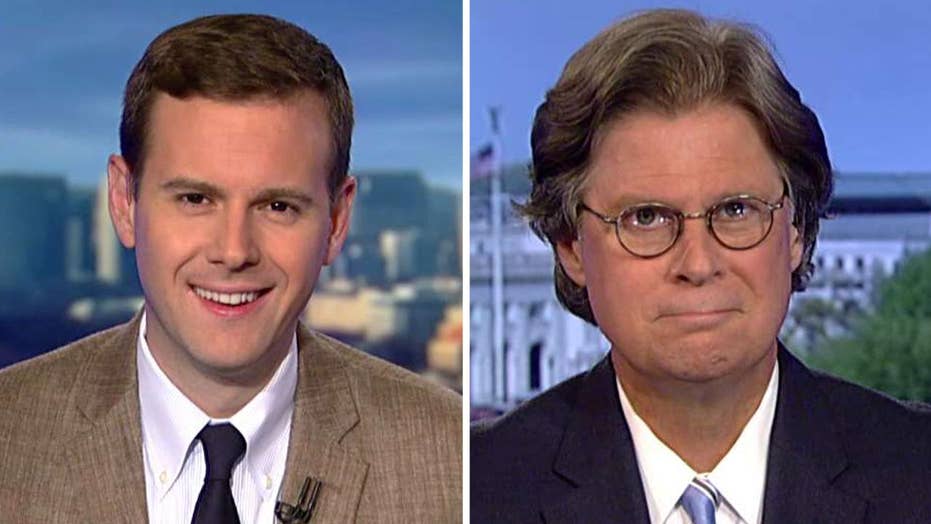 This is a rush transcript from "Special Report with Bret Baier," August 23, 2017. This copy may not be in its final form and may be updated.

PRESIDENT DONALD TRUMP: Our country needs to unify, to heal, and to remain one nation under God. We cannot remain a force for peace in the world if we are not at peace with each other.

You've got to go to 51 votes. And if they don't do that, they are just wasting time.

Nobody wants me to talk about your other senator who is weak on borders, weak on crime.

We are not defined by the color of our skin, the figure on our paycheck, or the party of our politics. We are defined by our shared humanity.

BRET BAIER, ANCHOR: Those three speeches happening within 48 hours, three different speeches. Some analysts saying perhaps two different presidents making two different messages. This is there is some pushback and some battles between the Republican Party. The president tweeting out about Senator Jeff Flake "Phoenix crowd last night was amazing, a packed house. I love the great state of Arizona. Not a fan of Jeff Flake, weak on crime and border!" Of course he is the sitting incumbent senator there.

Politico has a piece saying "Before taking the stage in Phoenix, the president huddled backstage with state treasurer Jeff DeWit and former state GOP chairman Robert Graham. Both are considering running against Flake." We have a picture that shows the meeting right before he went on stage out there in Phoenix. And that obviously showing some different takes on the situation on the reelection. Senate Majority Leader Mitch McConnell is backing the incumbent Jeff Flake.

Let's bring in our panel: Guy Benson, political editor at Townhall.com; Susan Page, Washington bureau chief at USA Today, and Byron York, chief political correspondent at The Washington Examiner. What do you make of the speeches and the messages and the interpretations, Byron?

BYRON YORK, THE WASHINGTON EXAMINER: After the very presidential Afghanistan address Monday night, primetime address, commander-in-chief, matters of war and peace, I think his staff and a lot of people were worried that he would just go rogue in Phoenix. And that's exactly what he did.

But I have to say, if you've watched a lot of Trump speeches, especially his campaign speeches, this was very characteristic. It was a classic Trump sandwich. He starts off on message, talking about unity and other stuff. Then he just goes offer 45 minutes and goes all over the place. He re-litigates Charlottesville. He attacks McCain. He does all sorts of stuff.

And then at some point he remembers, oh, I've got to talk about jobs again. And he gets back on script for the rest of it. That is classic Trump. And I didn't actually see that much other than the news about threatening to shut down the government if he doesn't get funding for the border wall, I didn't see that much that was new about it.

BAIER: Which did raise some eyebrows. Let's take a listen to that and hear the House speaker.

TRUMP: Now the obstructionist Democrats would like us not to do it, but believe me, we have to close down our government. We are building that wall.

SPEAKE OF THE HOUSE PAUL RYAN, R-WIS.: I don't think anyone is interested in having a shutdown. I don't think it's in our interest to do so. While we work on doing what we actually said we would do and what we've done already in the House and what we need to do, which is to control our border. So I don't think you have to choose between the two.

BAIER: And as predicted, Susan, when Congress, the leadership comes back, they are going to go to the White House, including Senate Majority Leader Mitch McConnell and the House speaker and talk about the way forward on these items. But that kind of concerned some on Capitol Hill.

SUSAN PAGE, USA TODAY: And perhaps trying to get a vote from Senator Flake on some of the issues coming up. I love the phrase "Trump sandwich." And just to go back to that buffet item, you know, we saw that the previous week too because the president's initial comments about Charlottesville took one tone, then he came out Monday and read much more statesmanlike, conciliatory words. And then on Tuesday he did that remarkable press conference which was, again, totally off message.

And so which is the Trump people should believe is the real Trump? I would say it is the filling in the sandwich, not the bread, because those are the moments when President Trump seems to be really speaking what he means, what he really thinks. And that will be the President Trump I assume that ends up negotiating with Mitch McConnell and others on some of the big issues that are coming in September with Congress.

BAIER: Three Republican lawmakers on the same kind of analysis of these speeches.

REP. TOM COLE, R-OKLA.: We saw two different presidents in the last two nights. I thought the president did an exceptional job on Afghanistan. I think we would be better served if that's the president we saw more often.

REP. ADAM KINZINGER, R-ILL.: I wish he would go after Vladimir Putin and Kim Jong-un as much as he is the Republicans.

RYAN: The president feels that is the best strategy that works for him. I would say I think it's important that we all stay unified as Republicans to complete our agenda.

BAIER: But Guy, how many times have we heard that this is going to change or this is the guy we wish was in the oval office. These are Republicans who are trying to figure out how to deal with the guy they saw in Phoenix.

GUY BENSON, TOWNHALL.COM: He's not going to change. This is who he is. This is the man who was elected president. I really struck me watching the media response to the speech in Phoenix, people shocked, people fainting. Can you believe it? Yes, I can believe it. Where have you been for the last two years? If you are orbiting the earth in a satellite somewhere with no access to any information and you parachuted into Phoenix last night, yes, that would have been a very bizarre political performance. But if you have been a sentient human being for two years, it is exactly what we've come to expect because that's Donald Trump. That is the president, and whether you like it or not, people elected him knowing that is precisely who he is.

YORK: But there were legitimate points in the off script.

YORK: We he was talking about Republicans who couldn't get their act together after seven years of promising to repeal Obamacare. He was absolutely right about that. Some of his attacks on the press, same old thing. But some people in the press afterwards came out as if prompted by the president and went way over the top in their commentary and suggested he was suffering from dementia or was psychotically demented.

BAIER: And part of that coverage included the former national intelligence director, who said this.

UNIDENTIFIED MALE: Are you questioning his fitness?

CLAPPER: Yes, I do. I really question his ability, his fitness to be in this office. And I also am beginning to wonder about his motivation for it. Maybe he is looking for a way out. I worry about, frankly, you know, access to the nuclear codes.

BAIER: That's quite something, Susan. For a guy who obviously was called up by Congress for lying in testimony, but, you know, respected in his intel field to say what he said there, really something.

PAGE: Pretty provocative, although it's only one step further than Senator Corker took a few days ago, the Republican chairman of the Senate Foreign Relations Committee, saying he questioned -- he wasn't sure if President Trump had the -- what was the word he used -- the stability that was necessary for the job. So Clapper went pretty far there, but that is the debate that you here among a lot of Democrats but also among some Republicans these days.

BENSON: Yes, I am sympathetic to the question or people who asked the question, is Donald Trump fit to be president. I had my doubts about that which is why I was vociferously opposed to him during the Republican primary in particular. But we have litigated that exact question in a primary, in a general, and then he was elected. So this is not new news.