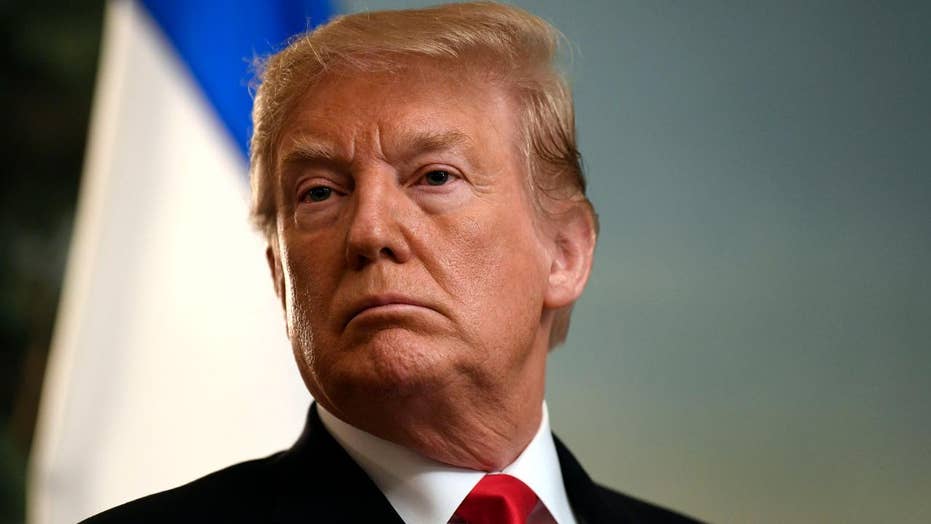 This is a rush transcript from "Special Report with Bret Baier," March 25, 2019. This copy may not be in its final form and may be updated.

PRESIDENT DONALD TRUMP: It lasted a long time. We are glad it's over. It's 100 percent the way it should have been. I wish it could have gone a lot sooner, a lot quicker.

HOUSE JUDICIARY COMMITTEE CHAIRMAN JERROLD NADLER, D-N.Y.: President Trump is wrong. This report does not amount to a so-called total exoneration. Special Counsel Mueller was clear that his report, quote, "does not exonerate," close quote, the president.

BRET BAIER, ANCHOR: There will be much to mull over in coming days about the Robert Mueller report and the attorney general's four-page letter about it. But it's clearly a political win and a legal win for the president and his team. The Mueller report by the numbers, 19 lawyers, 40 FBI agents, intelligence analysts interviewed 500 witnesses, issued more than 2,800 subpoenas, executed nearly 500 search warrants. In the end, 34 individuals and three companies were indicted on 199 charges, more than two dozen of them Russians in an Internet farm. In total, the 675-day investigation cost more than $25 million.

Let's bring in our panel: Kimberley Strassel, a member of the editorial board at the Wall Street Journal; Charles Lane, opinion writer for The Washington Post, and Victor Davis Hanson, a senior fellow at the Hoover Institution and author of the new book "The Case for Trump." Victor, first to you. Wrap up this weekend and the news about the report as you see it.

VICTOR DAVIS HANSON, HOOVER INSTITUTION: Well, I think we have to realize that if Hillary Clinton had just won the election and she had not hired a foreign national to collect dirt on her campaign opponent, we wouldn't be talking today. The entire collusion narrative grew out of the disappointment of trying to explain the inexplicable, why she lost, and then the dossier transmogrified from insurance to help the landslide into a way to abort the Trump presidency.

Second thing, I think they thought collusion was separate from all these process claims and obstruction. And once the collusion narrative, I think most people thought didn't exist, once it failed, how can you really obstruct justice for a crime that didn't exist? If Donald Trump said something about the futility or the waste of the collusion narrative, it would be seen post facto as wise jurisprudence, trying to warn people don't to do something stupid. It's not obstruction to do it.

Finally, everything that begins badly ends badly, Bret. The idea that Rod Rosenstein, who had signed one of the FISA court writs that was misleading and had given the rationale to fire James Comey and been in this tragicomic circus with McCabe right before Mueller was appointed, some kind of palace coup, was going to be disinterested in a way that Jeff Sessions was not as the overseer was crazy.

And then finally, when this team was appointed, the left and the never- Trump right, they went giddy. It was the all-stars, the dream team, the untouchables, the hunter-killer team. The reason they did that is that Robert Mueller didn't exercise just basic caution. He could have just said whatever the law, the protocol is, I want an equal mixture of conservative and liberal lawyers. I want to make sure that nobody on this team has given either to the Trump campaign or to the Clinton campaign. I want to make sure that none of you on government devices, if you were working for the government, has said anything pro-Trump or anti-Trump.

And then finally, he could have said, just don't -- I don't want anybody in my team that's donated to either campaign. Had he done that at the very beginning, it would have been different. Now he has got a reputation of a Captain Ahab or maybe Inspector Javert right out of "Les Miserables."

BAIER: Chuck, I referenced it with Brit earlier, but the former CIA director John Brennan had some interesting things just days ago to say about all of this, and then talked today on MSNBC. Take a listen.

JOHN BRENNAN, FORMER CIA DIRECTOR: Friday is the day that the grand jury indictments come down. I don't think Robert Mueller will want to have that dramatic flair of the Ides of March when he is going to be delivering what I think are going to be his indictments, the final indictments.

I don't know if I received bad information, but I think I suspected that there was more than there actually was. And I am relieved that it's been determined that there was not a criminal conspiracy with the Russian government over our election. I think that is good news for the country.

BAIER: Chuck, I said earlier the legal threat is not done for the president with the Southern District of New York and the investigations on Capitol Hill. There will be a lot of battle over what obstruction means on Capitol Hill. But your thoughts?

But I do agree with him that it is, to the extent we have now shown there was no criminal conspiracy, that ought to be something that everybody can agree on is a good thing. It is not a good thing that Russia did attempt to distort, disrupt, however you want to call it, interfere with our election through using social media and accentuating the divisions in our country.

And I guess I have to disagree with what Victor Davis Hanson said, which is I don't think Mueller has -- I don't think Mueller's reputation has been damaged here, and I don't think the fact that his team was, perhaps, filled with a bunch of people who were supposedly Democrats is in hindsight a black mark. If anything, that fortifies the president's position right now, which is like even this guy who was Inspector Javert couldn't find collusion on him.

The dangling piece here is the no exoneration on obstruction. But I think the Democrats have to think really carefully about pursuing that, because that gets into relitigating the whole Comey firing, which is ultimately supposedly the source of the obstruction, and that leads down a very, very deep rabbit hole. And I think Speaker Pelosi has said we are not going to impeach. And if you are not going to impeach, what's the point of pursuing that obstruction. So that's a tough one for them.

BAIER: Kimberley, we found out today that the attorney general found out three weeks prior to the report coming out that Mueller was not going to reach a conclusion on obstruction. That surprised both Barr and Rosenstein. We heard Alan Dershowitz and others say they should have, yes or no, come to a conclusion instead of putting things in that report. Your thoughts? We have got the other panel after this to talk about it as well.

KIMBERLEY STRASSEL, WALL STREET JOURNAL: Yes, look, I do think there is some interesting questions about how Mueller handled this. On the one hand you could say that tossing it to the attorney general was at least putting that question in the hands of someone with some political accountability. And then obviously one of the knocks against the special counsel is that he is not necessarily politically accountable. Nobody elected him. Nobody confirmed him. On the other hand, you can wonder if it was a bit of a wimpy thing to just toss that off to the A.G. and leave it with him.

But on the broader point, look, I think Chuck makes a good valid one. Legally from an obstruction perspective, the president has a win here, because no one is going to pursue from a position of authority obstruction charges. Now, if Democrats want to make the political case for why that's wrong, they are welcome to. But, again, even in light of this news that you just mentioned, one of their complaints, for instance, was that Barr had rushed to judgment on the obstruction question. Well, that's clearly a false narrative because he has been in possession of this information for three weeks. Moreover, we found out that he consulted with career officials at the Office of Legal Counsel in making the decision not to pursue obstruction.