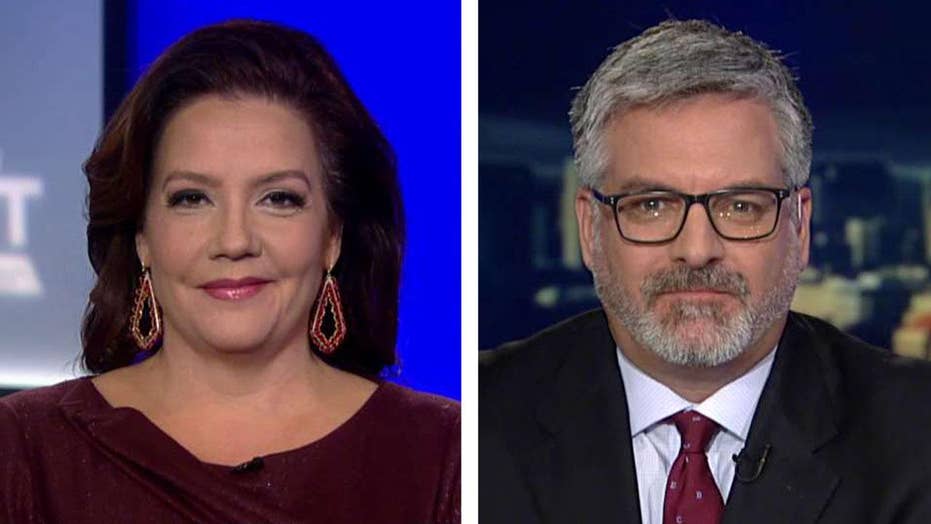 This is a rush transcript from "Special Report with Bret Baier," December 10, 2019. This copy may not be in its final form and may be updated.

Bret Baier, anchor: Going to bring in our panel early tonight: Steve Hayes, editor of The Dispatch; Mollie Hemingway, senior editor at The Federalist; and Steve Clemens, editor at large for The Hill. A lot of editors on the panel tonight.

Mollie, let me start with you. And we're going to start with this Barr interview, couple of them today. Pretty striking if you look at what he said in laying it out and how Washington perceived, at least, the IG report initially.

Mollie Hemingway, The Federalist: Right. Sometimes it feels like Attorney General William Barr is one of only very few adults who are in Washington, D.C. I think that he laid out a case in multiple interviews today, looking at the actual facts in this inspector general report, looking at the dozens upon dozens of errors that all happen to be in the same direction, harmful to the Trump campaign. And he is talking about this in such a systematic way. This isn't just about the, frankly, pretty narrow thing that the inspector general looked at; the violation of civil liberties for Carter Page and other things attendant with the surveillance of the Trump campaign. It's really about a whole scheme of operations. One of the most interesting things in this inspector general report that the FBI and Department of Justice knew, by January 2017 that the dossier was complete rubbish, complete unadulterated rubbish. We learned this yesterday. For three years, these departments leaked out information, making it seem like they were taking it seriously. They started a special counsel probe. They continued to get warrants to spy on Trump campaign affiliates. This is a scandal, the greatest scandal of this generation. And whether people want to wipe it away or not, this is something serious that needs to be dealt with.

Bret Baier: To your point, one of the things he talks about, the attorney general today in this interview with ABC and then with the Wall Street Journal, Steve, is this Steele dossier and how it's used in this process. Take a listen here.

Attorney General William Barr: When I finally got around to talking to him, he said, "I don't know what Steele's talking about. I didn't tell him this stuff." At that point, it was clear that the dossier was a sham, you know, tell the court, and they continued to get FISA warrants. They actually filed with the court a statement saying, "We talked to the sub-source, and we found him credible and cooperative." And they put that in to bolster –

Gerard Baker, The Wall Street Journal: When the sub-source –

William Barr: When he -- what he was being truthful about is that the dossier was garbage. I mean, the IG says that the explanations he received were not satisfactory.

Bret Baier: When asked about the IG finding that there was no political bias, his essential answer is that he didn't have the whole picture, couldn't talk to all the people. Your thoughts on these statements today.

Steve Hayes, The Dispatch: Well, it's interesting that he's choosing now to say that. If I were the attorney general, I would be waiting until the results of the Durham investigation comes in when -- when with a wider scope, those allegations might in fact be borne out. But I think what you've seen over the past 30 hours in Washington, D.C. is this "choose your own reality" moment that we are at in American politics, where you have people on one side cherry-picking information, presenting it in a comprehensive way, and ignoring the things that cut against the arguments they've made for the better part of a year. And on the other side, you have the same kind of behavior. I think the bottom line here is, none of the wildest conspiracy claims that the president himself made and a lot of his supporters made were borne out. But at the same time, anybody, including James Comey, who's pretending this is a good report for the FBI and the Trump administration, is sorely mistaken. And Mollie's right, that particularly in the process on the FISA, the Carter Page FISAs, repeatedly, there were a number of errors. And I'm using "errors" purposefully, but with some irony --

Bret Baier: To a small point --

Steve Hayes: -- all went in the same direction.

Bret Baier: They all go the same way.

Bret Baier: Mollie, I'm going to come back to you. Steve, hold on. Chris Wray, the FBI director on kind of the other focus here in another interview yesterday.

FBI Director Christopher Wray: The inspector general did not find political bias or improper motivations impacting the opening of the investigation. There are a number of things in this report that, in my view, fall well short of the standard of conduct and performance that we and that I expect of all our employees. And we're going to be taking a number of corrective steps to address that."

Bret Baier: Obviously, the president said, "He's not reading the same report I'm reading,” questioning his FBI director that he -- he put in this position. I think tomorrow is going to be fascinating with the IG testifying in front of the Senate Judiciary Committee.

Steve Clemons, The Hill: Well, actually, I mean, this report reminds me a lot of the Mueller report, that people jumped very quickly to decide in a binary way that it was either confirming their views or not confirming their views. I went and I read a lot of this report today. It's very long, and the complexity of it is there. And what you see, to both what Steve and Mollie said, is a messiness in the process, but that the predicate of opening the investigation was not out of the ordinary for the FBI and that there was not political bias in that -- in that step. And I think this is -- this is important. And what we're seeing -- and I would, you know, in a friendly way, disagree with Mollie. I don't think Attorney General Barr is the adult in the room. Attorney General Barr is predetermining, because of what bias he's showing, where Durham, the next report may go, according to his lines, and also showing the American public that it ought not wait to evidence or weigh the -- this is report is damning in many ways of what the FBI did and how it handled it. But it gave them cover and -- and said the beginning of the investigation was not improper.

Steve Clemons: And I think it's for us to look at it in the entirety.

Bret Baier: But I guess the question is -- and this is to Mollie's point -- if the AG is sitting there watching all of this coverage, watching --

Bret Baier: -- everything that has happened over the last two and a half years and saying, "We're getting it wrong," because he knows something we don't know -- let me play another soundbite. This is from the NBC interview with Pete Williams.

William Barr: There has to be some basis before we use these very potent powers in our core First Amendment activity. And here, I felt this was very flimsy.

Pete Williams, NBC News: Based on what you know so far, is it still -- do you still stand by your statement that the campaign was spied upon?

William Barr: Oh, clearly spied upon. I mean, that's what electronic surveillance is. I think wiring people up to go in and talk to people and make recordings of their conversations is spying. I think going through people's emails, which they did as a result of the FISA warrant, they went through everything.

Mollie Hemingway: I'm probably one of the few people who's actually read the 430-page report.

But he -- it outlines such tremendous amount of spying, electronic surveillance, the use of confidential human informants, that were placed on people in the campaign. It's of no matter that it wasn't in the campaign. Two years ago, though, you had competing memos come out. You had Devin Nunes say that there were problems with the FISA problem, that that was abused. And you have a response memo from Adam Schiff, who's now leading the impeachment effort. Never Trump media and liberal media completely disparaged the Nunes memo and completely supported the Schiff memo. And they were utterly humiliated by that, by what came out in this report yesterday. Every single thing in the Nunes memo was shown to be true. If anything, it underreported the problems with the FISA process. And meanwhile, things that were claimed by Schiff, that people took seriously, that people accepted uncritically, were shown to be false. They said there were no material omissions in the FISA warrants.

Bret Baier: And that the dossier was okay.