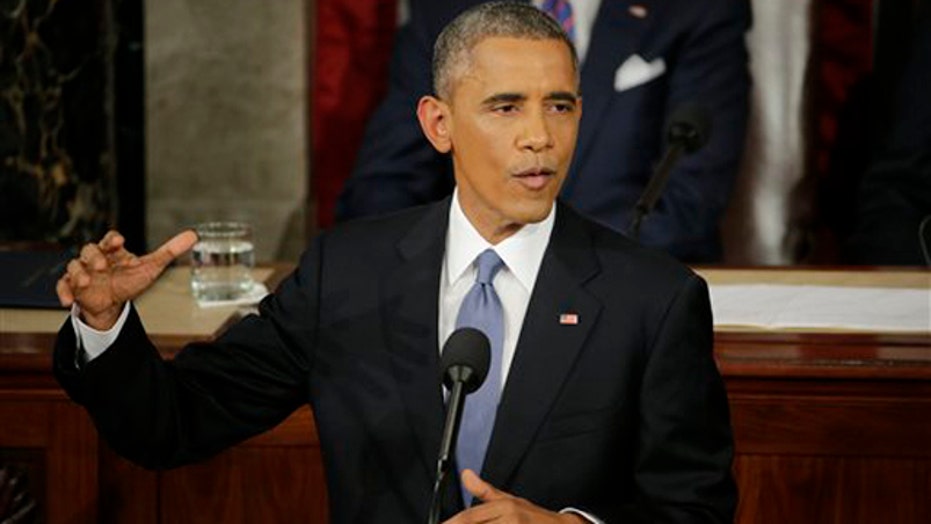 President sounds defiant tone at State of the Union

Charles Payne: Bill Clinton said I want a legacy of achievement that will be validated by the scoreboard. Economic, a scoreboard of what Washington can get down. What President Obama is doing is saying hey, as long as I win, as long as I can convince the American public I'm the better choice, say it was a past president in a mean Congress, maybe that's the new paradigm in Washington where it doesn't even matter if you get anything done because obviously, that's the path he's going on.

Jamie Colby: Felt like it was inside voice. He might have been thinking, but maybe he shouldn't have said it. What happened to a little bit of humble pie? Remember, it was a billion dollar race and that money could have gone a lot of places. I was a little surprised that he would say it out loud.

Adam Lashinsky: But I'm actually coming around to agreeing with you, Neil. I think overall, the speech was not conciliatory enough. Within a couple of day, Jack Lew was offered the treasury secretary, was offering to work with Republicans on corporate tax, which is an important issue, so it's not like there's no compromise here. But I wish the president had been a little more conciliatory in his address.

Ben Stein: He was on the ballots in the big way in the midterms. He is not Clinton. Clinton for all his faults was a conciliator. He was a man who wanted to get things done. Not particularly idea logical. He wanted to do the best job he could for the eight years he was there. Mr. Obama occasionally lets that slide; inside him is a powerful left-wing agenda. He wants to get it out there. He wants his bribe, bribe, bribe the voters, possible democratic voters as much he can before he leaves office. He is not a guy really responsible for the whole country.

CALIFORNIA NEWSPAPER UNDER FIRE FOR USING TERM "ILLEGALS" IN HEADLINE

Ben Stein: Political correctness, you can't call thing by its name. They're illegal aliens. It's like saying a bank robber is not a bank robber. That doesn't mean they're not fine people.

Charles Payne: With the Redskins or something like that. You break into my house, you're an undocumented visitor. If you're in the midst of doing something that's illegal. But the pc crowd keeps winning and winning. The more you can win these kinds of battles, the more you win, hey, not enforce the laws It's not race. It's about the individual. By the way. You weren't invited, you came and broke the law, you're here illegally.

Jamie Colby: It's a head scratcher for me because as an attorney -- if they're not illegal, what are they when they become legal? Did I lose you?

Adam Lashinsky: When someone breaking into your home, Charles, they're a burglar. Many illegal aliens in this country are in the process of having their status reevaluate by the president of the United States.

Jamie Colby: Right now, when you inherit something, you pay a capital gains tax when you sell it. Based on the base of what it was worth when the person who gave it to you passed. What the president wants to do and it could have been much worse because early predictions of the state of the union speech have more taxes, more dollars to be raised Now, you take it at the basis or cost of when they bought it which indicates a strange inheritance could be in the 1800s, 1900s. I don't know how you'd come up with a cost basis of a sieve war gun. In many cases, they're crazy, unique, weird inheritances. But the problem is people who are farming, ranching, living paycheck to paycheck, one of our heirs had cancer, he wildfire an out of work actor and it saved his life. That's on the premier episode. That's lot of money. They're forced to sell.

Charles Payne: The bottom line is that it's part and parcel to the president's goal of social justice and essentially, what we're saying is that because things are so unfair back in the day when someone was able to buy this house or that Civil War gone, 60 years ago, your parents had an easier time of getting a loan than I did. That's what I think President Obama is framing this as social justice. How do we make it right going forward? If we can get the people so far in front because of past atrocities of this evil nation and we can bring them back and get everyone back to the same starting line.

Ben Stein: Mr. Obama and his fellow leftists, have not learned that you do not make the poor rich by making the rich poorer. That's a basic fact. It gives psychological satisfaction to raise the inheritance tax. It gives him sense of satisfaction to the envious. There is no economic mechanism saying the only economist on the panel by which raising taxes on the rich makes the poor richer.

Adam Lashinsky: I'm not sure why we're doing this now. The way you explained it, it sounds reasonable to me.