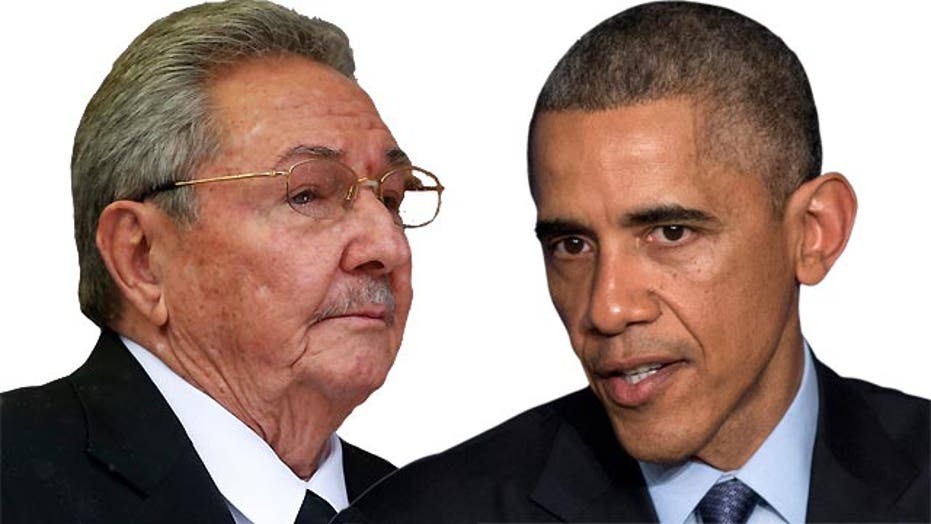 James Rosen and Carl Cameron on the Taliban attack in Pakistan, relations with Cuba and the President’s immigration actions

O'REILLY: "Washington Beat" segment tonight. We have plenty to talk about, including President Obama normalizing relations with Cuba, and the Taliban slaughtering 132 Muslim school children in Pakistan. As I said last night, that horrendous mass murder is Pakistan's own fault. It could have allied with the USA and NATO in fighting the Taliban. It did not, preferring to make deals with the devil. Yesterday White House spokesperson Josh Earnest actually parsed the Taliban.

Joining us now from Washington, ace reporters Carl Cameron and James Rosen. So Rosen, tell me about Josh Earnest. There's a difference between the Pakistan Taliban and the Afghan Taliban? What is that?

JAMES ROSEN, FOX NEWS CHIEF WASHINGTON CORRESPONDENT: When my Fox News colleague Ed Henry questioned Josh Earnest about this horrific school attack in Pakistan, the White House spokesman was quick to note that it was the Pakistani Taliban also known as TTP that carried out this attack. The reason that Earnest made that distinction is because Ed in forming his question had asserted some linkage between this horrific event and the U.S. drawdown in Afghanistan. And Earnest was trying to delink this horrific event from the state of affairs that we're going to be leaving behind in Afghanistan.

Bottom line here, both Afghanistan and Pakistan remain client states of the United States. Both remain deeply troubled places with weak central governments not capable of neutralizing the terrorist elements in their midst.

O'REILLY: But there is more to it because Mr. Earnest is not being honest with the American people. All right, the Taliban in Afghanistan live in Pakistan primarily. That's where their sanctuaries are. They live right next door to the Pakistan Taliban. It's the same crew. So it's disingenuous to put forth that kind of malarkey. And that offends me deeply -- Rosen.

ROSEN: I think you're easily offended, maybe not in this case, but we can come back to that. The other complicating factor here, Bill, is that this is a nuclear armed nation, Pakistan. And the risk of terrorists quote, "getting the keys to the nuclear arsenal" in that country aren't much diminished from when Secretary Hillary Clinton used that very phrase.

All right. Let's get to Cuba. President Obama going to normalize relations with the Castro brothers but some in Congress are saying they might try to stop that. What do you know, Rosen?

ROSEN: Well, today's announcement fell into three parts, Bill. The first was the Cuba released Alan Gross, the 65-year-old contractor for USAID who had been imprisoned in Cuba since 2009. The Obama administration said that was done as a humanitarian gesture.

And the second part of this was a prisoner swap of which Gross was not a part. The U.S. released three Cuban natives who had served as spies for Cuba who had been in prison for over 15 years here in the United States in exchange for Cuba releasing one American who had been a spy for us and imprisoned in Cuba.

The third and most central part was President Obama's announcement of dramatic changes to American policy towards Cuba, much of which has been in place since the era of JFK.

The bottom line here, Bill, yes, the U.S. is now moving towards normalization of relations with Cuba, complete with an American embassy in Havana at some point. The U.S. will also reevaluate whether Cuba should remain on the State Department's list of nations that sponsor terrorism.

But if you look at the State Department's 2013 annual report country by country on human rights, this remains an authoritarian country that practices just about every abuse you can think of on its citizens.

O'REILLY: Yes. I mean sure. And the President's rationale if they see more Americans and more Americans go to Cuba, that will undermine communism more than the embargo which really hasn't done much in 50 years other than impoverish the Cubans. I don't think that's a bad point. It will be interesting to see how Congress deals with it.

ROSEN: Oh, I do. And instant karma is going to get you.

O'REILLY: Ok, it's not going get me, because I'm a good guy. But Putin is a bad guy. And now the Russian economy is collapsing, including their currency, the ruble. Why is that happening, Rosen?

ROSEN: Well, really for a variety of reasons. Their boiling point was reached this week when Russia's central bank announced it was hiking its key interest point from 10.5 percent to 17 percent, the largest such increase in 15 years.

It's intended to prop up the Russian currency, the ruble, which has plummeted against the dollar really to a couple of things. Number one, falling oil prices around the world. And that's so key to the Russian economy. And also the sanctions that the U.S. And the European Union imposed in the wake of the Ukrainian crisis. Those sanctions are going to get tougher by week's end. Mr. Obama's going to be signing the measure.

O'REILLY: Yes, let's pile on them. Pile on Putin.

O'REILLY: And it's karma because Putin is a bad guy. He's killing people, invading countries he shouldn't. And this Russian economy could go. This could be a depression, not a recession.

ROSEN: Are you a Buddhist, Bill?

O'REILLY: Am I a Buddhist.

No, but I admire some of the eastern philosophies. And I do believe in karma. You know, and that's why we're reevaluating your appearance on this program. But no, no, no, no.

ROSEN: Do you have a mantra?

O'REILLY: I do. And it's Cameron, because he is up next.

All right, Cameron. I'm glad you didn't doze off during Rosen.

O'REILLY: A judge, a federal judge has now I guess issued a report that says President Obama's executive order on illegal immigration, saying that people can stay here and they're not going to be deported is unconstitutional. Is that what happened?

CAMERON: That's what he said. His name is Federal Judge Arthur J. Schwab. He is in the western district of Pennsylvania courts out there in Pittsburgh. He wrote just this week that President Obama's unilateral action deferring deportations is unconstitutional and he says it violates the separation of powers in the constitution. But he also complains in his words that, quote, "It provides for a systemic and rigid process by which a broad group of individuals will be treated differently than others based upon arbitrary classifications rather than case by case examination. And B," he wrote, "it allows undocumented immigrants who fall within these broad categories to obtain substantive rights." That's a no-no under the constitution. The Justice Department --

CAMERON: Well, he was dealing with an individual case of a Honduran man, an individual deportation case. Because of that it means that what he wrote doesn't really have the ability to nullify the President's actions. The Justice Department said what the judge did is flatly wrong and it has no basis at all to issue this order.

Democrats take shots at Schwab. They note that he was appointed by George W. Bush. They also note that in 2008 he got one of the lowest ratings possible for a federal judge by the bar association in Allegheny County outside of Pittsburgh. And in 2011, he had to excuse himself, recuse himself from 17 cases that he was actively involved in because he was accused of bias.

He does become the first federal judge to weigh in on Obama's immigration actions.

O'REILLY: All right. But he really doesn't have any standing.

O'REILLY: Because there was no blanket lawsuit. It's just an individual case that he was hearing. All right, Cameron and Rosen, everybody.