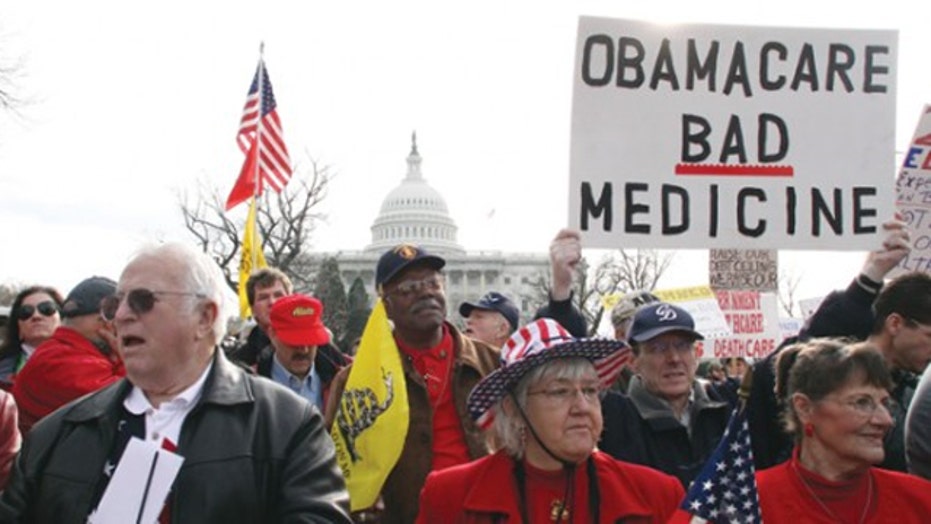 LARRY GLAZER: Brenda, you only get one chance to make a first impression. The first impression of ObamaCare has been a disaster. It started with a botched enrollment process. It's evolved into horror stories of canceled policies and soaring premiums, losing your doctor. The American people aren't buying it. Their interest in support of this policy is waning. They're regretting the policy, and so should we.

MELISSA FRANCIS: Absolutely. The number that everyone should be focusing on is 20 percent. That's the number of people who signed up, who are young and healthy, who are 18 to 24. And I bet that number, those are 34-year-olds. There aren't a lot of very young people that have signed up. They're the ones that are supposed to pay for everyone else. There is no mechanism to collect the fee from them if they don't, the tax. They have to file a tax return and be getting a rebate in order for the IRS to get their money. A lot of 18-year-olds don't have jobs, or they're getting paid in cash. The system is in trouble because of this.

GARY B. SMITH: Exactly. We will end up footing the bill. The problem. The is it's a bill that is an abysmal failure. I'm trying to look at the bright spots of this. Where is the good stuff? But again and again I encounter, quite honestly, lies. Look, just a couple I assembled, annual premium savings of $2,500 per family. That's not going to happen, study after study has shown. No increase in the deficit. Government accountability office says it will increase the deficit $6.2 trillion. If you like your doctor, you can keep your doctor. Let's not even go there. Insure the uninsured. No, the CBO says 25 to 27 million people will still be uninsured and finally Brenda, we talked about approval. Forget all that. The American public just doesn't want it. Ninety two percent either want to change this or repeal it. So we have a law that has absolutely on benefits that the public doesn't want and we're still living with it. I can't understand it.

DAVID MERCER: Well, it's a poll that's based on news they may hear or stories they may hear. To the extent some of those stories are misleading. You have Julie Bunstra from Michigan who did an ad against a Democratic congressman running for the senate that said that her premiums were going up. It turns out her premium on the affordable care act exchange went to 357 from $1,100 from before. Or Benny we heard of, in Spokane, by Republican Cathy McMorris Rogers in the state of the union response lamenting how she is now paying a premium of $700,000. Guess what, we come to find out she did not go on the exchange and only got a policy shot to her by the insurer she had before. So people need to go and need to go on the exchanges. That's why you have 3.5 million people who have been on the exchange who are seeking access to affordable care. The more you hear those stories, the more you will see the change in the polls.

JONAS MAX FERRIS: There is definitely horror stories. There's also good stories, where somebody who couldn't afford insurance or who hit the limit on their old policy now can get insurance. Let's go to the issue, why should people like it? I don't like my car insurance. I haven't had an accident in decades, I'm paying premiums every year. This is insurance. If we liked it, then the government is footing the bill. That's why everyone likes Medicare more than this. This thing, we have to pay, young people, healthy people are paying for sick and older people. It's not heavily subsidized by taxpayers and that's why we don't like it. It's like if my state said, 'Oh, now you have to cover people who have had with drunk driving accidents. They're allowed to get insurance now. My premiums will go up. I wouldn't like that, but that's essentially what was laid down on people. There's some beneficiaries and some losers.

MELISSA FRANCIS: Absolutely. The joint committee on taxation looked at the numbers. They said it would add $3.4 trillion to the economy over the next 10 years. They said it would create 2 million jobs. For the average family that might make $50,000, it would add $1,300 to their pocket. It makes a lot of sense, but you know, Washington isn't going to do it because they love to spend my money, this would be less of my money for them to spend. It will never happen. It would be a dream.

JONAS MAX FERRIS: Definitely. Look. We have a terrible tax code with all kinds of complexity. It requires hiring accountants, who would be, some of them, out of a job if we did this.

DAVID MERCER: It is time to simplify our tax code, but I don't think this new GOP reform bill on tax reform gets us anywhere near that. In fact, it does little to get rid of incentives to ship jobs overseas rather than creating jobs here in the United States. You still have the tax haven rate of 1.25 percent, which encourages money to still be laid off overseas and not here. So this may be a tax boon, or this may be an economic boon for corporations, 26 of them that didn't in the last 25 years create taxes. But for the American family and for the small business, I don't see Main Street going for it and you also don't see Wall Street going for it, which is unique to have both at the same time being resistant to it.

LARRY GLAZER: Absolutely, Brenda. Look, our current system is so complex. If you were to print out the entire tax code, it would be over 70,000 pages and that's up 100-fold from where it was in the late 1930s. If you look back at the last time we had meaningful tax reform in this country, it was during the Reagan administration, which at least one of the greatest economic boons we've ever seen. Wage growth for the middle class. We saw job creation, economic growth. Nothing that we've seen in the current period compares to that. So perhaps we should change the failed policies and re-visit past policies that were successful and try something that worked once and for all.

GARY B. SMITH: I do. I'd like it flatter to be honest with you. This is a step in the right direction. I was puzzled by David's comment, he said Main Street wouldn't like it. I think Main Street would love it. I think anyone filling out their own taxes would be, they would greet this with a lot of eagerness to be able to say, 'OK, here's what I made. 10 percent I send it in, the back of the postcard.' What about all the small businesses and entrepreneurs out there. They would love it. Rather than wading through the paper to figure this stuff out. As people have alluded to, this never going to happen. The reason is politicians need elected. One of the ways they get elected is by money from these political action groups, like the realtors and the people pushing for the home mortgage and the accountants and tax lawyers and people like that. So it's become a give and take kind of thing, a deal making document. It's ludicrous. I'd like to move there for Jonas' point. I pray it happens in my lifetime.

TAXPAYERS IN CA LASH OUT OVER SCHOOL SUPERINTENDENT'S $663K COMPENSATION

GARY B. SMITH: Brenda, wherever there is politics, this is going on, especially when it comes to school boards and school elections, which is essentially a monopoly. Look. The facts are these, people talk about voting the school board out. That'd be great, but in the last election, 7 percent of the voting population showed up. Instead, this school board is backed by a political action construction company that places their candidates on the board so they can throw businesses to that construction company. The real root of the problem is these parents have no choice for their kids there. This is a monopoly. If there was free choice, a voucher system in our public education, instead of a monopoly run by these cronies, you wouldn't have these town hall meetings with that kind of tone.

MELISSA FRANCIS: I know. It's so easy to point the finger at him. I mean, he's filed for personal bankruptcy, yet he got this loan for almost a million dollars at 2 percent. Who can even get that? But really, we should be angry at the board that gave this to him. He took what's offered to him. It's the board that gave him all this money and the folks that voted all of them in. There is a lot of responsibility to go around.

LARRY GLAZER: Yeah, this is a textbook example of government gone wild. In this case, you literally lead the fox into the henhouse, they stole the eggs from all the children in the school system. The problem is, Americans are not prepared for retirement. You have a handful of people getting these cush, golden parachute packages. At the same time, you have municipalities, like San Bernardino, Detroit, filing for bankruptcy. We can't afford it. There is no accountability for this process.

on investment and whether or not their children are having, gaining higher performance scores or test scores, then it may be justified in their mind, but if it's not happening and they're not performing, then they need to get a new superintendent and to reduce the amount they're paying that superintendent on performance. But they have a choice.

JONAS MAX FERRIS: Who is underpaid in my opinion. Look, we don't really know what this... What if you found out this guy saved $10 million out of the budget, and he was going to get a cut for doing that? You'd be like, 'Well, that's what a CEO would do, oversaw that kind of a budget.' I don't know why you have to take a vow of poverty to work at these large corporations and these schools and city areas. I'm not saying he was good. I'm saying we should give him the benefit of the doubt.