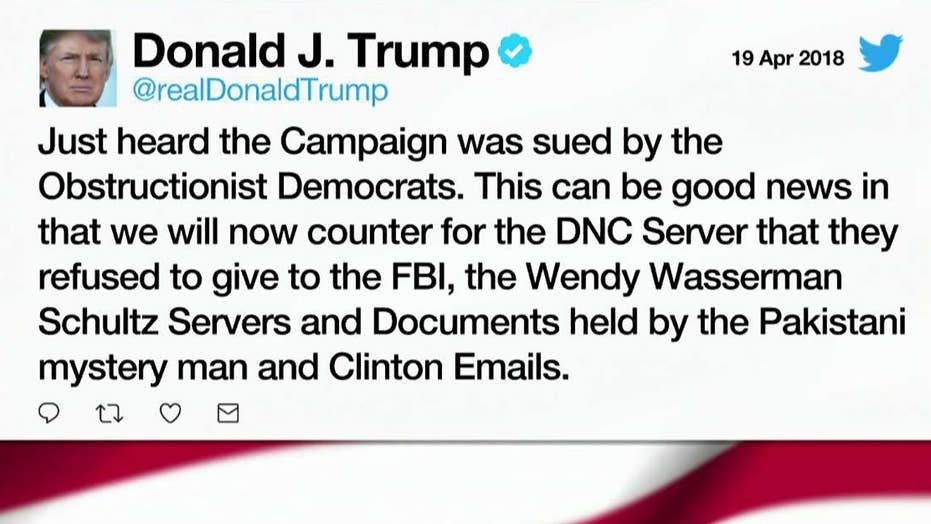 This is a rush transcript from "Special Report with Bret Baier," April 20, 2018. This copy may not be in its final form and may be updated.

RACHEL MADDOW, MSNBC: Do you think these memos are part of the evidence that a prosecutor, Robert Mueller or somebody else, should be considering when determining the president's intent?

JAMES COMEY, FORMER FBI DIRECTOR: It's my recollection that is the evidence that would be used if there was ever a proceeding. These would be to show that I wrote it down at the time to bolster the credibility of my recollection.

BRET BAIER, ANCHOR: James Comey talking about the memos that were released to Capitol Hill. Now there is an inspector general report we can confirm into how he handled those memos and whether they were classified at the time.

At the same time the Democratic Party has filed a lawsuit, and they are suing this list of people -- Donald Trump Jr., Paul Manafort, Roger Stone, Jared Kushner, Rick Gates, the Russian government, the Donald Trump Campaign, WikiLeaks, and George Papadopoulos. All of those people named in the DNC lawsuit and even some Democrats on Capitol Hill are having an issue with that.

REP. JACKIE SPEIER, D-CALIF.: I actually think is lawsuit is ill-conceived and I am not very supportive of it. I think we have a very serious criminal activity under way in this country by the Russian and possibly by those within the Trump campaign. And to make this political is actually the wrong thing to be doing. I am not interested in a political tit for tat. I am interested in getting to the truth. And if there is criminal conduct that has been engaged in, holding people accountable.

BAIER: With that, there's a lot of news to get into. Let's bring in our panel: Tom Rogan, commentary writer for The Washington Examiner; Leslie Marshall, syndicated talk radio host, and Matt Schlapp, contributor with The Hill.

OK, Matt, let's start with the DNC. Some people saying this is a fundraising gambit. Other saying this is an effort to get people deposed and continue this thing even if these investigations wrap up. How do you see it?

MATT SCHLAPP, THE HILL: It is the dumbest political move I have seen in a long time because it makes it all about politics. Those of us who go on TV every day and explain that this investigation with Russia is a canard and it's about the Democrats making politics, the DNC just confirmed it. And the irony of this is Trey Gowdy said earlier on Fox, is the irony of that is if anybody has a beef on collusion and rigging something, it's Bernie Sanders with what the then DNC chairman Debbie Wasserman Schultz did with that nominating process. So I can't get inside their head to see what their motivation was, but as a Republican, it's pretty stupid.

BAIER: You share that opinion with the president of the United States. Within the past few minutes, actually seven minutes ago, he just tweeted out, "Just heard the Campaign was sued by the obstructive Democrats. This can be good news in that we will now counter for the DNC server that they refused to give to the FBI. The Wendy Wasserman Schultz servers and documents held by Pakistani mystery man and Clinton emails."

Debbie, I am sure he is talking about Debbie Wasserman Schultz, but the president obviously weighing in, saying they will go after the Democrats for all of that.

TOM ROGAN, THE WASHINGTON EXAMINER: Look, it's inherently politicized now. And I think the blurring, most people watching this, certainly my grandfather last night when I was watching this show with him, it's the perception that everything, whether it be McCabe, Comey, the president, the DNC today, comes together and it's inherently politicized. And the problem with that ultimately is that when the final decision comes, whether it be from Mueller or any of these investigations, a lot of the country is just not going to believe. And so the credibility of institutions, and the capital behind us, that is something that is suffering here.

BAIER: In the Comey memos, January 28th, 2017, one of the memos he says this, I explained that he could count on me to always tell him the truth, talking to the president there. I said I don't do sneaky things. I don't leak. I don't do weasel moves. Obviously he leaked these memos to his friend. Now there is an I.G. investigation whether those memos contain classified information.

SCHLAPP: Right. And he didn't tell the president this sex stuff, the dossier, was funded by the DNC and the Hillary Clinton campaign and his political opponents. And obviously Jim Comey went before Congress on two different topics in two separate months, sequential months, gave different answers as to whether or not the president put political pressure on him to open or shut the investigation on Mike Flynn.

The problem with Jim Comey is he has an amazing lack of how he is coming across to the American people. He lacks so much credibility. And I think these memos do nothing, nothing to add anything to his side of the equation that somehow the president was acting inappropriately.

BAIER: Democrats say they show he has the same thoughts then as he has now and he wrote it down extemporaneously at the time.

SCHLAPP: He lied to Democrats in Congress. On two occasions he gave different testimony in May of 17 than he gave in June of 17. He's got to deal with Congress on that.

BAIER: Let's see if I can get this one. House Committee Chairs Goodlatte, Gowdy, and Nunes on the Comey memos, they write this, "The memos show former director Comey never wrote he felt obstructed or threatened. He never once mentioned the most relevant fact of all which was whether he felt obstructed in his investigation. The memos show Comey was blind to biases within the FBI and had terrible judgment with respect to his deputy Andrew McCabe. On multiple occasions he in his own words defended the character of McCabe after President Trump questioned McCabe." Leslie?

MARSHALL: I have to say that when I heard he was writing a book, I was hoping he wouldn't do some of what he did. Two of the things that bother me as a Democrat are, one, really stooping to the juvenile level of the president's tweets, talking about his hands, talking about his hair. Two, even talking about Russia or obstruction of justice can obstruct in a sense the entire investigation and derail what has already been done. So I definitely have a probably with that.

It's obvious that this man was angry that he was fired. Many of us are. Many people in Washington write books afterward. I don't think that Comey has helped himself with this if he is planning on running for office. But I don't think it's going to weigh into it. Democrats I think quite the opposite. Republicans wanted these memos released. If anything I don't think it makes Comey look as bad as the president based on the president's response and the president's behavior according to those memos and really caring more about himself and coming off as paranoid.

BAIER: We'll see how this all goes. Again, I interview Jim Comey on Thursday.