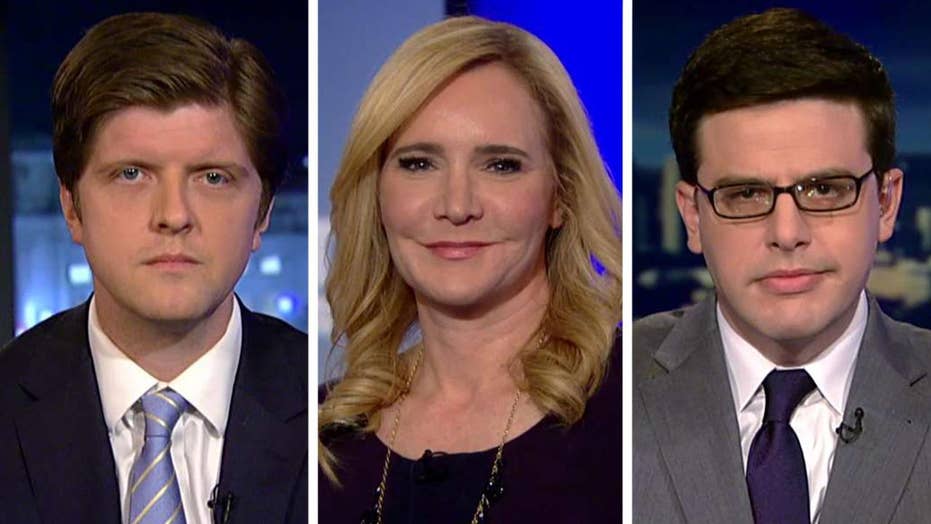 Is President Trump to blame for America's tense political climate? Reaction and analysis from the 'Special Report' All-Stars.

This is a rush transcript from "Special Report with Bret Baier," October 25, 2018. This copy may not be in its final form and may be updated.

PRESIDENT DONALD TRUMP: Those engaged in the political arena must stop treating political opponents as being morally defective. You have to do that.

WHITE HOUSE PRESS SECRETARY SARAH SANDERS: The president is certainly not responsible for sending suspicious packages to someone, no more than Bernie Sanders was responsible for a supporter of his shooting up a Republican baseball field practice last year.

FORMER CIA DIRECTOR JOHN BRENNAN: I'm tempted to say that was said by Donald who?

I think it's very important for an individual who is in the Oval Office today to say exactly that.

JAMES O'NEIL, NEW YORK CITY POLICE COMMISSIONER: Law enforcement professionals do not care about the politics behind these acts. What we do care about is keeping the public we serve safe.

BRET BAIER, ANCHOR: Some of the sights and sounds there, reaction to these packages that are popping up all over the country, with now 10 confirmed by the FBI. Added today, two to the Vice President Biden in Delaware, and one to Robert De Niro in New York City. Obviously, Robert De Niro a big Trump critic.

The president pushing back on this notion that he is behind this somehow as far as stirring the environment. "A very big part of the anger we see today in our society is caused by the purposely false and inaccurate reporting of the mainstream media that I refer to as fake news. It has gotten so bad and hateful that it is beyond description. Mainstream media must clean up its act fast." A there was a lot of commentary on that.

OK, Matthew, thoughts on what has transpired and where we are now in this discussion.

MATTHEW CONTINETTI, WASHINGTON FREE BEACON: I think the fact that we don't know much about who sent the bombs and what his or her ultimate purpose was has led to a lot of speculation and a lot of crossing charges about whether it is the climate, whether it was language from the right, language from the left.

I think from the 30,000-foot view, Bret, Trump's appearance on the public scene three years ago seems to have ripped off the shroud that obscured a lot of latent tension between the left and the right in the United States. And since he came down the escalator, you have had insightful comments from both the right and the left, and you've had violence from both of the extreme right and the extreme left.

If you actually look at most normal Americans, they're nowhere as pluralized as it seems the extremes are. And so I think people in Washington need to think very seriously about how we get over this moment, because not only do you have these cultural clashes, and the harassment in the restaurants, you have mob violence, you have assassinations like this. You have the geographic separation. You have a culture forming within the city is in their suburbs, and then a separate culture forming about 30 miles outside downtowns. And that I think when you look in American history is not a good thing to have.

VICE PRESIDENT MIKE PENCE: As President Trump and I made clear, we condemn these attempted acts of violence in the strongest possible terms. They have no place in American society.

PENCE: The president has directed the full resources of the federal government. The FBI, the Department of Homeland Security are all working closely with local law enforcement. And I promise you, I promise you we are going to continue to bring all of our energies to bear it. This is the FBI's highest priority. They are already tracking down leads.

BAIER: They are pointing to tracking down leads. I talked to some people that say they think it could be just a couple of days because all these things are intact.

A.B. STODDARD, REAL CLEAR POLITICS: I think everyone trusts that the administration is taking this seriously and making it a priority. And the president said in his appropriate remarks that somebody wrote for him that he read off the teleprompter, that his priority, his number one job is to keep us safe. Everything he said last night was the right thing.

The tweet this morning does what he always does, which is to double down and take in, and in a reflection of his personal grievance instead of putting the country first. None of this is President Trump's fault. Have the Democrats said horrible things? I completely agree with Matt. Maxine Waters and Hillary Clinton are especially complacent. President Obama and Vice President Biden have said divisive things. Everyone is guilty. I cannot believe what has come out of Rush Limbaugh and Ann Coulter's mouths in the last 24 hours.

It doesn't matter who did this. I would love him to be caught, or her, I would love them to pay the price. But the point is that the burden is on the president, he has a higher responsibility than Nancy Pelosi or any of these people. He has to say this is incredibly dangerous and he has to cool it down. Blaming the media is not good enough.

BUCK SEXTON, FORMER CIA ANALYST: The conversation about civility got drowned out very quickly. It didn't really last more than a few hours before they jumped beyond not just assuming that the perpetrator is probably of the right, a Trump supporter, that is in widespread assumption most the media coverage that you see, but that the president is responsible.

So we have gone beyond even just we don't know who did this, we have no idea what their real motivation was or what their purpose was to, really, Trump is somehow directly responsible for this as incitement. They are not saying that he built the bomb. He obviously didn't have glass shards at home and was constructing this thing on his own. What they are saying, rather explicitly, there were CNN chyrons today that referred to Trump's hit list. There were chyrons that said the president wasn't taking personal responsibility for this. That is people claiming that the president has a direct causative effect on this.

And in this overall climate, I'm sorry, but there isn't equality here in terms of how much moblike behavior and crazy rhetoric is coming from both sides. The president fights back, and that means the president sometimes maybe goes a little bit further than most people, including his supporters, would want. On the left you have mobs on Capitol Hill, mobs on the street, Antifa on both coasts, people who are claiming the president is a traitor, the president is a rapist, the president is a racists, and this has been going on for 18 months. At some point they have to understand that this is a much larger conversation than just what the president tweeted this morning.

BAIER: Sure, and obviously we can play a lot of sound bites of Maxine Waters and all kinds of people saying the civility thing, and saying what they said before. We can do that all day. We do it sometimes here on the panel. Matthew, and we often look through things through a prism of politics here as we are 12 days from the midterms. Some people today were saying that this, just this element has blunted the momentum that Republicans were starting to close the gap, even just this coverage. The important thing is that this person is found and nothing goes off and no one is hurt. But look at that just for a second.

CONTINETTI: There is a political dimension to this. And I don't think it is the consequences that Democrats are hoping for here, and for this reason. If you go to the last time of widespread political violence in the United States it was in the late '60s and early 1970s. What happened during that period? In fact the public rallied around the force who represented authority and law enforcement. In this case it was President Nixon, a politician who President Trump has something in common with. And so we might find the counterintuitive result that the more this gets out of control, and I fear it is getting out of control, and we should all worry about it, actually it will benefit the forces that are aligned with President Trump and the Republicans.

BAIER: You think it goes the other --

STODDARD: I think that someone could have died in a mailroom or on a security detail, and then it would be much more sober assessment of what we are talking about. People on both sides are complacent, President Trump included. His rhetoric is extremely divisive. I think Hillary Clinton and Maxine Waters and everyone, both sides, need to own up to how corrosive it is.

SEXTON: Congressman Steve Scalise almost bled out on a baseball field a few miles from where we are now. Did the conversation change after that? Did the left insist, did the Democrats change their tone? I don't think so.